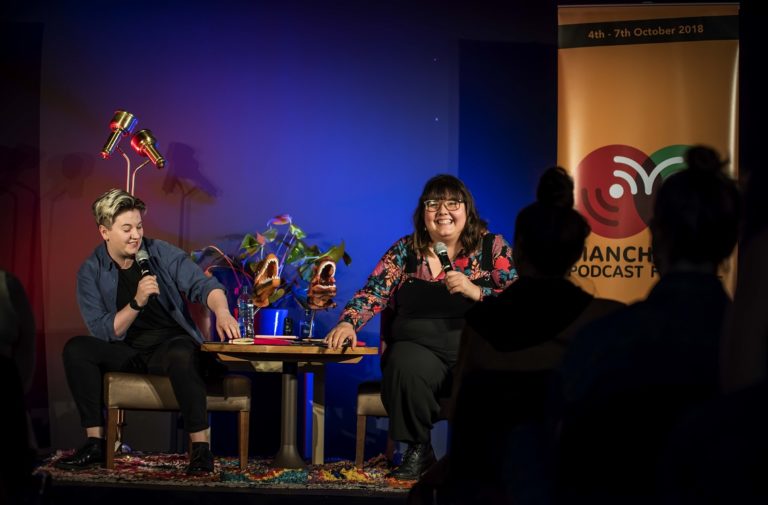 I sent these questions via email to Mitchell and Hagen and love their responses. I hope you do too!

How did you meet?
SH: Oh no. I don’t actually remember. My earliest memory of Jodie is when they did my other podcast, Made of Human. But we must have met before that. Jodie, do you remember? I mean, you must remember, seeing as I was probably a hero of yours and meeting me the first time must have meant the world to you?
JM: We met about three years ago at a gig we were both doing, and there was a very persistent guy who wanted to book Sofie for another gig, and I was terribly noble and suggested we go to the chippy to avoid him. There I purchased a large bucket of novelty seafoods in order to try and impress her, because she was probably a hero of mine. There was eel in it; I felt sad.
SH: Oh yeah, I DO remember that. Not! I like eel.

What gave you the idea for the podcast?
SH: We improvised it live on stage during a show in Edinburgh. I was talking about an interview I did where someone asked me what my favourite dinosaur was. And instead of saying its name (Dilophosaurus) I, for some reason, decided to make an odd hissing sound with accompanying hand-claws. It ended up being shown in a video full of comedians saying these long, complex dinosaur names, sounding all clever, with me interspersed, making an aggressive hissing sound. So Jodie and I started discussing dinosaurs and queer identity and daddy issues and it felt like we could talk forever about it. And make it funny.
JM: I was having trouble focusing because I was on so much cold and flu medication during the aforementioned improvised podcast episode, due to having Edinburgh Fringe Festival-induced pneumonia. I think that helped me access the subconscious part of my brain that knew that a dinosaur-themed comedy podcast about trauma was what the world needed. And I mean, daddy issues, feminism and queer identity were never going to NOT be in it, you know?

Do you refer to a different kind of dinosaur each time? Are you worried you’ll run out?
SH: Weirdly not. Because we sometimes refer to very specific dinosaurs – as in, not even a specific species but an actual specific skeleton. Like SUE the non-binary T rex, a skeleton of a T rex that was misgendered for years. They have a Twitter account and everything.
JM: I did worry about running out momentarily, but then I learned that in 2006, someone named a new dinosaur using the Harry Potter series as inspiration. It’s called Dracorex hogwartsia, which translates as “the dragon king of Hogwarts”. I don’t think we’ll run out.

Is it just daddy issues, or do you cover other topics too?
SH: It’s everything, really. The podcast is really about Jodie and I coming to terms with our identities. Be it gender identity, sexuality, trauma, personality. Like, I will have a thought and immediately message Jodie and say: “I just felt really weird about being horny – and I realised I couldn’t speak to anyone about it. Do you think there’s any shame linked with being horny when you’re not a man? Should we discuss this on the podcast?” and Jodie will say: “YES, I know what you mean! Let’s do it!” and throughout the planning of the episode and the recording, I will full-on develop as a human.
JM: We talk about anything and everything that we want to talk about – obviously it’s a comedy podcast, but it’s also about us getting to explore stuff for ourselves, and finding out how we relate to certain topics. I came out as gender-queer in a gender identity episode and I didn’t even plan it. It’s such a safe and hilarious space, and it just hit me that, yep, I really do really relate to this. But there’s always a healthy underpinning of daddy issues, of course.

Do you have a favourite episode?
SH: I really enjoyed episode 10 about gender identity and gender confusion. It felt very raw exploring those things on stage. And I love, love, love joking about things that are essentially quite scary.
JM: Episode 11, which was about virginity. It’s a social construct, people! If there’s one thing I love to dissect and joke about, it’s a good, old fashioned, social construct. And Sofie and I have basically the same opinions on so many things, so it’s really fun and interesting when we find topics that we’ve had very different experiences of … or at least, seem to have had different experiences of if you’re going to be all superficial and basic about it.

Is there anything that hasn’t worked?
SH: Yes, we sometimes need to record the audience clapping underneath us reading the credits at the end. I tried to make the audience say the words “clap clap clap” instead of them doing actual clapping. It didn’t work.
JM: I’m using the entire podcast as a lure to get my dad to come back. It hasn’t worked.

Do you have any plans to transcribe the episodes to make them more accessible? Do you have any other ways that you’ve made the podcast and the recordings accessible?
SH: Oh, absolutely! Thing is, we wanted to be free of advertisements and we wanted to self-produce and we didn’t want any bigger podcast platforms to have any rights or any say in how we do the podcast, which also means chucking a bunch of our own money into it. Once we actually start making money (if ever!), we can afford to pay transcribers. And it’s definitely FIRST on our list. Same with our live recordings – we are currently not in an accessible venue. It’s very queer- and anxiety-friendly, but it’s not wheelchair accessible. The accessible venues are just more expensive to get a hold of, so that’s another thing we’re aiming for. That was a long answer. Short answer: absolutely. That’s our goal and we are very aware of it.
JM: Sofie’s done a good job of summarising here! But yes, it’s top of our list for sure. Making the podcast as accessible as possible is dead important to us, and we want our live recordings to be safe for everyone, so we have content warnings at the beginning of them if they’re needed and we try to check in with our audience where we can. There’s definitely more we want to be doing, so watch this space!

What else are you working on?
SH: I have just finished my book Happy Fat which will be out in May 2019. I am then going on a book tour of the UK called Bubblewrap/Happy Fat which is part standup, part book reading and Q&A. I have got a new show that I am taking to Edinburgh Festival in 2019 called The Bumswing. I have my other podcast Made of Human which is just a conversation about life between me and someone I like or find interesting.
JM: My Drag King troupe Pecs is bringing our new show Sex Sex Men Men to The Yard Theatre from the 25 February to 9 March, which is all about masculinity and gender and sex(iness). I’m also touring with my all women and non-binary queer comedy collective The Lol Word, and you can still catch our Prom Special at Vault Festival on the 15 February and 15 March, before we take it up to the Edinburgh Festival later this year.

What’s your favourite dinosaur?
SH: HIIIISSSSSSSSS.
JM: It’s got to be Kentrosaurus. Such a complex dino. So many spines.

Is there anything I haven’t asked you that you’re burning to tell me?
SH: I just want to flag up that one of our favourite segments of our podcast is probably The Ross Geller Corner of Shame which is where we place the palaeontologists who are quite toxic in their behaviour. You wouldn’t think that there were that many, but…!
JM: Sofie keeps writing fan fiction about Paul Hollywood and tricking me into reading it live on the show.