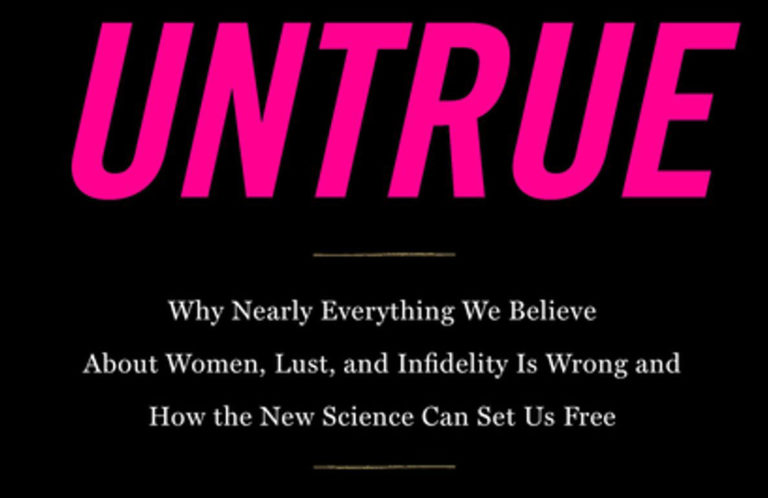 Men are promiscuous, with a high sex drive. Women are submissive, with a low sex drive, designed to stay true to one person.

This is the central premise of Wednesday Martin’s latest book Untrue, published by Scribe. She immediately subverts this premise, tackling everything from biology to plough agriculture, overturning years of scientific and sociological thinking on what women ‘naturally’ want and need in their love lives. It’s a lot of ground that Martin attempts to cover, and she does so by also inserting accounts of her own journey and questioning of her marriage along the way.

The first subject under scrutiny is monogamy. Martin attends workshops and talks with psychologists and psychotherapists, all of who insist, in one way or another, that non-monogamy is a perfectly healthy relationship structure. She immediately discloses her own squeamishness in regards to the topic, and a lack of desire to explore the concept herself, despite her husband’s positivity towards the idea. It sets the scene for a personal journey for Martin into the inequalities women face, both historically and on a more personal level through a series of anecdotal contemporary stories.

Here comes the plough. Martin asserts this as the first moment of true difference between men and women; as certain cultures began to turn to agricultural practices that required the use of a plough, the only key physical differences between men and women became prominent. Women, who had lower grip strength and throwing velocity, were relegated to secondary production – cooking, cleaning and childbearing in the home. This is such a compelling chapter in Untrue; the turning of women from equal contributors to property that must be controlled, becomes inexorably linked with the need to protect ownership and inheritance. This was something that emerged in alignment with agricultural practice, as people began to own and work their land. Ensuring paternity became paramount, and therefore the notion that women’s “natural place” was in the home began to assert itself. Martin discusses how our very biology has altered as a result of these changes, causing us to become more physically suitable for childrearing. A horrifying yet very compelling concept.

What felt at first to be a personal tale of discovery for Martin quickly escalates into a series of scientific debates around biology, anatomy, sexual practice and more. Martin’s last work was criticised as tinkering with details and not quite satisfying the title of “anthropological study”, and she seems to have tried to go above and beyond in order to rectify that here, as she moves through the work of Meredith Chivers, Alicia Walker, Sarah Blaffer Hrdy, Brooke Scelza, Cacilda Jethá and many, many others.

Martin suggests that the insistence on the idea of women as the submissive, sexually demure or low-libido sex, should be questioned and reversed

An enormous amount of time is dedicated to bonobos, our closest living relatives in the animal kingdom, who she suggests offer us a glimpse of the ‘nature’ of the female species that we have been missing in our socially and politically charged human upbringing. Their ‘uncontrolled’ sexuality speaks to the biology of females, with our clitorises dedicated to nothing but pleasure. As pleasure-seeking beings, Martin suggests that the insistence on the idea of women as the submissive, sexually demure or low-libido sex, should be questioned and reversed.

While there are so many incredibly fascinating case studies described in Untrue, including a whole section dedicated to the non-monogamous Himba women, the structure of the book itself makes for a slightly jarring reading experience. You get the sense that Martin has turned over a lot of really fascinating science, but she doesn’t address much that runs counter to her central argument. As a result the book doesn’t present as balanced. Only Angus J. Bateman really comes under fire, and his work on fruit flies seems a rather low bar (though it is disappointingly still regarded highly by many). Still, the counter points to Untrue’s selection of esteemed thinkers is limited. The book would have benefited from a more nuanced response to other studies out there with human subjects, which might have formed more interesting counter-perspectives.

Also, the integration of Martin herself in the early chapters feels out of place as we proceed through a much more analytical series of chapters. She reintroduces herself at the end as she explores the Skirt Club, an exclusive club for women to explore same-sex experiences without any men present. While Martin manages to get herself an invite, her squeamishness again asserts itself in a counterproductive and slightly annoying way. She spends the entire time telling us how tall all these women are, and doing her best not to actually participate, while also not telling us much of interest about these women who are more willing participants. It’s a missed opportunity, and feels uncomfortable for those of us who might not think of same-sex encounters as quite so ‘taboo’. Martin’s insertion of herself into the book doesn’t ultimately aid our understanding of the argument she wishes to explore.

Martin doesn’t just awkwardly insert herself – she also inserts a variety of other ‘real’ (but altered for the sake of anonymity) stories from actual people she encounters along the way. As they detail their experiences, it’s hard to tell where the truth of any of these stories really lies. However, they do often add an interesting anecdotal point, even if this jars with the more scientific focus of the rest of the book.

Nevertheless, Martin turns over a huge variety of fascinating science on the subject of female sexual fluidity and fidelity. She acknowledges in the afterword that the subject is much bigger than the scope of one book can allow – her starting and stopping points are necessarily arbitrary. A lot of it isn’t really as ‘new’ as the blurb might lead you to believe, but it is cultivated here in a very readable and interesting way. It offers up so many avenues to explore further. Martin’s Untrue is merely the starting point – and an effective one – into the world of female sexuality, one which has not been investigated or explored enough.

Untrue is published by Scribe and available to purchase through all good book stockists.

The image used is the cover of the book. It has a black background and the title – Untrue’ – appears in block capitals in a hot pink font. The sub-title ‘Why Nearly Everything We Believe about Women, Lust, and Infidelity Is Wrong and How the New Science Can Set Us Free’ appears in smaller white font beneath the title. Below this is a circular image of part of a person’s face. They have long, blonde hair, red lips and they are casting their eyes downwards in what could be described as a thoughtful expression. Their fingertips are resting on their chin. Below the image is the author’s name – Wednesday Martin – in the same pink font as the title. Below this, in smaller white font, there is more text which reads: ‘Author of the #1 New York Times bestselling author of Primates of Park Avenue’.