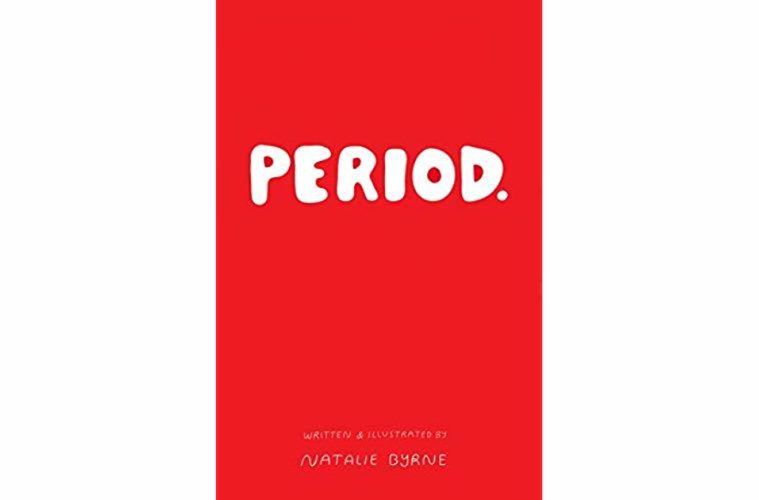 Breaking the silence around menstruation

Jenna Kirby considers the impact that a book like Natalie Byrne’s Period. could have on a reader’s relationship with their own body

There’s no doubt about it: carrying Period. by Natalie Byrne around with me for a week has resulted in a number of odd looks, glances in the staff room and even surprised questions from friends and family. But that’s the whole point: it’s the reason why the book needed so badly to be written. Because this book is about periods and vaginas, and anything that helps dispel the mystery around this supposedly top-secret organ (that is actually owned by over 50% of the population) can only be a good thing, in my opinion.

While vaginas remain taboo, the health of people with vaginas continues to be dismissed and ignored, and these amazing parts of the human body continue to be stuck with the unfair reputation of being disgusting. This book confronts the issue head on, with Byrne stating that she wanted to write and illustrate a book that she wishes she had grown up with. Truth be told, everyone could do with reading this book – whether they have periods or not.

When I think back to school, I remember urban myths flourishing and spreading like wildfire, but no one actually addressing what was going on ‘down there’. At a time of such significant growth and insecurity, it is vital to give young people the information they need and reassurance that they are ‘normal’, as well as guidance on when to get help. And while Period. is an attractive addition to my bookshelf, and an undeniable conversation starter, the real value lies in the impact a book like this could have on young people’s lives.

Period. starts with a disclaimer which underscores the book’s commitment to open mindedness and non-judgement – something that is delicately carried throughout its pages. Byrne states clearly that, “having a period or not, doesn’t determine whether you are a boy or girl, man or woman”. She also makes a clear effort towards universal representation, with the illustrations depicting a huge variety of bodies of different races, sizes and genders, as well as including under-represented bodies with hair, sweat, blood and visible disabilities. Such images are not singled out or over-emphasised, allowing bodies which are often underrepresented to sit naturally alongside their more frequently represented counterparts.

Byrne addresses the shame that has so long surrounded menstruation that is exacerbated in modern culture by the censorship of its representation on Instagram and used by politicians like Donald Trump to undermine rivals in the political arena. This is why Byrne’s tone is such a breath of fresh air: she confronts the issue head on, combatting the ideology that women’s bodies are purely decorative, even going so far as to discuss bowel movements openly and with cute and funny illustrations. The tone is conversational, and manages to be informative while not being patronising. Byrne also litters the pages with humour, clarifying to readers that the book is “not about punctuation”, for anyone who may have mistakenly picked it up for that reason.

Covering a huge range of topics, Period. addresses medical, practical and social issues – everything from menstrual cycles and period products, to a brief foray into mental health. It encourages young people to get to know their bodies, appreciating their intricacies as well as the powerful work they do, with a repeated emphasis on the fact that every body is beautiful. There are also more scientific sections which break down complex issues into diagrams, but this is never alienating, and is consistently related back to the individual’s experience.

Throughout the book, there is a constant focus on the individual, backed up by personal testimonies, while Byrne maintains that “all bodies are unique and different”, and “all advice is subjective and might not work for you”.

One particularly interesting section of the book, which could have done with further exploration, is the ‘Bloody History’ chapter. Byrne references ancient Greek alternatives to tampons, the Egyptian belief that period blood had magical properties and the Roman belief that menstruating females were “dark witches” – but this feels like an afterthought, and leaves the reader wanting to know more about the weird twists and turns of history in relation to this topic.

Period. strives to help remove the fear that many young people feel about their periods, while reflecting on what a wonderful world it would be if such fear and shame no longer existed. While the book is aimed primarily at adolescents who have or will have periods, and could potentially transform their relationships with their vaginas, there is also a lot to learn for everyone – including me, a 27-year-old vagina owner who has been having periods for 15 years. This is a book we could all do well to learn from.

Period. is written and illustrated by Natalie Byrne and published by Break the Habit Press.

The image used is the cover of the book. It’s a very simple bright red cover with the title “Period.” in white font in the centre. At the bottom of the cover it says “Written and illustrated by Natalie Byrne”.