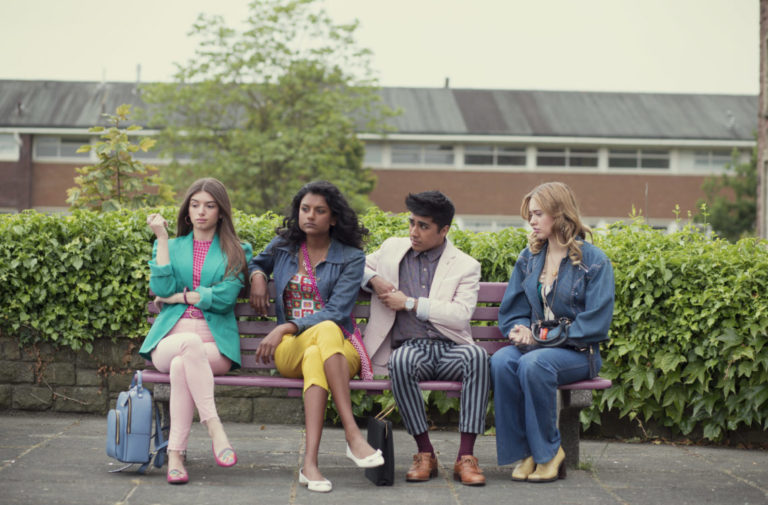 I find Netflix’s coming of age dramedy Sex Education incredibly refreshing. It features a gay second-generation Nigerian immigrant with an exquisite love of drag. It features people from the UK talking about sex. Though criticised for lacking a strong black female lead, its cast is diverse, featuring characters of many different ethnicities. But what Sex Education really gets right, is its treatment of women’s sexuality through its subtle encouragement of women to own their bodies.

Two plotlines hammer this message home. The first is Aimee’s. Aimee is featured in the very first scene of Sex Education, where she is having rampant sex with her then-boyfriend, Adam. Despite her attempts to make porn-esque moaning sounds, Adam cannot manage to come and, much to Aimee’s surprise, ends up faking it. In this scene we see Aimee doing everything she thinks Adam wants, including asking him whether he likes her tits, and whether he’d like to come on them.

Later on Aimee meets “top-heavy” Steve (“built like a Chupa Chups,” she explains), who she thinks is drop-dead gorgeous. When she tries her previous bedroom persona on with him, asking: “Do you wanna come on my face?” and then: “What about my tits?”, Steve looks perplexed, and asks to stop. “It’s just, do you actually want me to do any of that stuff?”, he asks her. Aimee’s lukewarm “Yeah, I think so,” becomes less convincing as she says it. “It just feels like you are performing,” he adds, “Tell me what you want.”

But in perhaps my second-favourite ever scene from a TV show, Aimee does decide to heed Otis’s advice and, after an initial shot showing her hand hovering reluctantly over her unicorn pants, she is seen in various positions masturbating all over her room. Triumphant, she comes to school the next day and says to Otis: “I’ve been wanking all night! I ate four packets of crumpets and I think my clit might drop off. But I know exactly what I want.” The next time we see her with Steve, she confronts him with specific instructions on how to make her orgasm, to which he smiles ecstatically and proclaims: “I’m on it.”

The second story – my absolute favourite – is when mean girl Ruby is being blackmailed by an anonymous person who has sent a picture of her vagina (or “chewbacca vag” as her friend describes it) round the school. If Ruby does not apologise for being a bitch, the blackmailer will reveal her identity. In school assembly the next day, when someone yells out: “I heard it’s Ruby’s vagina,” followed by: “Ruby’s got big beef curtains,” a magical moment happens. Ruby’s long-time frenemy Olivia (who actually posted the photo) stands up and shouts: “It’s my vagina!” One by one the girls in the school follow suit, standing up and claiming the vagina as their own, creating a chorus of “It’s my vagina!” despite the headmaster’s frenzied protestations. The scene ends delightfully with Ezra Furman’s upbeat tune ‘Body Was Made’ which goes: “My body was made this particular way….”, which feels like a tribute to body positivity everywhere.

The reason I love these stories so much is because everyone identifying as a girl can be made to feel so much shame about their bodies. This shame tends to be intensified when it comes to the vagina, which is almost never shown on mainstream TV. Sex Education is one prominent exception to this. And what gets me about the shame generated by women’s bodies is that it results in so many other types of abuse, for example revenge porn, up-skirting and down-blousing, which can often lead to mental health issues and behavioural changes, for example not wearing skirts anymore. Combating these abuses is incredibly difficult when the vagina is as loaded with cultural baggage as it is. In the world we live in it’s very difficult for a person to say: “I’m not upset by this” on seeing a picture of their vagina distributed online, because of the broader connotations of shame, or sluttiness, or inadequacy that such a picture can engender.

However, one potential way of combating the intense harms of image-based sexual abuse such as revenge porn, is for women to refuse to be shamed by it. This is very difficult, since the nature of one’s private parts (for everyone) is very private and personal. However, if women are going to continue to be targeted for abuse in this way, one mode of resistance is women collectively owning their bodies and reclaiming them as ‘normal’. This is no quick fix, mind, but in the long term it might help to situate women’s bodies in a more positive and accepting space in society, rendering them less capable of being shamed, and ultimately closing down some forms of abuse of women.

That is why these two stories in Sex Education are so incredible. They encourage body ownership and resist the damaging narratives that define women’s sexuality as disgusting, shameful or solely for the sexual gratification of others. Bravo, Sex Education, I hope Season 2 continues to trailblaze!

Both images are courtesy of Netflix. The feature image is by Sam Taylor and shows actors Mimi Keene, Simone Ashley, Chaneil Kular and Aimee Lou Wood all sitting on a bench in the street. The image within the text is the publicity image for the series. It shows three young-ish people in a graffiti’d toilet cubicle and has the name of the show, its start date, and the tagline “experience is overrated” overlayed upon it.