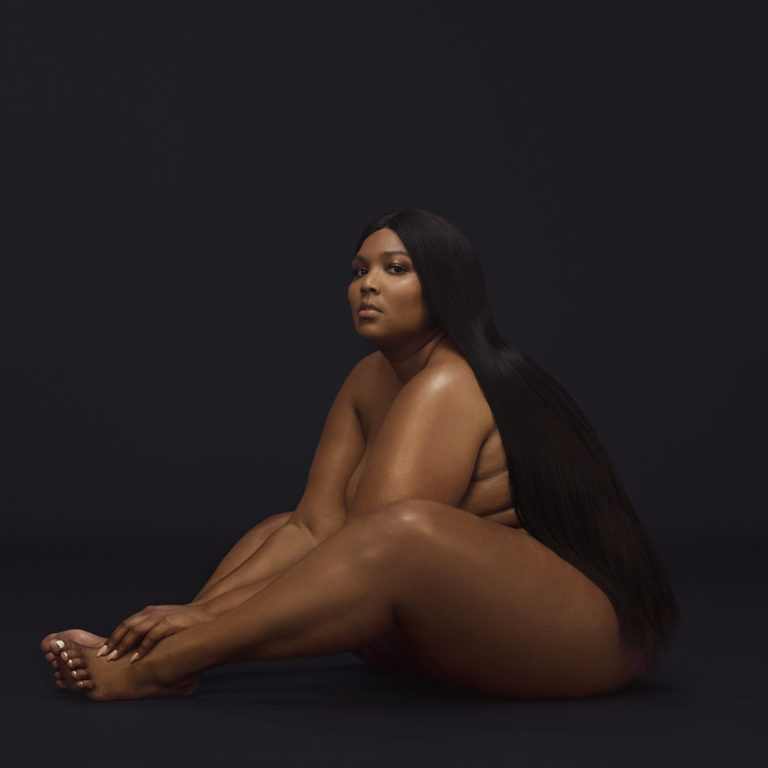 Melissa Jefferson, also known as Lizzo, was born in Detroit and grew up in the world of marching bands and churches, playing the flute and singing. Lizzo is a classically trained flautist and went to the University of Houston with a music scholarship. When asked about how she transitioned from marching bands to hip hop, Lizzo talks about her move to Houston and how hip hop was unavoidable there.

Rapping gave her a social culture and a sense of belonging. She worked with Prince and producer Lazerbeak on her debut LP Lizzobangers (2013) while follow up album Big GRRRL Small World (2015) and it’s follow up EP, Coconut Oil (2016) led to tours with Florence + The Machine and Haim.

Despite not being the typical hip hop instrument, her flute, named Sasha, features on her third album, Cuz I Love You and even has its own Instagram account @sashabefluting with 60k+ followers. Cuz I Love You was released on 19 April and it’s Lizzo’s first album for Atlantic; the result of years of hard work.

The opening title track ‘Cuz I Love You’ sounds like a soulful, classic jazz ballad and isn’t far from the likes of Ella Fitzgerald. The lyrics are playful, and almost a parody of confessional love songs “Never been in love before/What the fuck are fucking feelings yo?” This conversational, vernacular lyric writing is what makes Lizzo’s music so accessible. Her sarcastic, sassy observations and strong feminist viewpoints are at the heart of everything she does.

In an interview, Lizzo says that the term ‘body positivity’ only exists because of body shaming

This is particularly prevalent in her next track, ‘Like a Girl’ which features a hip hop beat and a much more contemporary sound. Here, we hear Lizzo’s empowering rapping “If you fight like a girl/Cry like a girl/Do your thing on the whole damn world”. Inspired by Serena Williams who “plays like a girl” and is one of the world’s greatest athletes, Lizzo turns the negative ‘like a girl’ connotations into something positive and empowering with this track. She also considers non-binary gender in her Apple Music commentary:

When we got to the bridge, I realised there was an important piece missing: What if you identify as female but aren’t gender-assigned that at birth? Or what if you’re male but in touch with your feminine side? What about my gay boys? What about my drag queens? So I decided to say, ‘If you feel like a girl/Then you real like a girl,’ and that’s my favourite lyric on the whole album.

‘Juice’ is one of the first tracks I heard from Lizzo, and I immediately fell in love with the music video. The video is vibrant and funny. It emulates switching back and forth through TV channels, and every channel features Lizzo in roles that would usually be filled by slim, athletic women. This is a fantastic celebration of the female body, and it undeniably promotes body confidence.

The comments below the YouTube video are full of positivity and cite Lizzo as the cure to anxiety and low self-esteem. Lizzo inspires fans to love themselves – not by booking a spa day or buying into the latest beauty product, but by finding inner space. She wrote a piece for THINK, where she says: “Self-care is really rooted in self-preservation, just like self-love is rooted in honesty.” This is a powerful, positive and hopeful message in the midst of the growing public awareness of mental health and self-care.

Songs like ‘Good As Hell’ embody this attitude and broaden US body image ideals. In an interview, Lizzo says that “America’s idea of beauty is very narrow” and suggests that the term “body positivity” only exists because of body shaming. Fashion magazines and teen magazines present an unrealistic image of women’s bodies, and artists like Lizzo are starting to change this through fan-led social media platforms such as Instagram and YouTube. She is also one of only two plus-sized women to be featured in Playboy magazine since the first issue in 1953. She tells her interviewer that “We gotta fix ourselves in the culture so that we’re unshakable. Body positivity has to be mainstream.”

Another standout track for me is ‘Better in Colour’ which encourages listeners to not only love themselves, but to also love others regardless of race, sexual orientation, body type, gender or background. The infectious chorus lyric “You can be my lover, cos love looks better in colour” is the hook of the song, and has been in my head since the album’s release.

Usually, I am not drawn to rap and hip hop – I find myself turned off and somewhat offended by the often misogynistic and aggressive lyrics. Women have always been involved with rap and hip hop, but it’s fantastic that more women are exploring this genre in 2019. Lizzo believes that this is due to the music industry now being controlled by the public rather than a handful of gatekeepers. “Women who rap have been around for ever! But we never gave them the platform, because the industry controlled who made it through. The industry doesn’t control that any more. The people do.”

Her collaboration with Missy Elliott on the track ‘Tempo’ sparked an Instagram contest whereby Lizzo invited fans to send in videos of themselves dancing which she would then post on her channel. Again, this has promoted a sense of body positivity and inclusivity.

The world needs Lizzo right now. Her wit, shrewdness and positivity are compelling and irresistible. It’s easy to say that she is the next Beyonce because there are so few highly visible women role models in hip hop. Let’s hope that changes soon.

Image of Lizzo courtesy of Atlantic Records. The image is the album sleeve for Cuz I Love You. It is a naked portrait of Lizzo. She is sitting on the floor, the image is taken sideways on and she is looking towards the camera