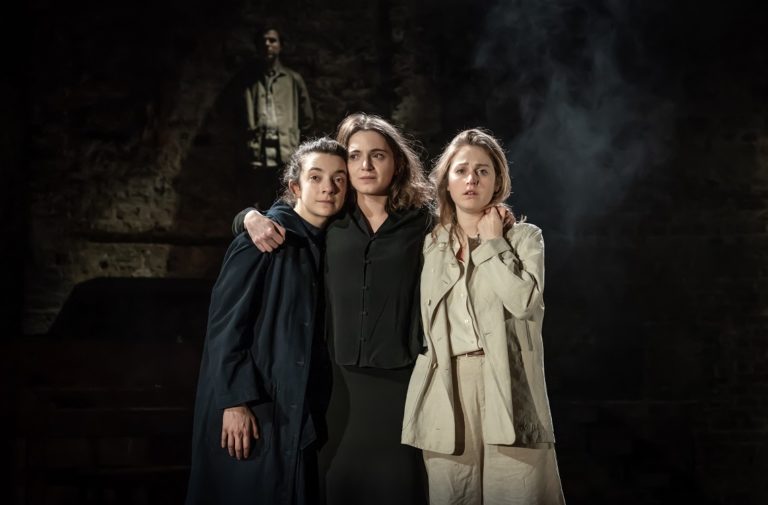 “I remember there were three of you”

When I’m thinking about feminist texts, a play written by a white Russian man who has been dead for 114 years isn’t the first thing that springs to my mind. However, in the Almeida Theatre’s production of Chekhov’s Three Sisters, Rebecca Frecknall’s direction of Cordelia Lynn’s adaptation blows the cobwebs off this Russian classic and reveals something new about how theatre could approach women’s relationships.

The plot is perfectly simple: three sisters, Olga (Patsy Ferran), Masha (Pearl Chanda) and Irina (Ria Zmitrowicz) dream of the day they can return to their beloved Moscow where they grew up. But as the years go by, and life begins to “choke” them as Irina puts it, the sisters slowly realise that the return to the city, and the happiness of the childhood they once had, is a fading promise at best.

The most exciting thing about the piece is that in the middle of all the allegorical symbolism about the rise of the working class in comparison with the ageing aristocracy, there is a detailed exploration of the female experience. The writing, casting and performances show every woman portrayed on stage as being very different, and it seems that every stage of life is crammed into the almost three hours of the play.

The play opens on Irina’s 20th birthday, the same age as me, and Zmitrowicz’s Irina reminds me so much of myself and many of the women I spend time with. The balance the play achieves between the different lives women seek is perfect. On the one hand there is a doting mother, Natasha played by Lois Chimimba, and one of the sisters, Olga, wishing for a traditional life staying at home looked after by a husband. On the flip side you have the younger sisters: Masha who is struggling to come to terms with the fact that she married the wrong man, and Irina who rejects every man who offers himself and instead dreams of going to work and making her society a better place.

But this is not a feminist utopia. The sisters’ powerlessness due to being orphaned is a theme that threads throughout the play. Olga’s dreams of marriage come from a sheer desire to survive rather than dreams of love and happiness. Watching Masha’s desperately unhappy state as the wife of Fyoder Ilyrich Kulygin (played by Elliot Levey) is particularly heartbreaking, not because he is abusive or vile in any way – quite the opposite – he is charming and understanding, but Masha does not love him. The way the play just allows women to be unhappy in their lives without having to justify it with stories of abuse and overt hardship is a refreshing choice from Frecknall and Lynn. Though the sisters themselves are close, the fighting between them and their brother’s partner Natasha to be in control of the home is especially hard to watch. The argument about firing the elderly servant Anfisa (played by Annie Firbank) truly highlights the impact the lack of real power has on these women; they are willing to tear others down just to taste a morsel of it. Even the young Irina, who at the start of the play is on the cusp of womanhood, is subsequently reduced to an exploited worker and, with a little push from her eldest sister, decides not to wait for love and instead attempts to marry a rich baron.

The sister’s vulnerability is further shown by the weak and frankly useless male characters. In scene upon scene, the women are let down by the men who swear to protect them.

At one point later in the play, the town is burning to the ground and people are rushing to the mansion for Olga’s aid. Meanwhile the doctor, played by Alan Williams, has deliberately got himself so drunk that he wanders around debating Shakespeare with himself. The unhappy Masha is swept off her feet by the illusive but married Alexander Ignatevich Vershinin (played by Peter McDonald). However he later leaves for Poland, abandoning her sobbing inconsolably in the dirt. After Irina rejects his aggressive sexual advances, Vasily (played by Alexander Eliot) vows to kill the man who ends up marrying her as punishment. He succeeds at this by shooting and killing Baron Nikolay as the two men squabble over rights to her body.

The most frustrating failure, however, comes from their brother Andrey (played by Freddie Meredith). Simply for being a man, he is afforded the best education with the promise that he will take his sisters back to Moscow and live out his life as a professor. Instead he gambles their house away and allows his wife to subject them to abuse, while he locks himself away in his study. With his sisters’ fight against life and struggle right in front of him, Andrey just gives up, refusing to acknowledge the power he has to change all of their lives.

As a theatre lover, I would do anything to have more shows dedicated to the magic that is women’s friendship and its ability to support us and see us through the most terrible times

Amid all the bleakness and tragedy, one thing the sisters have throughout the play is each other. Physically and mentally, the sisters are close. It’s almost as if there is a magnetic pull between them; as soon as one sister is on stage before us, the other two are pulled with her. Neither Irina nor Olga judge Masha as she confesses her love for Alexander. Masha and Olga in turn do not tease Irina for her blatantly deluded pipe dreams. Instead, the sisters work together and face off whatever challenges come to them. The closing moment of them huddled around the grieving Irina, swearing to each other that they will survive, gives a sense of hope in what initially seems like a storm of tragedy and pain.

Although this portrayal of three sisters being close and loving is something to be celebrated, it is problematic that I find it to be an unusual occurrence. Too often the only time women are on stage together is to fight. In King Lear, instead of uniting against an abusive patriarch, two sisters gang up on the other, before turning on each other, and all that is left of the family is a pile of bodies on the floor. The entire plots of musicals Heathers and Mean Girls centre around young women desperate to tear each other down – which with their young fanbases unnerves me slightly.

As a theatre lover, I would do anything to have more shows dedicated to the magic that is women’s friendship and its ability to support us and see us through the most terrible times. Without ‘sisterhood’, in whatever form, these three fictional sisters and countless real women would have crumpled under the pressures of life, and I for one believe theatre should honour this more, as is so brilliantly done here.

Three Sisters played at the Almeida Theatre from 6 April until 1 June 2019.

Both images are by Marc Brenner.

The feature image shows Patsy Ferran as Olga, Pearl Chanda as Masha and Ria Zmitrowicz as Irina. The three sisters stand with their arms around each other looking forward, with different expressions on their faces. They look hopeful, worried and sad. They wear sombre clothes and the stage is dark behind them.

The image in the text is of Patsy Ferran as Olga and Annie Firbank as Anfisa. The older Anfisa sits in a chair, with Olga bending down towards her. They both look towards the left side of the picture and seem worried. The wall of the theatre, starkly lit, can be seen behind them and to the right of the image is a bowl and jug.