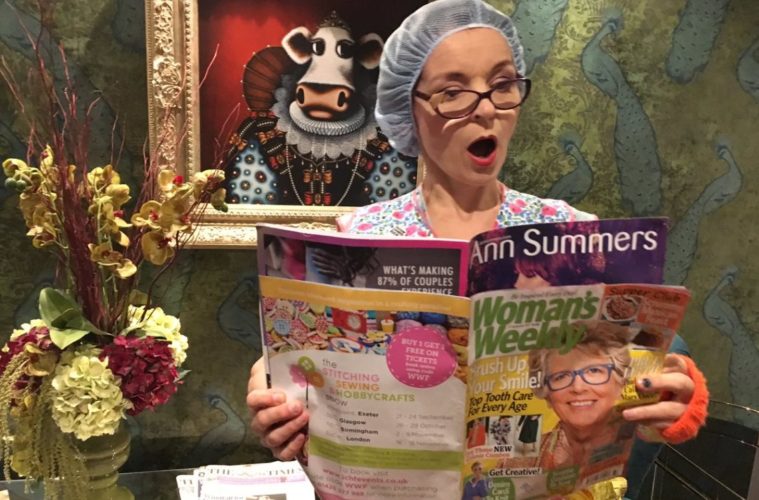 It’s a short and sweet one this month from me as I’m just about to hop on the train to Glastonbury.

Fall Prettier from Wet Paint opens at The Space in east London tonight and runs until 30 June. “A wacky, brutal and glitter-dusted take on appropriation of women’s narratives, through a looking glass of the Medea myth”

Soapbox Racer, a new play about love, loss and connecting with your inner daredevil, aims to challenge the idea that STEM subjects are ‘just for boys’. It’s at The Local Theatre in Sheffield from 3 until 6 July and then Underground at The Arts Centre as part of Buxton Fringe on 15, 17 and 18 July.

SWIM is at HOME in Manchester from 9 until 13 July. It’s described as “a unique, funny and moving account of one woman’s journey through grief, and how she turns to open water swimming to help her cope.”

Lovers Anonymous from the Encompass Theatre Collective is on at The Space in east London from 9 until 11 and then 16 until 19 July. They describe the show as: “a unique, interactive event exploring taboo aspects of love and relationships” and say that it questions gendered, ‘traditional’ views on love and relationships.

The 2019 CASA Festival – London’s largest celebration of Latin American arts – will take place from 16 until 27 July across a number of East London venues. look out for Ladylike which takes a fierce, frank and funny look at the potential and limitations of gender roles and Butch Princesa, where character comedy, dance and Latin beats guide you deep into a surreal, queer, immigrant wonderland.

The We Are Wac Arts (WAWA) Weekender festival will be held from 26 until 28 July. The charity, based at Hampstead’s Old Town Hall, is celebrating its 40th anniversary. There will be discussions, workshops, performances and parties including professional development workshops from Woman SRSLY and a Dance For All session with Para Dance UK.

If you’re going to be in Edinburgh for the Edinburgh Festival Fringe and would like to review for The F-Word, please drop me a line at [email protected] (or [email protected] – it all comes to me!) Similarly those email addresses are the ones to contact me on if you’d like to ask for your show to be covered.

NextUp, the a streaming service for standup comedy, will also be in Edinburgh, focusing on finding and filming new talent for the platform. For comedians who’d like to be considered for filming there’s a simple web-form to fill in. They also have the Grapevine Bursary to help increase diversity on the platform if you’re interested in setting up your own filming.

The feature image is courtesy of Shangri La! and shows Kath Morgan-Thompson as Mrs No Overall. She is reading an Ann Summers magazine badly hidden by a copy of Woman’s Weekly and has a shocked expression on her face. She wears a hairnet, horn-rimmed spectacles and a flowered tabard can just be seen on her shoulders. Behind her on the wall is a painting of a cow dressed in Elizabethan costume.