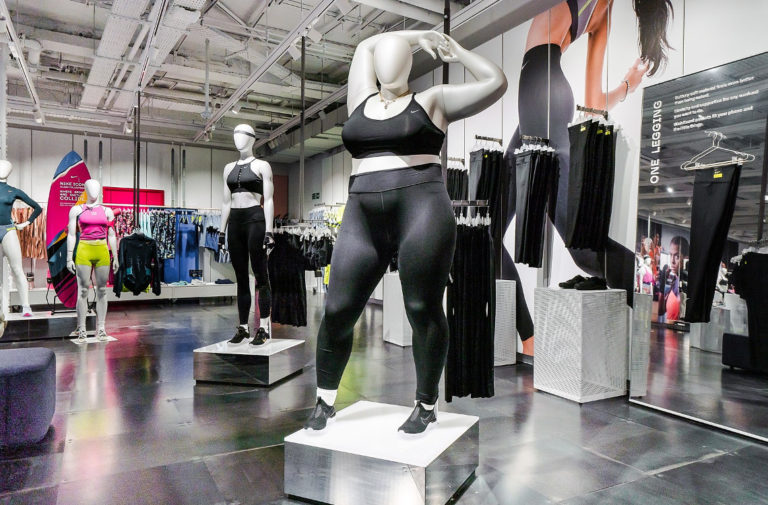 Women’s bodies are not aspirational objects

[the mannequin] is, in every measure, obese, and she is not readying herself for a run in her shiny Nike gear. She cannot run. She is, more likely, pre-diabetic and on her way to a hip replacement. What terrible cynicism is this on the part of Nike?

Many women quickly responded with the fact that they are as fat or fatter than that mannequin and quite capable of running. You simply cannot judge a person’s health or fitness by their size. But this is slightly besides the point.

People who cannot run or take part in other forms of exercise – including people who need hip replacements – are entitled to make clothing choices and see themselves represented wearing nice clothes. Being disabled is no more a vice than being fat. Sportswear is both comfortable and fashionable and half of sportswear purchases have nothing to do with sport. I own jogging trousers, despite having lost the capacity to jog back in 1996.

The problem with most mannequins is that they are very similar and yet very different from the bodies of most women. A typical mannequin is six foot tall – eight inches taller than the average woman. She is very thin with narrow hips and shoulders, a concave stomach and breasts that sit upright as if supported by an invisible bra. She is almost always standing on tip-toes. She doesn’t often have a natural skin-tone these days, but when she did she was paler than most people.

Women with the figure of a mannequin exist, but they are uncommon. Even things like the size of a mannequin’s head is very unusual for a woman of such height; most very tall women have larger than average skulls, while a mannequin typically has room to spare in a standard lady’s hat.

Not only does this undermine part of the function of mannequins – that is, to show how clothes might fit on a potential shopper’s body more effectively than a coat-hanger – but the complete absence of any other kind of body suggests that there is only one type of woman’s body that can look good in clothes (or indeed, at all), a suggestion reinforced throughout our culture.

This is why a photograph of a mannequin in a wheelchair in the window of a bridal shop can move a disabled woman to tears; it is so unusual to see one of us depicted as a beautiful and romantic figure, even when she has no face. Last month, teacher, activist and fashion magazine editor Sinéad Burke, who has dwarfism, described her experience of having mannequins made in her image as part of the broader Body Beautiful: Diversity on the Catwalk exhibition at the National Museum of Scotland.

Women’s bodies are no more aspirational objects for other women than they are sex objects for the benefit of men. Most people cannot drastically change the size or shape of their bodies in any case. If suppressing positive images of fat bodies helped fat people to lose weight, there would be no fat people anywhere. Gold herself argues that the Fat Acceptance movement may “kill [women], and that is rather worse than feeling sad”, only to later suggest that the over-eating she imagines fat people do is a “response to sadness”. There’s just no way to win that game.

Instead, we need to see both human fashion models and shop mannequins representing fat women, older women, trans women, short women, women of colour and disabled women, not just so that more women can see themselves represented, but so that all of us can see that there are many and various ways to be a woman. All of us deserve to be seen and to take up space. All of us can choose to dress stylishly or comfortably and hopefully both at once. All of us, I think, can be beautiful.

[The image is a photograph of the plus-size mannequin in Nike’s Oxford Street store. Inside a clothing store stands a silver mannequin wearing a black and grey crop-top and leggings. She has no hair or facial features and she is posed with her hands together as if stretching the muscles of her upper body. The model has thick thighs and carries some weight on her stomach.

The photograph belongs to Nike and used here under fair-dealing, as the image is being discussed and critcised.]