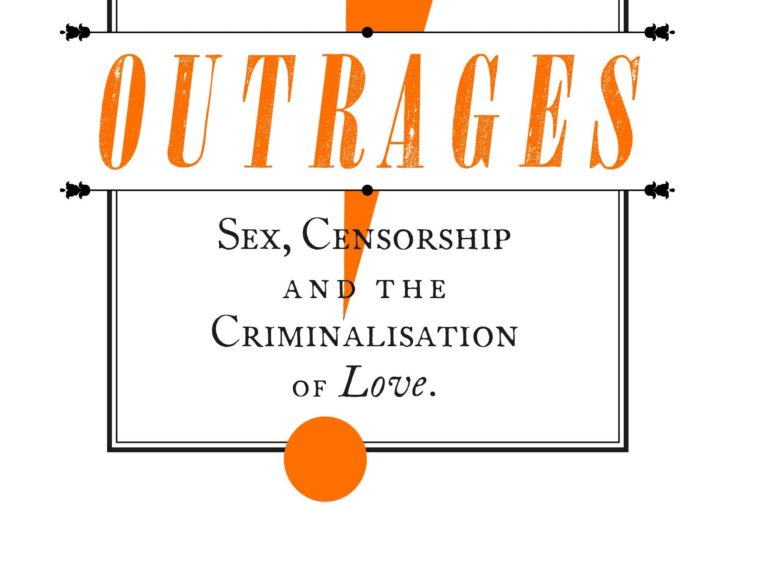 One in five LGBTQIA+ people in the UK have experienced hate crime because of their sexual orientation and/or gender identity in the last year, according to Stonewall’s latest research. Despite this, the UK is still, on the face of it, one of the best countries to live in as a LGBTQIA+ person. Across the world, queer people face strong stigmatisation. ILGA reports that there are currently 70 countries that criminalise same-sex relationships, which is often translated into imprisonment or death sentences.

Outrages by Naomi Wolf is a compelling book about the story, politics, attitudes and beliefs behind modern homophobia at a timely moment when being LGBTQIA+ still sparks ‘outrages’ and condemnation worldwide. Despite the fact that many LGBTQIA+ people continue to experience oppression in many different ways, Wolf’s research focuses on sexual and romantic relationships between men.

The intersection between homosexuality and literature in Victorian Britain is the main topic covered in Outrages. This subject is investigated in eight parts that explore in detail how the state got to police the private affairs of men who loved men, and any literature that was considered ‘homoerotic’.

Wolf’s work rests on a post-structural examination that unpicks underlying foundations for modern homophobia. She details many factors that might have contributed to the creation of the new ‘ethical framework’ on love and freedom of speech that culminated in 1875, such as early first-wave feminists demanding more rights including divorce, contraband pornography from France, increased literacy among the working class and the cholera outbreak. Outrages shows how language shaped reality through the development of social definitions for terms such as ‘filth’, ‘obscenity’ and ‘normalcy’. These definitions were strongly influenced by Victorian culture, public opinion, legislation and efforts to ensure straight men’s privileges.

This persecution achieved its turning point in 1857 with the issuing of the Obscene Publications Act, which resulted in ‘sodomy’ and gay love becoming serious crimes punishable with death

Politics crept into personal issues through escalated oppression against gay men, feminists and anyone else who challenged the system. This persecution achieved its turning point in 1857 with the issuing of the Obscene Publications Act, which resulted in ‘sodomy’ and gay love becoming serious crimes punishable with death.

Before that, Wolf argues, being gay was not even a concept and hence, no legal action could be taken against it. Sodomy, however, was indeed outlawed since the sixteenth century even though, according to Wolf, it was “rarely prosecuted in Britain”. In fact, she maintains that “it was socially normative in the 1850s for a man to sleep every night in the same bed with another man”. But through the introduction of legal terms such as ‘deviancy’ or ‘normalcy’, the law shaped people’s minds and consolidated public outrages against both relationships and sex between men.

After the Obscene Publications Act, writers, editors and printers became the gatekeepers of the state’s new ‘morality’ laws, and also the victims of this pervasive surveillance over the written word and love between men. But gay poets and other artists wittily, though not always successfully, found ways to write about male beauty, love, sex and friendship.

Wolf walks the reader through the life, love and literature of English poet John Addington Symonds (1840-1893), who argued through his hieroglyphic poems that relationships between men should be regarded as natural rather than as ‘abnormal’. Symonds’ revolutionary writing and his relationships with men serve as objects of inspiration and continuity for Wolf’s larger story. The young Englishman found a source of influence and comfort in American poet Walt Whitman and his pre-censorship work, where he openly celebrated diversity of love and sexual relationships, as demonstrated in his poem ‘Leaves of Grass’:

Through me forbidden voices
Voices of sexes and lusts … voices veiled, and I remove the veil.
Voices indecent by me clarified and transfigured …
I do not press my finger across my mouth …
Copulation is no more rank to me than death.

Oscar Wilde, the Rossettis and Walter Pater joined the cast of pioneers and tormented artists who used literature to defend gay rights.

After the publication of Outrages, Naomi Wolf was challenged by historian Dr Matthew Sweet in an interview on BBC Radio 3. The host of Free Thinking uncovered a couple of mistakes in the book regarding Wolf’s claims that, after 1857, there were “several dozen” executions of men for sodomy in the UK in the Old Bailey proceedings. Sweet suggested that Wolf might have misinterpreted the term “death recorded” during her research and that the last hanging for gay sex in Britain occurred in 1835. During the interview, Wolf gracefully accepted the corrections and ensured a prompt modification of future publications. She later argued that the book is not meant to be a “social investigation” but a “cultural analysis of a mood”. Indeed, while unfortunate, the error does not detract from the fact that gay men were persecuted in Victorian Britain.

With Outrages, which is based on Wolf’s PhD research at Oxford University, she has proved once more that she is willing to keep tackling big issues and campaigning for human rights

Wolf has rightfully earned her reputation as a smart feminist campaigner through her bibliography of controversial publications like The Beauty Myth, with which she first made her name in 1990. With Outrages,which is based on Wolf’s PhD research at Oxford University, she has proved once more that she is willing to keep tackling big issues and campaigning for human rights.

Outrages is a wonderful piece of historical and literary investigation. Wolf’s style is engaging and easy to read, considering the book is an adaptation of her previous academic work. But most importantly, it’s a valuable piece that exposes the foundations for the outrages that still exist today when it comes to gay love.

Outrages by Naomi Wolf is published by Virago and is available to purchase as an eBook, in paperback and in audio.

The image used is the cover of the book in the review. The design is a bright orange exclamation mark with the author’s name (Naomi Wolf), the title of the book (Outrages) and the subtitle appearing on top of this motif. The subtitle is: Sex, Censorship and the Criminalisation of Love. The cover has a white background and there is a black double-lined border running around the text on the design.