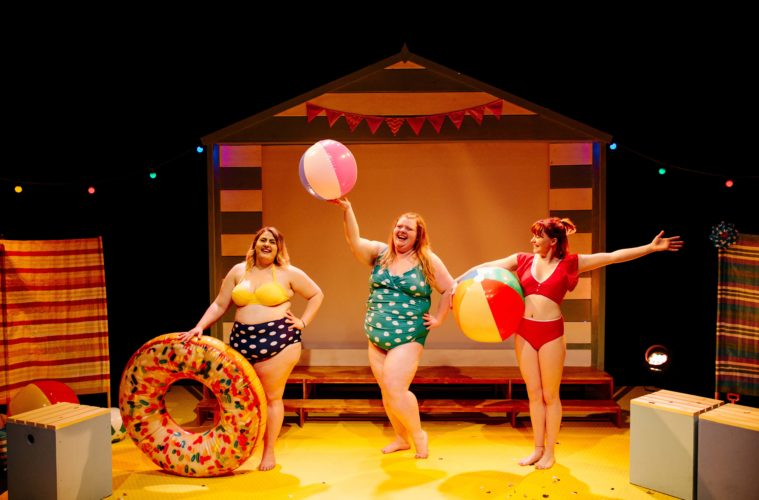 The F-Word’s sixth set of reviews from the Edinburgh Festival Fringe covering theatre, musicals and opera, and cabaret and variety

Theatre company, The Roaring Girls – Rachael Abbey, Josie Morley and Sarah Penney – have a couple of things in common: bitter experiences on the beach and a body they don’t love. Beach Body Ready is their story. It’s not one where three girls build an easy, ‘healthy’ relationship with food and exercise, successfully losing many stones that they never gain back and ultimately finding love because they have ‘sculpted’ a body they like. It’s a story where the three of them speak frankly about their experiences.

The performers announce that it will be a relaxed performance and keep it light by injecting their body-image talk with humour. The conversation touches on the sometimes-arduous journey to embracing one’s own body, learning to find the words to speak about it and realising that every path towards self-love is unique. While the content itself is not new, Beach Body Ready has witty takes and wry observations, such as noting that everyone seems to have an opinion that must be listened to about fat bodies, apart from their owners. There are stories about mothers, make-up, food, clothes, sex, love and exercise – written so sharply that they cut through the skin, but so intelligently that I do not note it all until much later.

The Roaring Girls acknowledge that the show will not do much more than register another protest against the patriarchy. But the looks on the audience’s faces as they walk out of the show tells a different story – at the least, the next time someone is asked if they’re getting “beach body ready” they might not think that implies a size. Bait: Kill the Princess (Cabaret and Variety)
Until 25 August, 15:40, Heroes @ The SpiegelYurt
Reviewed by Archanaa Seker

It’s not really ‘killing’ because it’s all done through clowning. Bait Theatre’s Kill the Princess has Lizzy Shakespeare and Michelle Madsen subvert many princess stereotypes through their engaging clowning performance; they ask if the princess ever really needed a saviour or an ivory tower while dissecting fairies and taking on high mountains and rough seas. The chemistry shared by Shakespeare and Madsen on stage is excellent and this truly is the golden goose of the show.

Kill the Princess is spontaneous and seriously funny, playful and provocative. It uses the art to create a dialogue and draws from fairy tales to ask these questions: if the princess – who has only existed to be punished, oppressed, or married to a generic prince – ceases to live, what kind of stories about women will come alive? Can killing the princess give birth to tales of inspiring and un-ladylike women? Does society’s behaviour differ if we are told that princesses can save themselves?

This is a show for everyone, but especially for those who would like to see, not only the end of the patriarchy, but also the rise of new ideas and to find answers together. A dangerous inmate has escaped and three best friends are having a totally 1990s sleepover – what could go wrong? Scream Phone takes the pastiches of US teen movies and slasher films and merges them together in a camp delight that leaves me tingling.

The use of famous pop songs with new lyrics sets the scene for the movie-style teenage drama, and the nod towards their clever re-purposing of those songs to get around any copyright issues is a lovely fourth wall break. The three characters are the right level of over-the-top stereotypes to allow them to play into the tropes and then subvert them: the popular bully, the smart suck-up and the ditzy ‘slut’ are all used to gently explore these problematic tropes while maintaining the pace and humour of the show.

There are moments that genuinely make me jump and tense up, which considering the bubbly kitsch of the rest of it, are cleverly done. What starts off as typical rivalry with hilarious heavy-handed foreshadowing slowly devolves more and more into horror, without ever losing its light touch. The twist at the end is signalled but not obvious, and while it’s not a great portrayal of issues around mental health, Scream Phone has laid the ground work so that it works as another poke at horror films rather than anything more cringy. The show keeps me laughing and bopping along and, for something with such a focus on murder, it leaves me feeling like I’ve had a great time. A play in five part(ie)s is an interesting concept but has the potential to grow quite repetitive, especially as a one-woman show. However, Gobby manages to never become boring and achieves an incredible, realistic and satisfying story arc that leaves me emotional and satisfied.

With Bri starting out as an awkward but desperate-to-make-friends character, her story begins at her own party, where we see her trying to platonically court her own friends and failing. We then abruptly find out from Bri that her ex-boyfriend has used the threat of suicide to control her. Through the next four parties, we go on a personal journey with Bri that takes us through the highs and lows of recovery, self-realisation and acceptance.

From her inability to let go of her friends who dropped her and weren’t there when she needed them (“the wolves”) and her anger at their apparent betrayal, to her deep conversations over hummus, I am entranced by the unflinching portrayal of Bri. She is at turns uncomfortable, angry, lonely, loud and happy – in short a fully fleshed out character. The show’s exploration of victimhood and blame is on the nail, and while it doesn’t always make for comfortable viewing, it is deeply satisfying to see Bri go from feeling like she is too little, to too much and then, finally, to realising that she is just enough. Me and My Doll (Theatre)
Until 26 August, 12:15, Gilded Balloon Patter Hoose
Reviewed by Emily Zinkin

As a thank you for throwing a work colleague’s stag do and acting as best man, Kate is gifted with a blow-up doll. Labelled unlovable by her men colleagues, Kate is then thrust into rom-com scenario after rom-com scenario when the doll comes alive and takes an unhealthy interest in romantic movies.

Me and My Doll is a fascinating exploration of how escapism is not necessarily something we might wish to happen in reality, while also taking a comedic but dark look at how those tropes can actually be quite toxic. Both Kate and Doll are portrayed in wonderfully complex ways: Kate hates her job but participates in laddish communication styles; she doesn’t want to be soft but she doesn’t want to be alone, and she both wants and resents vulnerability. Doll’s physicality is comedic and creepy, never letting the audience forget he isn’t human, and his innocence and wonder are tempered by his infringement on Kate’s life.

The ending avoids all rom-com pitfalls and, while it isn’t necessarily happy, it is realistic. Manipulative behaviour and non-altruistic motivations are called out and addressed and, although no one is rescued from their fate, they are also given agency. It leaves me realising why we love escapist stories, but also glad to have been given some tough questions about how we define love and the difference between a loving and a healthy relationship. Daughterhood is a heartbreaking play about two sisters with a long-term ill father. One has stayed at home to look after him, while the other has gone away to university and then work. The story is told through a series of scenes that move through time; the gaps are shown by the performers though simple but effective physical movement – like watching a video being wound backwards and forwards.

The cast of three are terrifically good. As the younger ‘prodigal’ daughter, Charlotte O’Leary is cheerful but also a touch annoying. As the older sister, Charlotte Bate seems to ooze resentment and disappointment though every pore. Toyin Omari-Kinch plays a multitude of people throughout the story: ex-boyfriends, the father, a university tutor are just a few. He delineates each character perfectly, never having to fall back on stereotypes to make each clear.

Charley Miles’ script packs a lot into the fast-paced hour. Each scene tells exactly as much of the plot as it needs to and never outstays its welcome. I feel as if I’m holding my breath as the story reaches its conclusion and the audience finally discovers how all the miscommunication and unhappiness has come about. Daughterhood deserves its big audiences at the ROUNDABOUT and can be seen later in the year on tour.

Image 1, the feature image, is from Beach Body Ready by The Roaring Girls and is by Tom Arran. It shows the three performers standing on stage wearing swimming costumes. They each hold an inflatable (two beach balls, one ring) and look very happy. The set is dressed to look like a beach: the stage is yellow, there are windbreaks either side of the stage and a structure similar to a beach hut behind them.

Image 2 is from Kill the Princess and is by Tristan Fennel. It shows the two performers from the waist up facing each other. They both wear swimming googles and sleeveless tops. There is an arc of water between them in the moment that it is spat from the mouth of the performer on the left into the face of the performer on the right. They are holding a piece of blue waterproof material between them.

Image 3 is from Scream Phone. It shows the three performers lying on a bed in sleepwear (so looks very like a stock image of a sleepover). The middle one holds a big pink telephone up to her ears. They all look comically terrified. The colours of the image in general are pinks are blues.

Image 4 is from Gobby by Jodie Irvine. It shows the performer from the waist up standing on stage. She has her eyes closed and looks serene. She’s wearing a dark green top. Behind her in the darkness of the stage are two bunches of balloons and some bunting.

Image 5 is from Me and My Doll. It shows the performer back-to-back with a cheap-looking blow up male doll. She wears a white shirt and black tie and looks towards the camera with a slightly panicked or exasperated expression. The doll also has a black tie on which goes over her shoulder and she’s holding the end of it.

Image 6 is the publicity image from Daughterhood. It shows a black and white photograph slightly off-centre on an orange background. The photograph is of two girls (it’s quite a well-known photograph), the younger one is holding up her middle finger angrily to the camera and the older one is looking happy and shocked with her mouth in a wide open smile behind her.