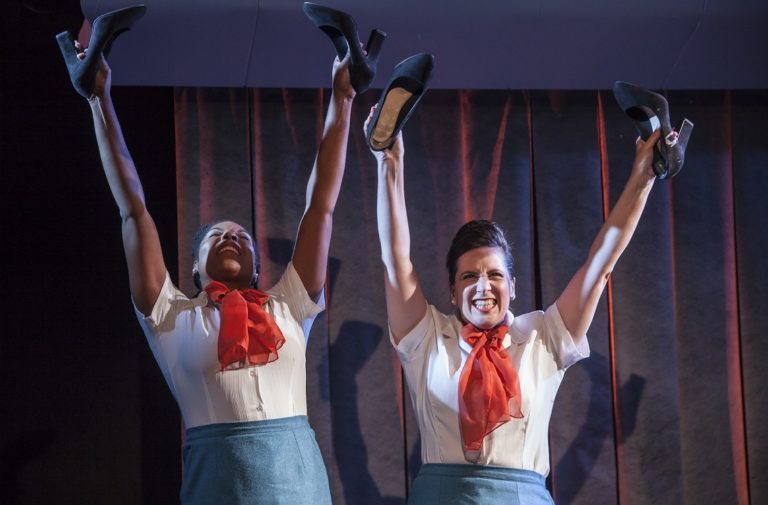 The F-Word is back at the Edinburgh Festival Fringe this year and will be covering a wide range of shows across venues and genres. This first instalment covers theatre. Everything about Sary from Different Theatre has elements of the whimsical, from the tiny little room in the Novotel hotel to watching Sharon Drain and Rebecca Jones go about their daily lives as if an audience was not in the room at all. The plot is simple, yet drips with magic and lore; it’s based on a 19th century Sussex legend. Sary tells the story of the title character through her eventful but traumatic life.

A key part of this production is that as the cast is only two women, every aspect of the show is focused on the female experience. At every point, you can relate to Sary and each of the different experiences she faces, from her first period and the related unwanted male attention, to her utter resilience against a world designed to disadvantage women.

Both Drain and Jones give terrific performances and their on-stage chemistry allows a gentle and moving exploration of what it is like for a woman to get old. Sam Chittenden’s stunning way with words makes me want to climb inside the play and experience the natural wonder for myself. Though the plot sometimes gets lost in the metaphors, overall, Sary is a gem. Enough is a play about two women flight attendants who are friends. They have seemingly quite different lives at the start of the play: one has a husband and children; one is single and in a purely sexual relationship with a man who lives somewhere remote. They work together though and drink heavily in various cities around the world.

Stef Smith’s script is incredibly poetic – it’s full of alliteration and assonance – and often very funny. I’ll admit that I’m not sure I have understood every metaphor and allusion, but there’s a lot here. The play touches on female friendship, what women are expected to be and who they really are, and the ancestral links back to the women that came before us and who are to come in the future – climate catastrophe allowing.

The friendship portrayed by Louise Ludgate and Amanda Wright feels very authentic and Kai Fischer’s design evokes hotel bedrooms, aeroplanes in the air and the earth beneath our feet.

The Ballad of Mulan (Theatre)
Until 23 August, 16:05, Assembly Rooms
Reviewed by Lissy Lovett

A one-person show performed in the first person about a historical figure is a frequent genre at the Fringe and The Ballad of Mulan is a particularly good example. The Ballad of Mulan is about the legendary Chinese figure of Hua Mulan, who disguises herself as a man and joins the army to save her family’s honour. The Grist to the Mill theatre company break up the production’s monologue with sound and video showing Chinese characters and some scenes include battle descriptions including demonstrations of spearwork.

The script leaves me with some questions: if Mulan can’t tell anyone that she’s joined the army, how will anyone know that her family’s honour is preserved? Why don’t 5th century Chinese soldiers carry shields? But Michelle Yim’s performance is assured and engaging, especially considering how hot she must be in the leather armour she’s wearing.

Mulan relates how her father told her that if she can’t tell the difference between a buck or a doe rabbit when she’s hunting, then it doesn’t matter if she’s a boy or a girl. It’s uplifting to hear the story of a woman hero, particularly one who isn’t driven to bravery by mistreatment from men.

The simplicity of the show leaves nowhere to hide either for the audience or for Martin. However, she’s an incredibly charismatic performer who holds my attention throughout How to Be Brave (Theatre)
Until 25 August, 15:45, ROUNDABOUT @ Summerhall
Reviewed by Lissy Lovett

How to Be Brave is an energetic one-woman play written by Siân Owen from the bafflingly-named theatre company Dirty Protest. It’s performed in one of my favourite Edinburgh venues, Paines Plough’s pop-up theatre, the Roundabout, which is in the round and has LED lighting embedded into its ceiling. The Roundabout leaves little room for set, which means that performer Laura Dalgleish has to work to fill the space, which she does with ease.

It’s a very physical show: Dalgleish mimes riding a bicycle, sliding down a mudslide and performs a choreographed disco dance. It’s also very funny. Owen’s writing gives a strong sense of the main character Katie’s home town of Newport and what it’s like to still live among the people you went to school with.

There are no easy answers in this play. We identify with Katie, but she’s troubled and making bad decisions. Her wild dash around Newport is fun, but what is she running away from? How to Be Brave is a very moving show and I shed a tear at the end. Alaska an autobiographical show from US-born but UK-based director, writer and singer, Cheryl Martin. The aesthetic is incredibly pared down and simple – the 18 or so audience members sit in a circle of chairs with Martin, while her only tech is an all-in-one hi-fi on which she plays the occasional song. She gives us playing cards with images she’s drawn to illustrate her words, showing expensive clothes that she’s bought compulsively and the fictional moonbase where she invites us to imagine the show.

It’s a difficult story. She talks about various times in her earlier life and how mental illness has affected her. I am particularly shocked to hear that on the 400th anniversary of her Ivy League college, Martin’s lecturers let her out of her hospital ward for just one day so she could meet the Queen – the implication is of course that they wanted to show off their very clever black student, and it’s hard not to feel some anger about that.

The simplicity of the show leaves nowhere to hide, either for the audience or for Martin. However, she’s an incredibly charismatic performer who holds my attention throughout. More than just an exploration of racial profiling and the events that took place in Ferguson, Missouri in 2014 – when Michael Brown, a young black man, was shot in highly disputed circumstances by a white police officer – Until the Flood takes an unblinkered look at the very human side of racism in modern USA.

In this one-woman play written and performed by Dael Orlandersmith, a series of characters are depicted against a backdrop of memorial flowers and candles, keeping the murder ever-present in the audience’s mind. Each character has been created from interviews that took place after the shooting of Brown, with young, old, black and white women and men included. Orlandersmith is neat in her depiction of each character, and each adds a new angle to ponder on. Even the hateful characters are presented as just another opinion in a sea of complication and tragedy.

While the show itself has a fairly standard structure – there are no unpredictable moments much to speak of – the monologues have been assembled painstakingly well, particularly Reuben, a hairdresser who dismisses any idea of being a ‘victim’ as a black man, and Connie, a teacher who, as a white woman, loses a close friendship with a black colleague for suggesting an even-handed approach for both the victim and the police officer. Overall, this is a smart unflinching look at race relations in the US today.

Image 2 and the feature image is of Amanda Wright and Louise Ludgate in Enough and is by Lara Cappelli. It shows both performers from the waist up in their flight attendant uniforms. They both look ecstatic and hold their block-heeled court shoes high in the air above their heads.

Image 3 is from How To Be Brave and is by Kirsten McTernan. It shows performer Laura Dalgleish looking fiercely just above the camera with both her thumbs pointed back at herself. She wears a grey jumper and the colours of the photo are made blue and reddish in tone from the stage lighting.

Image 4 is the press image from Alaska by Photocad. It’s a tall thin photograph with a border like it’s been printed on paper. It shows a black and white photo of Cheryl Martin looking up at a coloured butterfly above her head. She has dark plaited dreadlocks wound up on her head with one hanging down on her shoulder.

Image 5 is of Dael Orlandersmith in Until the Flood and is by Alex Brenner. It shows Orlandersmith leaning on a chair in the middle of a darkened stage. All around the edge of the floor are heaped up objects similar to those you might find at the site of a murder – candles, signs saying “we all bleed the same”, cuddly toys and so on. Orlandersmith is brightly lit from one side, with her other side in shadow.