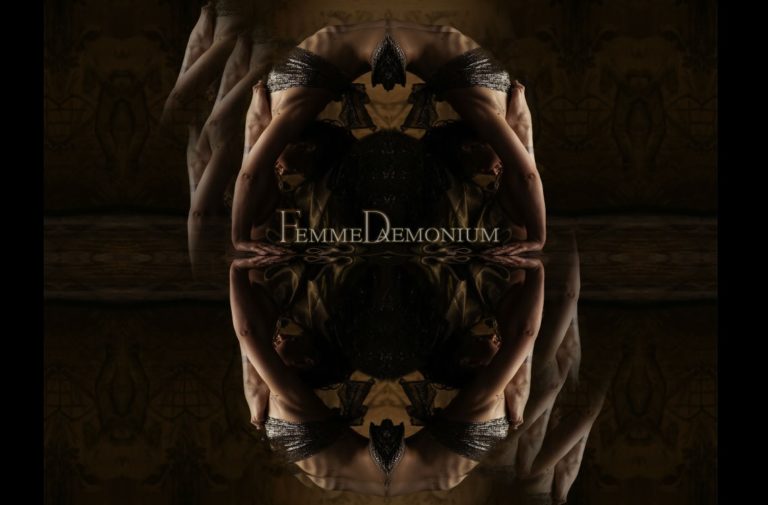 On a rainy Friday night in October I make my way to a secret east London location for Sharper Than A Serpent’s Tooth: The Witching Hour by female-led and sex-positive collective FemmeDaemonium. I gladly hand over my soaking wet raincoat to their friendly door team and make my way upstairs, where a dark event space awaits. The floor is covered with rugs. All manner of decorative clocks, books and stuffed animals are on dark wooden shelves. A chandelier and a row of apples on strings hang above the performance space. And a variety of seating options surround a circle of seven chairs.

I am initially a little unsure what to do with myself. I’m unclear about where I should sit, where the toilets might be and, if I’m honest, although the collective promise that there is a “a choice to be an innocent bystander, or to delve into the black market trade of the Ouroborus Society”, there’s a worry that I’ll be drawn into something I’d rather not. I’d like to say that this feeling dissipates as the evening progresses but unfortunately it doesn’t. I’m really not sure that I experience the evening as intended.

Half an hour after the advertised start time, the first part of the show begins. Performers move around the room blindfolding the audience while the rest of the cast create a soundscape with a drum, other percussion and their voices. The effect is disconcerting, and after a while the performers move on to sing a beautiful version of what I think is John Taverner, which for me is one of the highlights of the evening.

After we’re instructed to take our blindfolds off, seven of the performers become the “Literati”, a group of men wearing drawn-on moustaches, braces and waistcoats, sometimes over a bondage harness. These characters evoke an Oxbridge drinking society or old-fashioned members club. They celebrate the ongoing success of the patriarchy through a script delivered in a declamatory style which, although stylistically effective, I find hard to follow in detail.

Various mythical women, including Medusa, Hekate and Lilith, are then brought into the group. We the audience are invited to spend tokens that we have been given on private experiences with them, and then the cast depart for a break announced as 40 minutes, but actually closer to an hour.

We wanted to create a capitalist microcosm by setting up a brothel environment in which the characters’ time could be physically purchased. We included exclusivity, inflation and corruption of that system

Once again, I am unsure what to do. It’s hard to know how one might go about purchasing a private experience. Of course I could ask someone, but I don’t. It feels as if everyone there apart from me knows what to do and what to expect. One half of the audience are spirited away to a mysterious VIP section. I buy another beer.

Later over email I ask the collective about this aspect of the event and they tell me:

We wanted to create a capitalist microcosm by setting up a brothel environment in which the characters’ time could be physically purchased. We included exclusivity, inflation and corruption of that system. Ultimately, we wanted to showcase an economic infrastructure that would allow the audience members curiosity and intrigue to get the better of them and force them to play into the game.

The hierarchy created within the microcosm was designed to frustrate and excite audience members through the currency we created. In buying a piece of the performers time for a ‘private’ experience, you would have a four minute encounter with the character’s journey and their narrative. To tell you would be to give it away!

Our VIP room was a separate exclusive area for a random group of individuals. Those looking to buy into the membership scheme were unable to do so. A second section of the show develops the ideas of the first part further. The Literati once again celebrate the patriarchy, and each of the individual characters we met before return. Isobel Midnight as Tiresias performs a reverse striptease, starting her segment naked but gradually putting on a man’s suit and tie. Bea as Eve delivers a delightful short piece of spoken word.

At this point, another 40-minute interval is announced and I’m afraid your intrepid reviewer looks at her watch (it is 10:30pm and I’ve had a long week) and decides to go home. I’ll never quite know what happened next. I hope very much the Literati got their comeuppance and the various trapped women were released.

Putting a few questions to the group over email following the show gives me the chance to fill in at least some of the blanks of what was a somewhat haphazard evening. They tell me that they “wanted to share stories [about] different perspectives of what ‘woman’ is and what the term ‘sex work’ means from our own personal narratives” and chose to do that “by looking back into the historical context of gendered sexuality and its expectations”.

In terms of how this show feeds into their wider aims as a group, they explain they “are demonstrating the power of solidarity through expression and art. By harnessing our collective voice, we provide education on what it means to survive in a modern day capitalist society, and what that looks like when one chooses, or is forced into surviving on [one’s] time and [one’s] physical autonomy”.

These are excellent aims. 20% of their profits from the evening went to National Ugly Mugs who provide greater access to justice and protection for sex workers who are often targeted by dangerous offenders but are frequently unwilling to report incidents to the police. As they tell me: “There is so much good work being done within our communities and the fight for equal rights, but we also recognise a need for our voice to be heard in a different platform.”

FemmeDaemonium hope to tour the show if they can find the funding. With a little bit more rehearsal and some more pro-active audience ushering, or indeed a slightly less tentative audience member, this could well be an experience to change minds and move a conversation forward.

You can find out more about the collective, including the show and their plans to publish an art-focused zine early next year on their website.

The feature image is the publicity image for FemmeDaemonium, designed by studiodonshades. It shows a reflected image of the top half of a figure, who looks like they are doing an acrobatic ‘bridge’ – their arms and torso are reflected twice so the whole makes an oval shape. There are feet by the model’s head, which could well be the model’s own, but it’s hard to tell with the image reflected as it is. The whole is reflected more in a wider oval. We can see pale flesh, dark luxurious fabrics and shimmer which gives a mysterious impression. The word “FemmeDaemonium” is written in pale letters across the middle.

The image in the text is from the performance and is by Rachel Hardwick. It shows a naked and tattooed performer with ropes tied all around their body, chewing their fingers speculatively. They stand on the rugged floor of the performance space, with houseplants and audience members out of focus behind them.