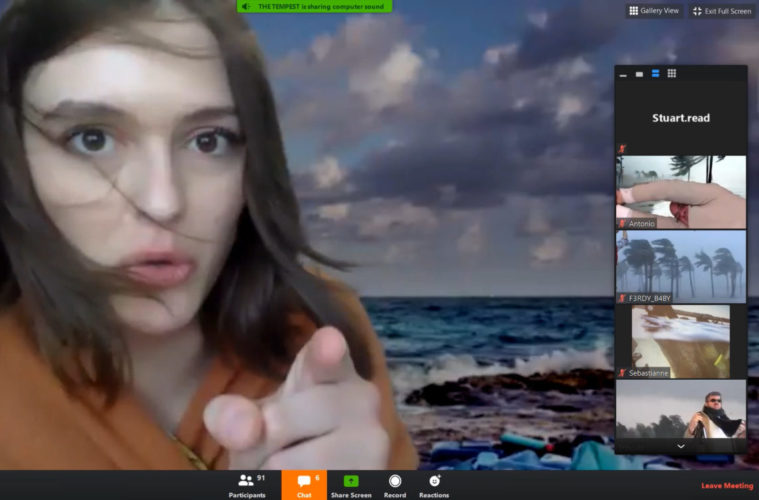 This Zoom call is full of noises, sounds, and sweet airs, that give delight and hurt not

The current coronavirus epidemic has temporarily destroyed the live entertainment industries. Theatre companies are adapting to the situation in many different ways, often broadcasting previously filmed material on YouTube or hosting real-time interaction on Facebook. Creation Theatre and Big Telly have been relatively quick-off-the-mark, putting together a version of Shakespeare’s The Tempest that is broadcast over the meeting programme Zoom.

As I click on the link sent to me on the day of the performance, I see the call fill up with a surprisingly large audience. We’ve been asked to keep our cameras on if we’re happy to, and it’s lovely to see individuals, couples and families all sitting around their computer screens in their own homes. Part of the specialness of live theatre is watching the same thing at the same time with a group of people and a little of that is captured here. After a few moments of producer Lucy Askew explaining what settings we should be on to have the best viewing experience, we begin.

The Tempest lends itself to quite extreme adaptions. There’s something about the idea of it being set on a magical island which means, as an audience member, I’m quite happy to accept a strange location and the interaction between characters being a little ‘off’. Director Zoe Seaton’s adaption runs to just over an hour and adds modern interactions and occasionally a line from a different play entirely to The Tempest’s text.

As the play progresses, each character’s feed is ‘spotlighted’ for their scenes and pre-recorded material is mixed in with the live performance. Designer Ryan Dawson Laight makes full use of Zoom’s green screen functionality for the sets and there’s something very appealing about how the performers’ houses and possessions are used – the actor playing Alonso, Al Barclay, has access to a snake so that makes an appearance too.

What is great about this show is how it has been directed and designed to work on Zoom. It doesn’t feel like an in-real-life production adapted for a different format – it feels native to this setting and as if it could be experienced in no other way

The show works really well when the characters aren’t meant to be in the same places anyway. As Prospero, played by Simon Spencer-Hyde, looks on at the events happening around his island, it’s all completely believable. Spencer-Hyde wears a black polo neck giving him a slight look of Steve Jobs, and a backdrop of old-fashioned TVs behind him show a different character or setting on their screens depending on what’s going on. It’s much harder for Ferdinand (played by Ryan Duncan with the Zoom screen name F3RDY_B4BY) and Miranda (played by Annabelle Terry) to fall in love effectively, and the other scenes where characters really need to be in the same room. This can’t be helped, of course, and the production manages to make light of this with some clever visual gags.

Another consequence of the actors being in different places is that the production has a slightly uneven tone. When actors have all rehearsed and perform in the same place, they often start to act with the same sort of energy and somehow become part of one company of actors telling the same story. I haven’t thought about this before in any detail, but that process can’t happen in the same way virtually. In general in this production, the actors have all gone for a fairly pantomime approach which works very well, but it often seemed that Paul (P.K.) Taylor as Caliban and Terry as Miranda in particular were in different productions to everyone else.

Most of the creatives involved in The Tempest are women, but the production is not particularly ground-breaking in equalities terms. If I had seen it in a theatre or in a park, I wouldn’t necessarily feel compelled to write about it for The F-Word. The cast is made up of six men and three women, and is not very diverse. Terry does her best to give Miranda a bit of gumption, Madeleine MacMahon as a gender-swapped Sebastienne is very funny and Itxaso Moreno is otherworldly as Ariel and connects with the audience well, but I would have liked to have seen it all pushed a bit more.

But what is great about this show is how it has been directed and designed to work on Zoom. It doesn’t feel like an in-real-life production adapted for a different format – it feels native to this setting and as if it could be experienced in no other way. Overall, I enjoy it a lot, and so it seems does the rest of the audience. As well as being a great response to the current situation, it’s also a lot more accessible – those who find it difficult to leave their homes at any time, for any reason, can experience this production.

The Tempest is being repeated from 18 until 25 April at various times to accommodate audiences around the world. You can find out more and book tickets here. A subtitled recording of the performance is available on request.

Both images are screengrabs of the performance from the Zoom app showing the Zoom controls around the edge such as the ‘participants’, ‘chat’ and ‘share screen’ buttons at the bottom. The feature image shows Miranda played by Annabelle Terry pointing at the camera in front of a projection of a stormy shore. The image in the text shows Prospero played by Simon Spencer-Hyde speaking into a microphone in front of a bank of old-fashioned tube televisions. In both images, other characters can be seen in a series of small pictures in a box on the right hand side.