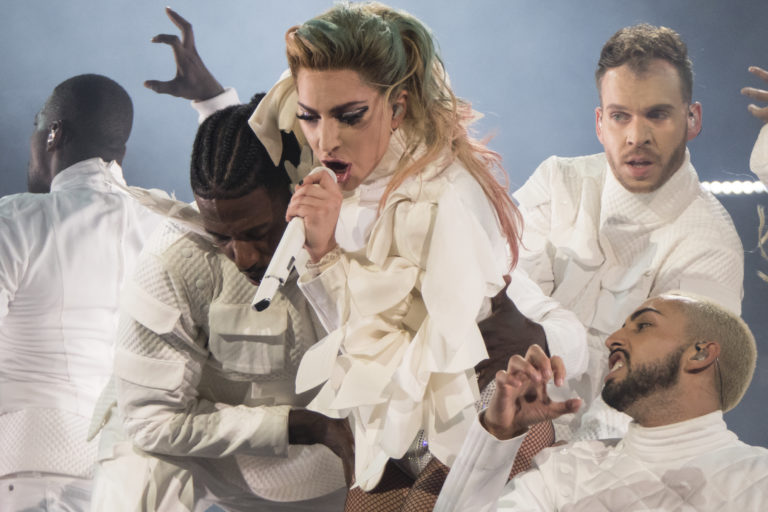 She ate my heart

CN: depiction of a suicide

I was 14 and had started Year 9 in secondary school. By this point, I had inadvertently established myself as an absolute freak. I was lanky, had knotty brown hair that shed dandruff, and a row of Hicksville teeth. I was too smart for my own good and I liked weird US shows. I would’ve said that I was a feminist, but I definitely used to hate other women for not liking the things that I liked.

I loved music but considered myself above contemporary pop. I didn’t want to listen to Susan Boyle or N-Dubz, who were ubiquitous at the time. But secretly I had been listening to Lily Allen and Kate Nash, downloading their singles from Limewire and mixing them into playlists among David Bowie and Green Day. Allen and Nash were wholesome and twee, so I could not see myself in them. I wanted an artist who understood me. So I was primed for that night in September.

I turned on my TV to see a woman in a white bikini and thigh-high boots. She twirled and sang ‘Paparazzi’ to a crowd of entranced celebrities at the Video Music Awards. I watched as Lady Gaga, in a blonde and pink frazzle of hair, stood up from a piano to show us ‘blood’ dripping from her torso. At the end of the performance, she was hoisted into the air, and dangled from the ceiling as a ‘suicide’. Iconic.

In the coming days, this moment was overshadowed by the infamous Kanye West interruption of Taylor Swift. While it was an objectively dramatic moment in pop culture, at the time I didn’t care about the Taylor Swift/Kanye West feud. I cared that Lady Gaga died on stage.

Two months later, I downloaded The Fame Monster from iTunes.

Throughout the album, there are recurring themes of death, self-destruction and monstrosity. Its predecessor, The Fame, has sunnier beats performed with optimism and casual naivety, perfect for the carefree summer of 2008, before the financial crash. Nothing could possibly be wrong when listening to ‘Just Dance’, an infectiously catchy song, even now. But The Fame Monster is darker and far more aggressive.

The opening track, ‘Bad Romance’, is a titan of pop music. In 2009, those blaring moody synths achieved a mix of classic pop structure and intensity that Robyn’s ‘Dancing on my Own’ would perfect a year later. It’s pop music that you could fight to. The next tracks, ‘Alejandro’ and ‘Monster’, double down on this intensity. In ‘Monster’, Gaga sings “That boy is bad/And honestly, he’s a wolf in disguise/But I can’t stop staring in those evil eyes”, which conveys an impending self-destruction. The synths are all-encompassing and bring about the feeling of wandering through a gothic castle, seeing the skeletons of the lovers Gaga has left behind. The following track on the album, ‘Speechless’ offers a moment of vulnerability, stripped down to Gaga’s classical piano training and shimmering guitars. As a sister ballad to ‘Brown Eyes’ from the previous album, it was on heavy rotation on my acoustic guitar when I was 14. It’s a wail of grief and longing; it’s dramatic and painful. Gaga shows us that the heart of the monster is in pain. ‘Telephone’ and ‘So Happy I Could Die’ are two clear club bangers. The heavy synths are back and more aggressive than ever. As inversions of ‘Just Dance’ and ‘LoveGame’, these two songs are blunt and assertive, rather than straightforward fluffy dance tracks. In ‘So Happy I Could Die’ Gaga sings “Be your best friend, yeah, I’ll love you forever/ Up in the clouds, we’ll be higher than ever” which, paired with the uneasy beat, comes across as pleading. Gaga has become her own monster.

After watching Gaga that first time, I went to school the following Monday and asked the people in my class if they had seen her performance. They hadn’t. They didn’t care. I read in the papers and on the internet that some people had misinterpreted the performance as Gaga on her period, or regarded it as further evidence that she had a penis. For me, it was a watershed moment because it was the first time I had seen a woman, figuratively, die for her art. I understood that passion and that lingering feeling of monstrosity.

While I did ultimately get braces, learn to tame my hair and realise that, societally speaking, being tall and skinny is not a problem, I still sometimes feel like that 14-year-old. It took me a long time to find my tribe, but Gaga’s The Fame Monster promised me a life beyond my dead town: beyond the bullies, the abject loneliness and the deep cycles of depression. It promised something bigger while reflecting my own perceived monstrosity back to me. She showed me a life where creativity and artistic intention is celebrated and expansive.

I wouldn’t be who I am without The Fame Monster.