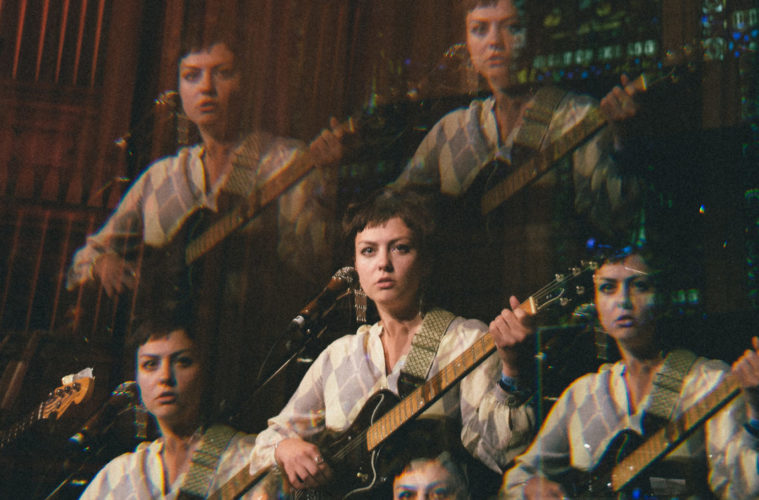 The homemade warmth of Angel Olsen

If you’re a fan of Angel Olsen, you’ll recognise all but two songs on her fifth studio album Whole New Mess. This is because they have been released in her previous album, All Mirrors (2019). However, Whole New Mess offers much more than a new track layout and a stripped-back approach. Through her at times brash but unrelenting vocals, Olsen breathes new life into songs already loved by many. Differing greatly in tone, Whole New Mess is a self-described “purposefully fucked up” record, brimming with emotion and humanity when compared to its overproduced older sister.

Born and raised in St. Louis, Missouri, Olsen moved to Chicago after she graduated from high school. Listening to her new record, it’s hard to believe that folk music was not on her radar in her childhood. While promoting her third studio album, My Woman (2016), she issued a factsheet informing journalists that she’d never listened to folk hero Joni Mitchell. Olsen doesn’t just want to be heard – she wants to be understood.

The title song is the ultimate gateway into the album and self-reflection; it forces you to put your trust in Olsen. Her sombre guitar accompanies her calm anticipation for what’s ahead: “Won’t be long now before it’s really showing/it’s every season where it is I’m going/I stretch my bones out on the floor.” Talking to Pitchfork about the inspiration behind the track last month, Olsen describes her battle with addiction to alcohol and to “coping by leaving all the time and never getting too attached”. In the song, Olsen is ready to embrace staying put.

Olsen’s style can sometimes feel indecipherable, especially when it comes to her lyrics, but she still invites the listener on a journey to experience and embrace their emotions ‘What It Is (What It Is)’ is a track about love that springs from needing a romantic distraction rather than a special connection, where Olsen’s croon is tender and sweet. Whether she is admitting it to herself or others, Olsen realises that “Knowing that you love someone/Doesn’t mean you ever were in love”. Her striking vibrato and the overall control of her voice throughout the song go hand in hand with the themes of love lost and love found recurring on the album.

Similarly, ‘Chance (Forever Love)’ borrows the rich folk feel from ‘What It Is (What It Is)’ and, as opposed to the version on All Mirrors, substitutes the piano for a guitar. The song explores what could be if love was simpler than it is: “All that space in between where we stand/Could be our chance.” Here, Olsen’s unhurried voice hits high and lands at the sweet spot. Regardless, the song that benefits from the bare-boned approach the most is ‘(We Are All Mirrors)’, departing from its predecessor All Mirrors that employs heavy amounts of synth to make its impact.

As Olsen forgoes a full studio production, the album’s rougher, more open-ended parts shine through. In ‘Impasse (Workin’ For The Name)’, Olsen’s voice and guitar first emerge as if in a voice message on the phone. It builds and eventually explodes into a jaded scream: “You know best, don’t you now?” The song is riddled with angst, showcasing Olsen’s ability to transform without abandoning her sense of self.

In ‘(Summer Song)’ Olsen suggests a sense of relief at having survived the summer and the heavy feelings that came with this season. Her subtlety at describing melancholy is sometimes sacrificed to make way for truly heart-wrenching lyrics: “I lost my soul, was just a shell/Just a fragment of myself“.

When asked by The Fader in 2012 how she feels performing such intimate work, Olsen said: “I’m okay with being vulnerable because I think, in that, you’re overcoming something. You’re allowing something to run through you, and I think that’s pretty fun.” Whole New Mess is a manifestation of this, as the record captures your heart with relative ease.

The grandiosity of All Mirrors is replaced with homemade warmth and Olsen wears this look well, harkening back to the rustic feel of her earliest albums

Olsen also makes peace with her fear in this album, turning inward to discover what’s waiting for her next. Whole New Mess, while deeply introverted and meditative, is not self-aggrandising or inaccessible. Olsen’s style can sometimes feel indecipherable, especially when it comes to her lyrics, but she still invites the listener on a journey to experience and embrace their emotions.

In the best song on the album, ‘Waving, Smiling’, Olsen accepts gracefully her predicament: “I’ve made my bed/I’ve laid out all those tears/I’ve made my bed/Made up of all my fears”. But you don’t have to wait long for the optimism to kick in. She continues: “I’m waving, smiling/At love forever, alive and dying/The sun is shining”.

The feelings of nostalgia and melancholia on the album are tinged with the possibility for something newer and better. The grandiosity of All Mirrors is replaced with homemade warmth and Olsen wears this look well, harkening back to the rustic feel of her earliest albums. Whole New Mess is an album designed to be listened to when you’re alone or want to be so; its quiet space is complemented by Olsen’s vocal presence rather than disturbed by it.

If you let it, this album runs through you and into the most intimate parts of your heart, and I think that’s pretty fun.