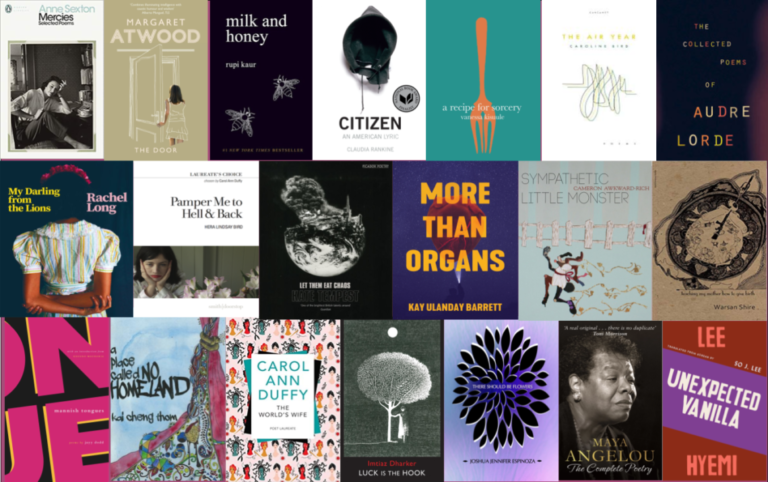 National Poetry Day falls on Thursday 1 October this year. To join in with the spirit of the day, we’ve put together a list of some of The F-Word team’s favourite poetry collections by women, trans men and non-binary writers, from the UK and beyond.

Let us know in the comments what you think of our recommendations, or if there’s a poet you think we should include next year.

A Recipe for Sorcery by Vanessa Kisuule (Burning Eye Books, 2017)

Described as “a recipe book for personhood that changes with the whim of the seasons and the political climate”, this second collection by Bristol-based Kisuule fizzes with energy and life.

My Darling from the Lions by Rachel Long (Picador, 2020)

Shortlisted for the Forward Prize for Best First Collection, Rachel Long takes everyday themes of dating, family life and stories, and infuses them with energy and wit in this wonderful first collection.

Possibly more famous as a memoirist and civil rights activist, Angelou also turned her powerful voice to poetry with thrilling effect. This book collects all her poems together in one volume.

Teaching My Mother How to Give Birth by Warsan Shire (Flipped Eye Publishing, 2011)

Warsan Shire has a brilliant grasp of the sensuality of language. In her first collection, every poem shines with eloquent, simple brilliance.

In this long poem, seven neighbours inhabiting the same London street each take a turn to share a snapshot of their lives. Written for performance, the energy and rhythm of the verse bounces off the page, counterpoint to the disenfranchised voices of Kae Tempest’s characters.

Pamper Me to Hell and Back by Hera Lindsay Bird (Smith | Doorstop Books, 2018)

This pamphlet from New Zealand-based poet Hera Lindsay Bird follows her self-titled debut, filled with poems focusing on love, childish behaviours and being a woman, with 1990s celebrity reference, all written with impressive skill and energy.

More vital and relevant now than ever, Claudia Rankine’s collection addresses the falsehood of ‘post-race’ society through essay, poetry and images.

Shortlisted for the Forward Prize for Best Collection, this is Caroline Bird’s sixth collection. Her poems hide incisive social commentary between lines of wry humour.

At once intimate and expansive, Cameron Awkward-Rich’s debut collection is filled with magic and lyricism, marking him as a bold new voice in LGBT+ poetry.

Powerful and electrifying, Audre Lorde dedicated both her life and her craft to fighting injustice in all its forms. Every poem simmers with feeling.

Anne Sexton is considered the model of the contemporary confessional poet. Her work centred around her own emotions and life experiences, as well as the experience of womanhood in 1950s and 1960s America.

Mannish Tongues plays with the idea of possession and higher powers, and with language itself, in a poetic exploration of race, sexuality and gender that stays with you long after you close the book.

Luck is the Hook by Imtiaz Dharker (Bloodaxe Books, 2018)

Themed around luck, chance, and the nature of transition, this is Imitaz Dharker’s sixth collection.

There Should Be Flowers by Joshua Jennifer Espinoza (Civil Coping Mechanisms, 2016)

A poet of tremendous skill and power, Espinoza’s debut collection is filled with untameable energy and a focus on survival in a twisting world.

With the success of Margaret Atwood’s novels, it’s easy to forget she’s also a highly accomplished short story writer and poet. Every poem in this collection shows that Atwood is a master of her craft.

More Than Organs deals with grief, loss, heartache, not of a single person, but of whole communities. With skill and power, Barrett touches on diverse imagery and cultural references to weave together poems that take your breath away.

Canadian poet Rupi Kaur rose to fame as one of the generation of Instagram poets. In this first collection, Kaur deals with pain, loss, heartache, but ultimately finds the sweetness in each experience.

First published in 1999, this collection takes famous men – from fiction, mythology and real life – and gives voice to the women beside them, from Mrs Darwin to Queen Kong, with sly wit and feminist zeal.

Unexpected Vanilla is Lee Hyemi’s second collection, and takes a surreal, sensual approach to exploring a variety of relationships, attractions and sensations.

The feature image shows the book covers in the order they appear in the list. Clockwise from top left: 1) A white woman leaning on her desk with a cigarette in her hand, 2) An illustration of a woman walking through a door, 3) Two illustrated bees on a black background, 4) An empty black hood on a white background, 5) The shape of an orange fork on a green background, 6) Different coloured lines on a white background, 7) The silhouette of a black woman in a striped dress with her back to us, her arms crossed behind her, 8) A photograph of a white woman with her head in her hands and her face stretched, sat next to some pink flowers, 9) A black and white image of the earth in a billow of smoke, 10) The image of a heart being lit up from beneath by a person holding a torch, 11) A body made of legs running along a white picket fence, 12) An illustration of a woman with lots of children inside her holding guns and syringes, 13) A tree trunk made of patterns and wrapped around with a colourful snake, 14) Illustrations of women’s heads, 15) A black and white illustration of a ghost-person stood beneath a tree, 16) A formation of black petals, 17) A photograph of a black woman against a black background