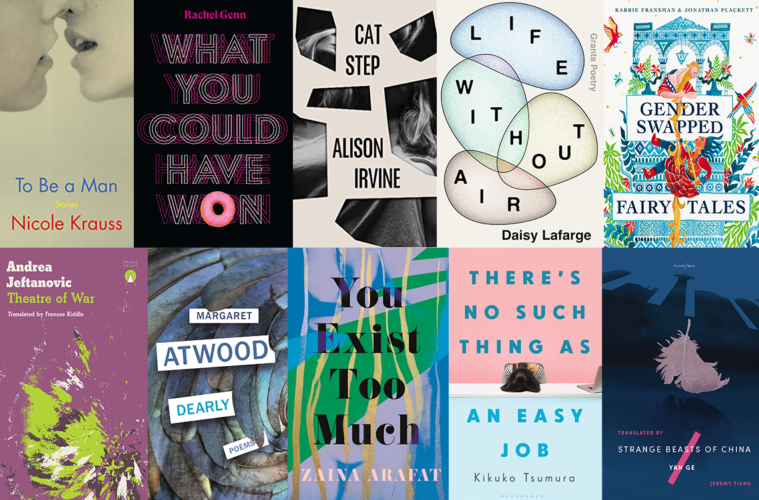 The editors of The F-Word’s fiction section select the best new titles for November.

To Be a Man by Nicole Krauss (3 November, Bloomsbury)

Nicole Krauss’ dark yet beautiful debut short story collection deftly weaves from one end of a woman’s life to another – from birth to death. This energetic collection refuses to adhere to formal conventions, adding to the fractured realness of the characters’ experiences.

What You Could Have Won by Rachel Genn (3 November, And Other Stories)

Set between an apartment in New York, a nudist campsite in Greece and a celebrity rehabilitation facility in Paris, What You Could Have Won is a novel about female resilience in the face of social control.

A single, seemingly harmless, mistake becomes the catalyst for a series of spiralling consequences in Alison Irvine’s novel. Cat Step is a lyrically sparse novel about judgement, intergenerational relationships, community and class, with a particular focus on the expectations society places on mothers.

Visionary, dreamy and capricious, Life Without Air is a hotly-anticipated debut from Daisy Lafarge. This combative collection explores suffocating relationships, toxic environments and ecstatic asphyxiations, bridging the gap between poetry and prose.

This anthology, beautifully illustrated by Karrie Fransman, uses an algorithm to switch the gender roles of fairy tale characters, while leaving almost all of the original language untouched.

Jeftanovic’s novel incorporates elements of theatre to tell a fragmented story of a troubled family who fled the Balkan conflicts for Latin America. The novel is structured in three ‘acts’ and the language sometimes mimics stage direction to create a claustrophobic atmosphere in which the family are characters in a play, seemingly unable to control their own fates.

Before turning her hand to novels, Margaret Atwood was a poet. Her first collection in over a decade, Dearly brings together many of her most recognisable and celebrated themes. A rish, honest and moving account of how it feels to live in current times.

You Exist Too Much by Zaina Arafat (19 November, Dialogue Books)

Arafat’s hugely anticipated novel is told in vignettes that flash between the US and the Middle East. Following a Palestinian-American girl on a journey of self-discovery, living in the margins, as she navigates queerness, love addiction and a series of difficult relationships.

There’s No Such Thing as an Easy Job by Kikuko Tsumura, translated from Japanese by Polly Barton (26 November, Bloomsbury)

A woman pursuing a job which requires very little thought finds herself observing someone for hours on end – Tsumura’s darkly funny book explores the mundanity of the daily grind.

Part detective story, part metaphysical enquiry, Strange Beasts follows an amateur cryptozoologist who is tasked with learning about fabled beasts. While uncovering their stories, she discovers more about herself, addressing existential questions of identity, being, love and morality.

All titles will be available to purchase at your local independent bookshop, order from yours at bookshop.org

The image shows the book covers in the order they appear in the list. Clockwise from top left: 1) two faces about to kiss on a grey background, 2) the title of the book in large pink letters, the final ‘O’ is a doughnut 3) abstract shapes on a cream background, each showing fragments of a black and white photo of a woman 4) the title of the book, letters encased in oval shapes 5) an illustration of rapunzel with the gender roles reversed 6) green and white paint smatterings on a mauve background 7) close-up of blue feathers 8) a grey image of a woman’s body overlaid with green abstract shapes 9) a woman with dark hair wearing a striped top with her head on a desk, next to a silver laptop 10) an illustration of a feather set against the shadow of tall buildings.