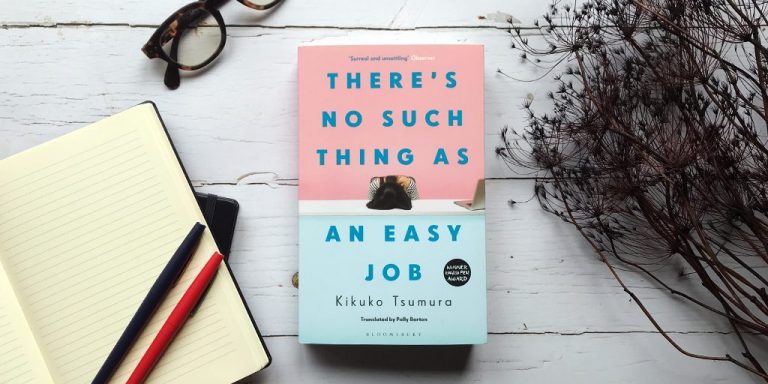 Is there any such thing as an easy job?

Have you ever fantasised about jacking in your career for a simpler life? Such is the premise of There’s No Such Thing as an Easy Job, where a 36-year-old woman, suffering from burnout, quits her long-term job in favour of something less taxing and “as close as possible” to where she lives. Set in Japan, the book follows her quest as she takes on five temporary roles, all a little unusual.

We meet the unnamed protagonist when she’s in the first of these positions, working at a surveillance agency where her target is an author who lives alone, works from home and has somewhat uneventful days, to put it kindly. She moves on to writing and recording adverts promoting local businesses to be played on a tired bus route, producing facts to be printed on the back of rice cracker wrappers, putting up posters displaying public health messages in residents’ windows and helping out in a national park. On the surface, the jobs seem relatively straightforward. However, as the days, or sometimes weeks, pass, it’s clear there is more to them than it first appears.

The same is true of the novel itself and there appears to be a commentary on workplace culture and millennial burnout underpinning each of these slightly quirky escapades. The narrator tells us she left her job “because it sucked up every scrap of energy I had until there was not a shred left, but at the same time, I sensed that hanging around doing nothing forever probably wasn’t the answer either”. It’s a predicament that many – particularly millennials – might empathise with (though quitting steady employment in favour of a stream of readily available temporary jobs and moving in with parents, as this protagonist does, is one option that currently seems impossible, thanks to Covid-19). Anne Helen Petersen’s 2019 Buzzfeed article, ‘How Millennials Became the Burnout Generation’, highlights the pressures facing a generation who, for the most part, have embarked on their careers in the aftermath of a global recession and are therefore less financially secure than their parents. The article has clearly resonated: it has been widely shared across networks, followed by many spin-off features from publications such as Business Insider and Good Housekeeping, to name a few. It’s now also spawned a book by Petersen, titled Can’t Even, which is already out in the US and will be published in the UK in January 2021.

We worry about our health and that of our loved ones, about the cost of rent and getting on the housing ladder and about responding to our WhatsApp messages on time

Surveys on both sides of the Atlantic have also highlighted the idea of a generation under pressure. In 2018, a Mental Health Foundation survey carried out in the UK found that over the previous year, 74% of respondents had felt so stressed they were unable to cope. The younger they were, the more likely they were to be affected: 30% of people aged 55 and over said they never felt overwhelmed or unable to cope, compared to just 7% of younger adults. That same year, a Gallup survey of US employees showed that 7 out of 10 millennials experienced some form of burnout, with 28% saying they felt it frequently or constantly compared to 21% of older generations.

Millennial or otherwise, our workplaces are not the only cause of stress. We worry about our health and that of our loved ones, about the cost of rent and getting on the housing ladder and about responding to our WhatsApp messages on time. We worry about whether we want to get married and have children; if we decide ‘yes’, then we worry about the children we’re raising, whether we’re neglecting our child-free friends, childcare arrangements and how this choice will impact our careers. We worry about everything we’re supposed to fit in around our work and family and friends: exercise, cooking healthy meals, housework, sex and sleep. And that’s before you get to the significant additional pressures you face if you aren’t cis, white, straight and middle-class.

There’s No Such Thing as an Easy Job is very much a part of this conversation, focusing largely on the pitfalls and pressures of the working world. While mostly tolerable, each of the five positions the protagonist takes comes with its own problems and despite her search for less cognitively demanding work, none of the roles allow her to take an emotional backseat. That said, this is as much down to her personality and self-expectations as those of her managers and colleagues – perhaps a sign of how millennials are said to seek meaning from their work. This is not to suggest that being invested in a job is bad, but this approach comes with additional anxieties many of us will recognise. There’s No Such Thing as an Easy Job highlights how we can’t – or at least, don’t – leave these worries behind when we leave the office, allowing them to permeate our personal lives. For example, during one job, stress and worry cause the protagonist to become snappy at home: a situation many of us will be familiar with, whether we’ve been the guilty party, recipient or both.

Although the narrator never blames her burnout on anything other than work, there are hints towards the other stresses many of us face – and perhaps some of them are linked to working long hours, as well as general societal pressures. She has little time to prepare lunches, relying on convenience food, restaurants and frozen noodles. Her role of writing facts for cracker packaging is to fill in for an employee who has gone off sick with the stress of not having a wife in his 40s. It also sees her inadvertently become an agony aunt to the general population, who start to write to her with questions about debt and their marriages.

One of the more significant issues addressed in the book is that of loneliness. This is hinted at throughout the novel, but its potentially devastating consequences are seen most clearly through the character’s postering job, where she encounters a community that feels preyed upon by a secretive organisation recruiting lonely souls for meetings – though there seems to be something far more unnerving about them, too. This section contains one of the novel’s most bittersweet and sad observations: “Nobody’s life was untouched by loneliness; it was just a question of whether or not you were able to accept that loneliness for what it was.” The narrator appears to have accepted that loneliness is simply a part of life.

The book also highlights the universal nature of these problems. While it rarely delves into the narrator’s social life, when she does mention her friends, it’s to say that she feels as though she can’t talk to them about some of her work concerns:

They were almost all of a similar age to me and were also just gritting their teeth and clinging on as best they could… Besides I didn’t want to worry them. I had one friend who was currently enduring a situation even worse than I had in my old workplace. Whereas I’d ended up quitting with burnout syndrome, she was still hanging on in there.

There’s No Such Thing as an Easy Job is not a perfect book. It took until the protagonist had embarked on her second job at the bus company for me to feel really engaged and invested. It’s also a little striking just how little we see of the narrator’s personal life. In some ways, it’s refreshing to read a book about a (presumed) single women in her 30s that doesn’t focus on big personal life choices, but some readers may be disappointed that we only really get to know her work persona. That said, despite some of my favourite novels being character-driven, this didn’t concern me much while reading this novel as I enjoyed getting to know the cast of supporting characters. It was only afterwards that I realised I’d learned more about many of them than the narrator herself. In some ways, though, the narrator’s anonymity makes her more relatable. While this protagonist’s experiences of draining workplaces are set in Japan, these are universal and recognisable wherever you are: she could be your friends, your colleagues or you.

Despite the book’s focus on workplace and life anxieties, she allows us to fully escape into the narrator’s world

Given the subject matter and some of its conclusions, There’s No Such Thing as an Easy Job has the potential to feel heavy, even pessimistic. No job is ideal, and all come with their own pitfalls. Most characters have concerns outside of the workplace, many serious. It feels like there’s an epidemic of loneliness. Like the jobs the protagonist takes on, once you start thinking about the book more deeply, it’s clear there’s more to it than first meets the eye. In fact, even the seemingly optimistic ending could potentially be read as nihilistic.

But this is where Tsumura’s prowess shines through; despite the book’s focus on workplace and life anxieties, she allows us to fully escape into the narrator’s world. Meeting her quirky colleagues and experiencing her idiosyncratic jobs provides an ideal and heart-warming antidote to real life and, given I’m writing this during a global pandemic that has introduced many additional job and life insecurities, that’s no mean feat. The novel is worth picking up if you’re interested in an engaging, gentle and often uplifting read that has a slightly magical-realist quality and also comments on and critiques modern working culture.

Despite Tsumura being an award-winning author in Japan, this is her first novel to be translated into English; hopefully it heralds the beginning of her becoming celebrated in the UK, too.

There’s No Such Thing as an Easy Job is published by Bloomsbury and out now in paperback.

There are two images in this piece. The first is an image of the book on a wooden desk surrounded by a notebook, pens, glasses and dried flowers. The cover of the book is also featured, which shows a dark-haired woman with her head down on a desk and an open laptop next to her, used with permission, courtesy of Bloomsbury.