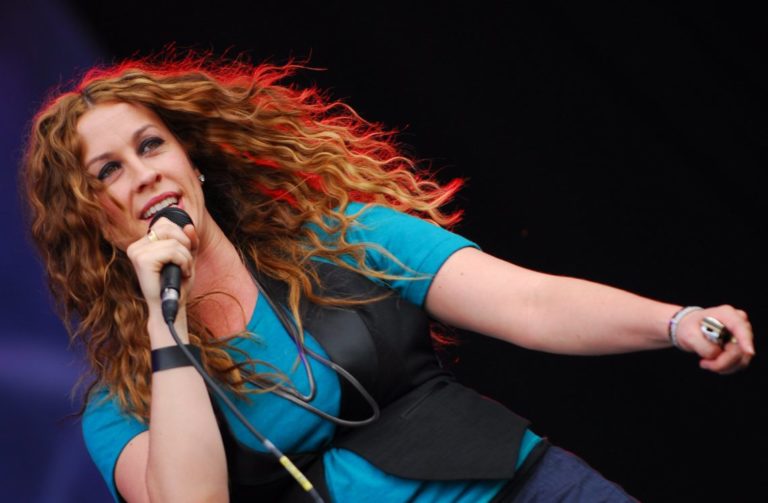 I’ve got one hand in my pocket. The other is with Alanis Morissette

My parents bought me Jagged Little Pill for my 11th birthday. It was my first CD ever and, in the months that followed, I would listen to it constantly. ‘You Oughta Know’ was a big favourite. I still recall an old friend and me loudly singing “when I scratch my nails down someone else’s back I hope you feel it” with the gusto of someone who actually knew what it meant. There was something about Morissette’s raw, angry, sad messages delivered in a unique voice that made me love her. Her music was completely different from the jazz and pop legends in my parents’ collection; she wasn’t afraid to talk about fear, about sex, about disillusionment in a completely unguarded way. As someone who was coming up fast on puberty, I latched on for dear life. That summer I went to see her in concert at the Bell Centre in Montreal, after which I knew what I wanted to do with my life.

I started writing songs a few years later and anyone would tell you that my style was similar to Morissette’s, with some Sarah McLachlan thrown in for good measure. The oppressive Catholic school I attended made me itch for individuality and self-expression. I hadn’t lived through much at that point, so I’d often write about books or movies – other people’s stories. It wasn’t until my 20s that I started having something to write about. The trouble was, at the time, I wasn’t writing anything.

I didn’t want to just write beautiful poetry, I wanted to directly and explicitly say how I felt. I was coming to terms with my anger, sadness and disappointment in a way that could only have been paved by Jagged Little Pill.

Between the ages of 17 and 28, I studied opera, which allowed me to develop the strength and nuance I had always wanted for my voice. But as anyone who knows the genre intimately will tell you, opera is a constrictive disciplinarian. There is no room for individuality in that world. I even had a teacher tell me to stop listening to and singing pop music because she thought it was affecting my sound. For 10 years I did what I was told and sang other people’s stories the way I was supposed to. Meanwhile, I was enduring a slew of toxic relationships, increasing anxiety and depression, not to mention the deaths of three grandparents inside a year. And I had nowhere to put those feelings.

I moved to London to seek a new life. I did a degree in acting which allowed me to express myself in an entirely different way. And I started writing songs again. I was back with a vengeance. In a way, my style was more Morissette than when I was 15, mostly because I was a woman who had seen some stuff by then. But also, in the 20 years since I’d first heard Jagged Little Pill, my musical knowledge had expanded considerably. I was not only being influenced by opera, jazz, and pop, I was also being influenced by Morissette’s own idols and colleagues. For example, Joni Mitchell’s entire back catalogue was on rotation. I couldn’t connect to the ubiquitous pop idols, so found artists like Björk, Janelle Monáe and Fiona Apple, musicians who weren’t afraid to express themselves truthfully and on their terms. They each express a deep musical curiosity and a merciless demand to be heard. I completed my first album, Out of the Playground – make of that title what you will – in 2018. It was exhilarating. I was putting my thoughts to music using all the knowledge of my varied musical education. I was like a painter who had spent 15 years cultivating her vision and was then handed a palette full of exquisite colour. This was my version of Jagged Little Pill. I touched on subjects that ranged from bullies at school to romantic disillusionment to my crippling anxiety. I was dipping my feet back into the songwriting waters for the first time in 10 years and it felt amazing because I was being honest. I was being myself.

It was time to face some demons. As I said, my 20s were filled with experiences similar to what Morissette wrote about in Jagged Little Pill: men lying to me, people letting me down, anxiety driving me to question my self-worth. So I wrote about all the bad relationships I had. Every single one. And I made Out of the Playground as a way to close those chapters in my life. I was writing lyrics like “I drank more wine when I knew you than any other time in my life” and “If I wanted to break the news for you I would tidy up and put myself away”. I didn’t want to just write beautiful poetry, I wanted to directly and explicitly say how I felt. I was coming to terms with my anger, sadness and disappointment in a way that could only have been paved by Jagged Little Pill.

When it was finally done it felt like a weight had been lifted off my shoulders. I truly believe I couldn’t have done it without Morissette. Because of her, I wasn’t afraid to be brutally honest, even when the truths I was writing about were sometimes extremely painful. But it was my turn to pay it forward. Listening to Jagged Little Pill all those years made swallowing even the toughest pills in my life that much easier.