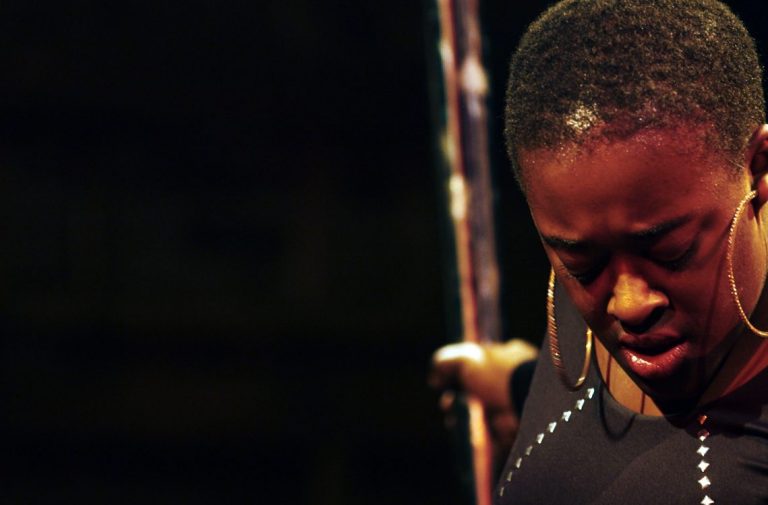 The seven short films of the Reframing the Fat Body event at the Barbican are introduced by Grace Barber-Plentie, their selector and a Barbican Emerging Film Curator. Wearing a blue suit and Nirvana t-shirt she says that she hopes we’ll find the films “fresh, thought-provoking and joyful” and that any fat people in the audience will feel beautiful and seen. In retrospect, think this programme definitely succeeds at that.

They’re an exciting group of films: made between 2016 and now, they span a range of styles including documentary, animation and fiction. Overall, the films give a good flavour of recent fat activism and a tantalising glimpse of a future world where fat people are no longer discriminated against.

The programme begins and ends with pole dancer Roz the Diva. The opening footage shot on a mobile phone of her dancing with a facemask is quite a contrast to the beautifully lit and shot Dangerous Curves which closes the event. I am not sure that this beginning really adds anything, but both Roz Mays and her film exemplify one of the key themes running though the programme: the concept of fat bodies as empowered and sexy.

The first film proper, The Fat Feeling, made by model and activist Talia A. Darling, is filmed during a photoshoot where plus size models are given some amazing makeup and all look, frankly, gorgeous. The beautiful visuals of the photoshoot and views across London contrast with some of the heart-breaking accounts from the models of the times they’ve faced fatphobia.

The next short, In Our Skin, an animation, is the only film to present the concept of existing in a fat body wholly positively. Director and animator Rosa Beiroa uses ever-moving drawings to represent wobbly bodies, with breasts, bottoms and bellies flowing in and out of each other in a mesmerising way.

A few of the films feature swimming and being in water. Aquaporko!, a documentary about an Australian fat synchronised swimming team has the most charming opening titles, where the femmes from Aquaporko! swim underwater. Director Kelli Jean Drinkwater interviews the swim team and they often talk about what fat bodies are ‘allowed’ by society to do and how much camaraderie they find with each other. Together they are empowered to take up space in a public swimming pool in a way that they might not do alone.

Similarly, though more obliquely, the subjects of the German film Riot Not Diet directed by Julia Fuhr Mann, take up space altogether in a town, a cornfield and wild swimming in a river. Although the film is fairly abstract, there is a lot of texture: choppy cuts, voiceover, grainy film, slow mo. It also features some of the most ‘unedited’ fat bodies of the selection – the tits here sag rather than being held up by corsets. I don’t really understand Riot Not Diet, but I still like it a lot.

Wearing a swimsuit in public and showing flesh is something that many fat people are made to feel uncomfortable doing, but also swimming and being in water can be the most incredibly sensuous thing

Butch Coyolxauhqui is another film that features animation but this time through the use of the old family photographs of its creator, Karleen Pendleton Jiménez, and images of the Aztec goddess Coyolxauhqui. The parallels drawn between Jiménez’s experience of her own body and the myth of the goddess are fascinating and over too abruptly for me.

We’re back in a swimming pool for the short fictional tale Bye Bye Body directed by Charlotte Benbeniste. Swimming is such a strong image throughout these films. I think it’s because wearing a swimsuit in public and showing flesh is something that many fat people are made to feel uncomfortable doing, but also swimming and being in water can be the most incredibly sensuous thing. Bye Bye Body tells its story so swiftly it’s over in minutes, but everything you need is there. In a large part this is due to the expressive acting of its lead, Kat Christiansen.

Then we are back with Roz the Diva and the final film, Dangerous Curves directed by Merete Mueller. In this documentary we see Roz Mays on stage, teaching in her studio and at home with her family. She’s an extraordinary performer, so fit and flexible when we are often invited by society to see fat people as lazy and weak. She shares a lot throughout the film – being forced out of her job because of her “cyber reputation”, the online abuse she receives, but also how her very existence empowers other women, and how much satisfaction and fitness she’s found through pole dancing.

It’s only looking back on the programme afterwards that I realise how incredibly gendered ideas about fatness are and how intertwined the fat acceptance movement is with feminism. Nearly everyone featured in the films is a woman or femme, and so often the films are about resisting the male gaze and rejecting patriarchal notions of objectified women’s bodies. All the films are from countries with relatively similar cultures (the UK, Australia, Germany, Canada and the USA) and I wonder how including films from other parts of the world might have changed or enhanced the message.

Taken together however, the shorts give a powerful voice to fat people. I go back out into a chilly London with a fresh view on how I and other fat people might interact with the world.

Most of the short films can be watched via the links in the text.

The feature image is from Dangerous Curves and shows Roz the Diva on the right hand side of the image close up. She is holding a pole dancing pole with her right hand, held far away from the camera, and closer to us we can see half of her face. Her eyes are cast down. She is Black and has closely cropped hair.