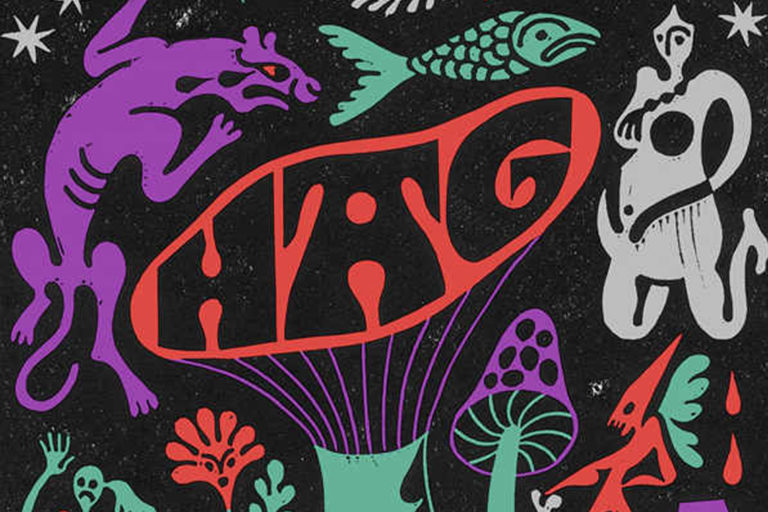 A modern collection of shape-shifting narratives

Hag: Forgotten Folktales Retold promises an anthology of stories “captured in voices as varied as they are vivid”. This I wholeheartedly agree with.

In her preface to the collection, Professor Carolyne Larrington explains why it is that the chosen tales are so unfamiliar to the vast majority:

Our British and Irish folktale heritage slipped away from us during the late eighteenth century and early nineteenth centuries, during those years in which traditional story transitioned from the oral to the printed. While European collectors were busy capturing, writing down, popularising and sanitising their stories…

In other words, our long-standing, shape-shifting oral narratives have been buried by popular fairy tales and their sun-soaked Disney reincarnations. They have been lying dormant. Hag is a celebration of the UK’s rich history of storytelling, but is by no means tethered to the past. It manages to look both backwards and forwards simultaneously, thrillingly, bringing together old and new.

The writers commissioned to rewrite the tales were given a freedom in their task which emulates the freedom of oral storytelling: ‘to expand and elaborate’ on what they choose. And indeed, all but two retellings initially emerged as podcasts: a true enactment of the oral tradition. But the freedom of Hag goes further, resulting in that diversity we were promised.

Those original stories are no longer than a couple of pages at most; some indeed are only a paragraph or a few verses long, but each author spins a brand-new tale out of the raw stuff she was given, sparkling, fresh iterations that transpose these universal themes into contemporary life.

Such was the variation of the tales in this collection which asks: What makes a folktale? What is the definition of a retelling?

Daisy Johnson sets the tone of the collection with her story ‘The Retelling’. Being the most literal in its narrative approach – the speaker talks about her writing task, and her struggle to find an angle on the original tale – ‘The Retelling’ is perfectly situated as it sinks us into the processes behind the anthology. As normality morphs into nightmare, Johnson’s story takes us willingly into an urban underworld and by the end of this first piece, we are primed and ready for whatever folk and fairy worlds the other writers have to offer.

Naomi Booth’s ‘Sour Hall’ purposefully and carefully unfolds a personal story – that of repressed trauma and female love – alongside a mythical boggart’s simmering presence. It’s a perfectly balanced modern retelling which unexpectedly differs from the interpretations to come.

Irenosen Okojie’s ‘Rosheen’ is unusual. It forms itself around a protagonist who seems to have a strange connection to dream worlds and unexplained visions. As the character Rosheen grows, changes and travels from County Kerry to Norfolk, multiple stories roll into one, and yet we don’t get close enough to know the character at the centre of them. It felt like a potential novel had been condensed down into a short story, and the impact suffered as a result. This story was visceral, vivid, thrillingly disturbing, but perhaps a little too thinly stretched across its multiple components.

The anthology travels to Scotland next, with Kirsty Logan’s ‘Between Sea and Sky’ – a tale involving the more widely-known mythical selkies. This story is brought instantly into life – and sound – by the spoken voice of the narrator: a mother chattering to her wordless baby, whose often amusing scenes are punctuated by the strange and retrospective voice of the grown child.

‘The Panther’s Tale’ by Mahsuda Snaith also centres around a mother and child, but not before we have been introduced to its captivating and deadly woman protagonist. Snaith is another writer who decides to give space to women’s sexuality and love.

Eimear McBride, like Daisy Johnson, embraces the act of storytelling and bounds her narration up in an awareness of the fairytale form, as well as a disdain for it. Though the storyline of her retelling didn’t wander far from the original tale, the tone of its speaker did. ‘The Tale of Kathleen’ gave the biggest nod to oral storytelling and would certainly shine in audio.

‘The Sisters’ by Liv Little is as heart-breaking as it is emotionally conflicting. It demonstrates the way stories – especially those involving love – are often spun from one perspective, by spinning it masterfully from three. It shifts through the thoughts and memories of three women as they navigate a central modern tragedy complicated by questions of sexuality and selfhood. This story doesn’t have ghouls or ghosts, but it stayed with me nonetheless.

Emma Glass’ ’The Dampness is Spreading’ is a downright scary story from the perspective of a midwife who has struggled for years to have a child herself. Although the crux is less easy to grasp, the story is extremely arresting and beautifully permeated by the midwife’s sadness, like the dampness, or the rain, “sitting between [her] skin and bones…”

‘The Droll of the Mermaid’ is the only story to have a male protagonist at its centre. Natasha Carthew uses a distinctive voice for her speaker and places the reader inside the landscape of his coastal world with great ease. The way this piece unfurled itself wasn’t the most compelling in the collection – I didn’t feel bound to the protagonist in the same way I did with others. But I certainly felt transported to Cornwall, and to another world made just as real as my own.

Some contributors, like Eimear McBride, stay close to their story, injecting new voice and attitude. Others keep only the bones, or even just a chosen limb, and then move freely into new territory

Hag closes with one of my favourite retellings: ‘The Holloway’ by Imogen Hermes Gowar. The prose of this piece is striking and ensnares the senses from the very first early-morning scene:

It’s going to be a hot day, she can tell, but the grass is cool and wet, and the tree-roofed Holloway at the end of the drive is dark as an ink-blot, all heavy with moisture and shadows. She stands in her bare feet by the kitchen door, listening to the silence lying smooth and plush like a field of snow or a sheet of good drawing paper.

‘The Holloway’ is a modern story of domestic abuse, told from the captivating perspective of a little girl and threaded through with the quiet presence of the ‘piskies’ of Somerset. Hermes Gowar uses the perspective of a child, Evie, to create the story’s mystical world, which the adults around her cut through with a searing reminder of reality.

Hag is a vivid and varied collection. Some contributors, like Eimear McBride, stay close to their story, injecting new voice and attitude. Others keep only the bones, or even just a chosen limb, and then move freely into new territory. That is the most exciting thing about this anthology: it opens up the possibilities of folktale to the modern reader and writer. There is no one way to tell a folktale, nor is there one way to retell it. It’s absolutely a part of our collective history, but that doesn’t condemn it as a form of the past; folktales and mythology can continue to form and mutate, finding new ground with new minds and readers.
This anthology also shows that folktales aren’t what we think they are, and they never really were. They don’t have to always be rounded, satisfying and moralistic. They can be dark, uncomfortable and open-ended. They can be whatever the storyteller chooses when they tell them.

It is the variety of approach which makes this collection – a stunningly-bound hardback, glowing with the mesmerising artwork of Sophy Hollington – so strong. Each writer has brought her own method, her own version of the story, the landscape, the ‘message’ – if there even needs to be one. And so all that the words ‘folktale’ and ‘retelling’ need to mean here is that these stories are being told how they were always meant to be: in that ancient tradition which has warmed the dark evenings – and spooked the kids – long before words were bound in hardback.

Hag: Forgotten Folktales Retold is published by Virago and out now in paperback.

The image shows the word ‘HAG’ in black capital letters. There are mythical creatures including a fish and a mammal in green, red and purple set against a black background.