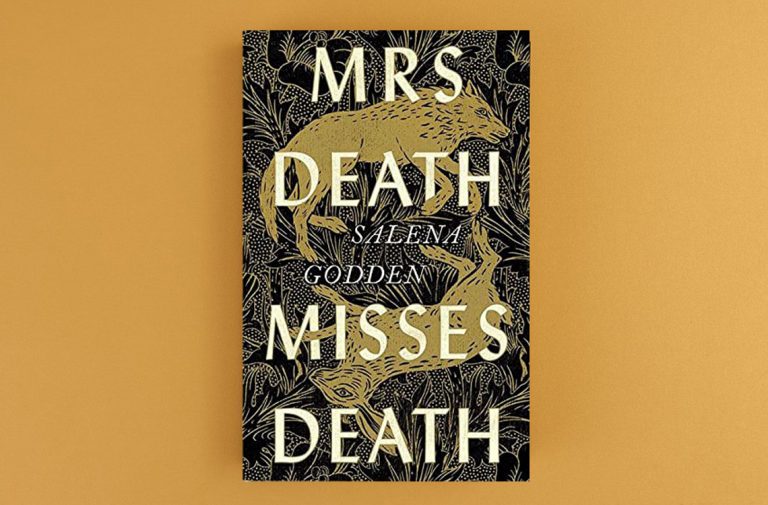 A story that demands and deserves to be heard

Mrs Death Misses Death is unlike any other book I’ve ever read. It begins with humorous disclaimers of what the book is not, warning the reader against any expectations, before throwing us into verse and diary entries. Throughout the work, writer Salena Godden mixes poetry, prose and song while managing to keep the book cohesive. Brilliant, powerful, unique, this book is exhausting to read and yet beautiful to experience. I will be shouting from my window to anyone who can hear me; Mrs Death Misses Death is a masterpiece of modern literature.

From the start, we do not know where we stand as a reader. The novel begins in a rush: suddenly we find ourselves deep inside the story without quite knowing how we got there. The first few pages are gentle hypnotic musings which make the book feel like a place of comfort, but suddenly we are dropped into the agony and terror of a massive tower block fire. This central event takes place the night when main character Wolf Willeford’s mother dies, the night when Wolf first meets Mrs Death and is very similar to but never specifically named as the Grenfell Tower fire of 2017. With this sharp change of pace, Godden tells us there is nothing comfortable about Mrs Death Misses Death; the story may be tender but it is also uncompromising and dark, and this is quite deliberate. This book is about death. Mrs Death, to be specific.

To read it is a lesson in brilliance

Mrs Death is tired and sad. Since the beginning of time she’s been the one to bring death to humans and to stand alongside them as they pass. She isn’t weary of the job – she sees it as a great privilege and an honour – but she’s tired in her soul.

Wolf Willeford is one of life’s hidden people. We meet Wolf as a child and then later as an adult, troubled and struggling. Mrs Death appears to Wolf several times after the night of the fire, and at each encounter she narrates her story, her thoughts, her poems and her songs through Wolf. In between her stories we step back into Wolf’s life and the two threads twist together with the voice of Wolf as the real-time narrator. In addition, Godden delicately sprinkles descriptions of other deaths throughout the book: some brutal, all sad. As complicated as this may sound, these different viewpoints mix together and create a flow like a river carrying sticks, leaves and bones along its way, each one separate and yet part of the same. To read it is a lesson in brilliance.

here are all your fears
in here, in here

A poet and memoirist, Godden is skilled at creating shapes with her words. She writes without arrogance. There is no pretence and no pretension, and when she gives us a more literary angle of her writing it is with a wink and a grin, with the full knowledge that she is mistress of her own pen. She does not shy away from the uncomfortable, either. If there are details that make the reader twitchy then there is no apology. In this work, she stands with the dead, with Mrs Death.

Godden’s background as a poet runs through every page. Her rhythmic musicality is evident in the prose from the start and I find myself reading entire sections aloud just to hear the words together.

Godden does not try to make the reader comfortable. We are warned of that from the start

Reading the middle sections, I want more plot, more of Wolf’s story and more of the dead character’s stories. I want to sink further into each of the threads running through the book and know more. I later Google some of the real life characters to learn what happened to them, and I find myself irritated by my own inability to just take this book for what it is. In some places, plotlines end without any solid resolution, but then, isn’t that how death works? If intentional, the lack of resolution makes sense here, and I refer back to my previous point; Godden does not try to make the reader comfortable. We are warned of that from the start.

Mrs Death Misses Death is a book that could be enjoyed in small stages, read slowly, savoured, with the time taken to appreciate the poetry in particular. Even in the more challenging moments, in the discomfort of suffering, it was too good to put down. As I read, I live those pages with Mrs Death; I crave a liquorice roll-up and the feel of the soft mud of the banks of the Thames; a slice of cold, stale pizza and the smell of overgrown roses in an overgrown garden. I feel Mrs Death’s desk under Wolf’s fingers and hear the scratch of the pen.

There are particular moments that stand out, many where Godden drops in the mention of real life deaths. In one example, just after the inclusion of a poem called ‘Say Her Name: for Sarah Reed, Black Lives Matter’, which is an incredibly powerful piece about a woman who suffered horrific atrocities at the hands of the police and through systemic racism, we’re brought back to Wolf’s mother’s death and feel the same heart-wrenching pain as we did at the beginning. In both cases we know these deaths should never have happened. None of the deaths in the novel should have happened.

She’s tired of it, tired of male pronouns taking over the world when men are brought to death just the same as women

A bright light against all the loss, the character of Wolf is fascinating. Placed with grandparents who neither wanted a child nor love Wolf following the night of the fire, Wolf has nothing to fall back on, to keep upright in the world.

My grandfather loved this garden and Rose loved roses but neither loved me.

Not specific with pronouns when she writes Wolf, Godden gently nudges us to question assumptions of gender. After a few characters are revealed to be women, Godden pokes fun at the reader and challenges the assumption that titles such as Dr are more commonly used by men. We are reminded that Mrs Death is often pictured in a male guise – one of the things she’s clearly finding so exhausting. She’s tired of it, tired of male pronouns taking over the world when men are brought to death just the same as women. She’s tired of human brutality and not just men against women; in one instance she also marks the cruelty by a mother to her child. Godden makes a point of the horrors that the mother herself experienced, but again, makes no excuses for the treatment of her child. She sets out the story as it stands and allows the discomfort.

Following the earlier suggestion that we think of Death not as a male character, as we have been encouraged to in the past, we’re then asked to consider how strange it is that this was ever thought to be the case.

I am here. Death is a woman. I am a woman. Surely by erasing me we have erased this power? By never portraying a woman as the representative of Death, the boss of Death, the figure of Death itself, one could debate that an important and fundamental disempowerment takes place. Perhaps this is what erasure looks like.

Mrs Death Misses Death may on the surface be a book about loss and endings but it is also a brave and funny view of living, and the space between the two. There is life here, and humour, and a challenging viewpoint. The book is filled with strong female and non-binary characters, grappling with the sheer exhaustion of holding their shit together and coping with the shape of the world.

Salena Godden has written a story that demands and deserves to be heard. Hypnotic and beautiful, tender and sad, Mrs Death Misses Death brings me life.

Mrs Death Misses Death will be published by Canongate on 28 January 2021.

The header image shows the book’s cover on a yellow background. The cover shows a gold illustration of a wold and rabbit circling each other on a black background, with the title in gold text over the top.