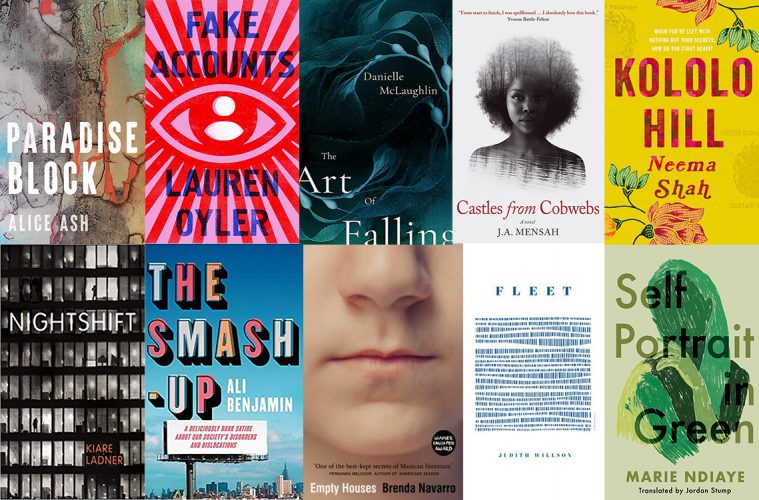 The editors of The F-Word’s fiction section select ten new titles to look out for in February.

Paradise Block by Alice Ash (4 February, Serpent’s Tail)
Paradise Block is an unconventional collection that treads the line between the disturbing and the delightful. Haunting yet often absurd, these interwoven stories lure us into a distorted world where our filter on reality is tinged with magical realism and mythology. These stories get under your skin.

Fake Accounts by Lauren Oyler (4 February, 4th Estate)
On the eve of Donald Trump’s inauguration, a young, unnamed narrator snoops through her boyfriend’s phone to discover his secret life as an anonymous internet conspiracy theorist. She’s not surprised, nor is she particularly upset, and plots to end the relationship on her way to the Women’s March. Written by a renowned and often lacerating critic, Oyler’s Fake Accounts is a darkly funny account of a shallow millennial man and the ways the internet and social media seep into our perception of reality.

The Art of Falling by Danielle McLaughlin (4 February, John Murray)
Things are getting back on track for Nessa. She’s rebuilding her marriage following her husband’s affair and is managing a retrospective for the late sculptor Robert Locke. But things begin to take a turn as the past intrudes on the present. A gripping debut from the celebrated Irish short story writer.

Castles from Cobwebs by J. A. Mensah (18 February, Saraband)
Winner of the inaugural NorthBound Book Award, Juliana Mensah’s Castles from Cobwebs tells the story of Imani, an orphan raised by nuns on a remote Northumbrian island. Imani’s life is changed following an unexpected phone call informing her of the death of her biological mother, calling her to Accra to attend the funeral. This compelling debut explores memory, race, spirituality and disconnected families and communities.

Kololo Hill by Neema Shah (18 February, Picador)
In 1972, Ugandan president Idi Amin ordered the mass expulsion of Ugandan Asians, calling for them to leave belongings and money and never return. Neema Shah’s stunning debut follows a family from Kampala to London, exploring migration, belonging and the lengths some will go to protect their loved ones.

Nightshift by Kiare Ladner (18 February, Picador)
Another debut on our list this month, Kiare Ladner’s Nightshift is set in the unsettling world of London’s night shift workers. Upon meeting the mysterious Sabine, 23-year-old Maggie becomes transfixed, and begins to lose herself – and the associated trappings of her diurnal life – in her growing obsession with becoming someone else.

The Smash-Up by Ali Benjamin (23 February, Quercus)
Taking inspiration from a classic Edith Wharton novella about a small-town love triangle, Ali Benjamin’s witty and ambitious debut novel explores fractured lives, family, activism and suburbia. When Ethan, founder of a media start-up, and Zo, a promising filmmaker, move to a rural community for a little more tranquility they find quite the opposite. A moving portrait of a shattered family.

Empty Houses by Brenda Navarro (25 February, Daunt)
A literary sensation on its original publication in Mexico, Navarro’s Empty Houses is an explosive debut. The novel switches between the sories of multiple women, one grieving the loss of an abducted son; and the one who took him. A striking and meticulous study of loss, pain and the complexities of motherhood.

Fleet by Judith Wilson (25 February, Carcanet)
Partly inspired by a 19th century instrument to record the migration of a star, Judith Wilson’s second collection draws on archive materials, historical documents and records, filling in the gaps of lost histories and voices. The collection begins in London in 1878, with a woman serving a prison sentence for abandoning her children. Little is known of her life or her husband, a migrant and dealer in ‘foreign birds and curiosities’, and her two children vanished from record. The collection evolves from here, with mysterious pasts, fleeting memories, migration and displacement.

Self Portrait in Green by Marie NDiaye (25 February, Influx)
Obsessed by her encounters with the mysterious green women, and haunted by the Garonne River, a nameless narrator seeks them out in La Roele, Paris, Marseille, and Ouagadougou. Self Portrait in Green is the multi-prize winning Marie NDiaye’s brilliant subversion of the memoir. Written in diary entries, with lyrical prose and dreamlike imagery, we start with and return to the river, which mirrors the narrative by posing more questions than it answers.

The image shows the book covers in the order they appear in the list. Clockwise from top left: 1) an abstract stone background overlaid with white text; 2) a pink and red block printed eye with the shape of a head and shoulders in the middle; 3) dark teal sea weed overlaid with white serif text; 4) the image of a young black woman whose hair reflects a forest scene; 5) a yellow background with illustrated flowers, and the title of the book in red block text; 6) the image of a high rise building in black and white, showing figures by some of the windows; 7) the title of the book in capital letters coloured blue, peach and orange, floating above a billboard; 8) a close-up of a persons lips and nose; 9) an abstract illustration of short blue lines, arranged to look like waves, on a white background; 10) the silhouette of a woman holding herself in shades of green.