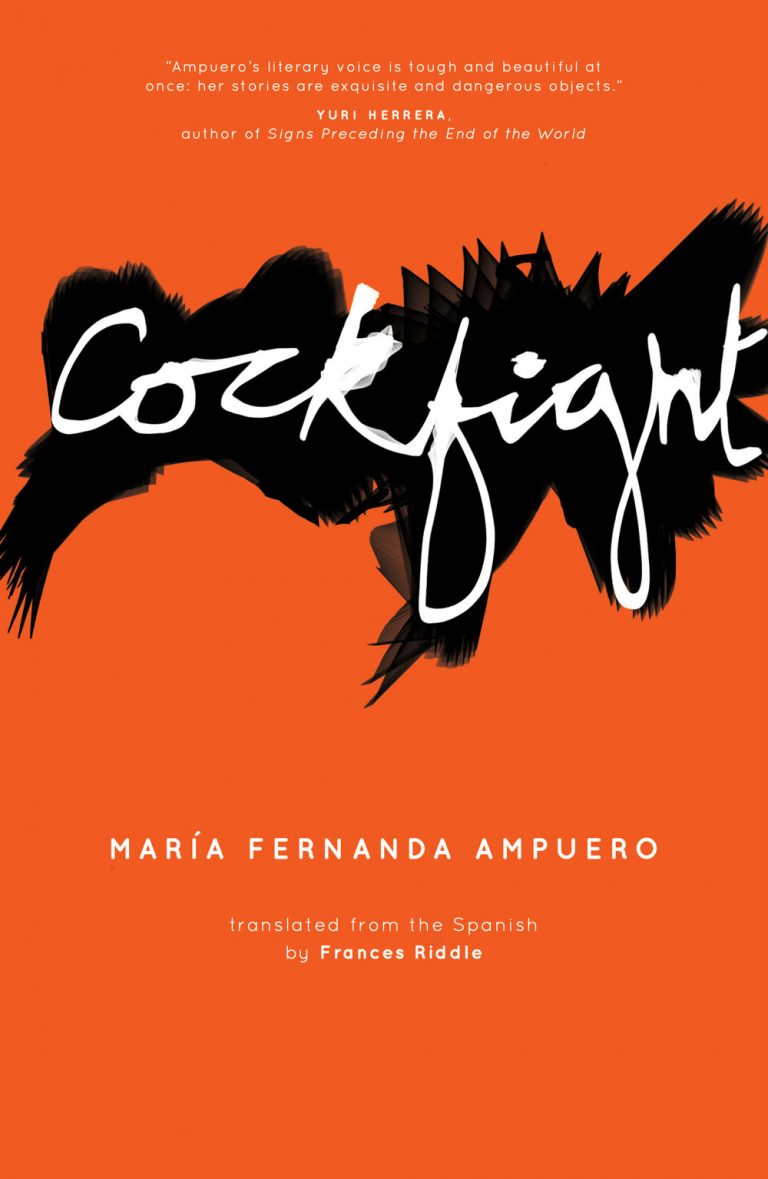 The interior life like we’ve never seen it before

“The word love hangs from the ceiling like a stalactite.” ­—Cockfight, p.73

María Fernanda Ampuero’s short story collection Cockfight (Influx), translated from Spanish into English by Frances Riddle, is not for the fainthearted. These stories consider the secret life of the home, the inflammatory ugliness of what occurs behind closed doors. Each story froths with gruesome imagery, physical abuse, sexual violence, animalism, indignity, trauma and incest. In the simplest terms, it presents the interior life like we’ve never seen it before.

Although all of the stories are very different, they each consider an element of the home, the domestic, or what ‘family’ actually means. In taking place behind closed doors, the traditional concept of home is supplanted by the horrific, loveless reality Ampuero constructs. She compels us to critique what a ‘home’ is: whether it be a location, four walls, a feeling or the company we keep. An unconventional family-cum-home dynamic occupies each story, where deceit, violence or indifference impersonate love. This is made all the more tragic in many of the stories by way of their child narrators.

It’s not the jarring, uncomfortable content which cements this book in the ‘difficult read’ category. It’s the nonchalance with which Ampuero presents these uncomfortable, horrific stories

From the very first page, the opening story ‘Auction’ takes us to a human trafficking auction and tells us of the protagonist’s childhood, infused with sexual abuse and horrific misogyny, resulting in her degradation to an animal-like state as a protection mechanism. And yet it’s not the jarring, uncomfortable content which cements this book in the ‘difficult read’ category. It’s the nonchalance with which Ampuero presents these uncomfortable, horrific stories. At no point is anything that happens to this protagonist conceived to be extraordinary; it’s as though everything is mundane, expected, a fact of life.

It’s through this facet of discomfort that Ampuero moves her readers to such a state of tension and unease that she commands our attention. She forces us to take our time while reading this slim volume and in so doing we have no choice but to allow the darkness she presents to occupy our consciousness. There’s no release from this grasp in ‘Pups’, a story which considers the overlapping relationships of family, friendship and intimacy in humans, alongside a family of pet hamsters. It’s a shockingly graphic story in which the description of smell creates a powerful synecdoche that adds to the revulsion of its content. Ampuero creates a bizarre parallel between the violent relationship between a mother hamster and her newborn puppies and that of the narrator and her childhood sexual molester. In each, Ampuero somehow sways us to believe that the abuser is acting out of love, that the abuse is actually a sign of devotion — “Nature correcting her mistakes” — which is indicative of this world Ampuero has created. It’s a world where we can be swept up into the most gruesome, horrific realities and accept them just as her characters do.

Although the majority of the stories centre on working-class families, ‘Ali’ and ‘Coro’ move to consider the upper echelons and the pervasiveness of gossip about what happens behind closed doors. ‘Ali’ is very effectively written as the rambling, excited, gossipy soliloquy of eponymous Miss Ali’s maid.  Both stories foreground crippling mental health issues and offer the perspective that life isn’t so much better for the higher classes; despite their material comforts, they are so bored and empty that they have no choice but to obsessively engage in slanderous gossip to prevent themselves from being reminded of how insubstantial their lives truly are. The way in which Miss Ali’s poor mental health is so carefully hidden by the rest of her family in ‘Ali’ and how it’s then dissected so brutally by the ladies in ‘Coro’ creates a tangible thread between the stories, both helping to ground the sense of place in the collection but also invokes that our lives behind closed doors may not be as secret as we wish.

This is also spotlighted in ‘Griselda’, where the entire neighbourhood is obsessed by the goings-on in the home of Miss Griselda and her promiscuous daughter Griseldita. They live in a man-less household and Griseldita is required to provide for the both of them. So, she uses the asset of her body and her allure for financial gain. Curiously, in being the financial provider, she also inherits a machista head-of-household mentality and neighbours are frequently criticising and frantically gossiping about the shouts, screams, scuffles and gun shots they hear emanating from the house. Griseldita occupies this liminal state of being expected to adhere to both archetypes of femininity and masculinity, which, even in Ampuero’s imagined society, is just impossible.

She somehow clashes together horrifying content with beautifully poignant sentences and sentiments, which seem both deeply inappropriate and at home within her stories

‘Mourning’ transposes this fickleness of attitudes towards women by focusing on two sisters, one of whom is considered to be the symbol of pious virtue and the other who is claimed to have been sexually promiscuous and is severely punished. Their brother, the head of the household, ties her up in an outhouse and leaves her at the mercy of a stream of men who come to visit her. It holds a mirror up to the hypocrisy of attitudes towards sexuality in men and women in a deeply unsettling way.

‘Passion’ also contemplates this hypocritical gender dialectic by reimagining the biblical story of Mary Magdalene and Jesus. In contrast to the original, Ampuero gives Magdalene the power to perform miracles instead of Jesus — but, typically, Jesus gets the credit and glory for them while she is subjugated and condemned to a life of shame, leaving her dependent on Jesus for survival. Ampuero invokes this wider commentary on women’s reliance on men throughout the collection, but it’s most pointed here. Mary Magdalene becomes a “grateful dog”, utterly devoted to the man she believes loves her; but he proves to care about his celebrity status and followers more. Her use of such animalistic imagery jars against the truly stunning and beautiful language that in any other book you’d want to underline and imprint to your memory. She somehow clashes together horrifying content with beautifully poignant sentences and sentiments, which seem both deeply inappropriate and at home within her stories. The use of language throughout the book is extraordinary and Frances Riddle has written a gorgeous translation full of sublime images and a measured, natural cadence.

Amid all of the dark, graphic, unsettling content, I couldn’t stop noticing this ubiquitous gender dynamic

There’s a curious upending of social conventions in this book, what with the references to incest, animalism, monstrousness — and yet gender archetypes remain. Women continue to be punished for being desirable, for using their bodies for commercial gain; they are controlled by machista men. So too are the men headily powerful, possessing a stereotypical anger. It’s as though, even in Ampuero’s challenging of normative society, there are some facets which will always be pervasive. Amid all of the dark, graphic, unsettling content, I couldn’t stop noticing this ubiquitous gender dynamic.

Though many recent women writers like Sayaka Murata and Eliza Clark have used shock, horror and ugliness to challenge societal conventions, this is unlike anything I’ve read before. I’ll reiterate: it’s not for the fainthearted, and I don’t think it’s possible to read in a single sitting. But Cockfight is definitely worth it for the visceral writing and haunting yet horrifying stories.

Cockfight is published by Influx and out now in paperback.

Cover image of Cockfight, used with permission, courtesy of Influx Press. This image shows the book title against a black and orange background.