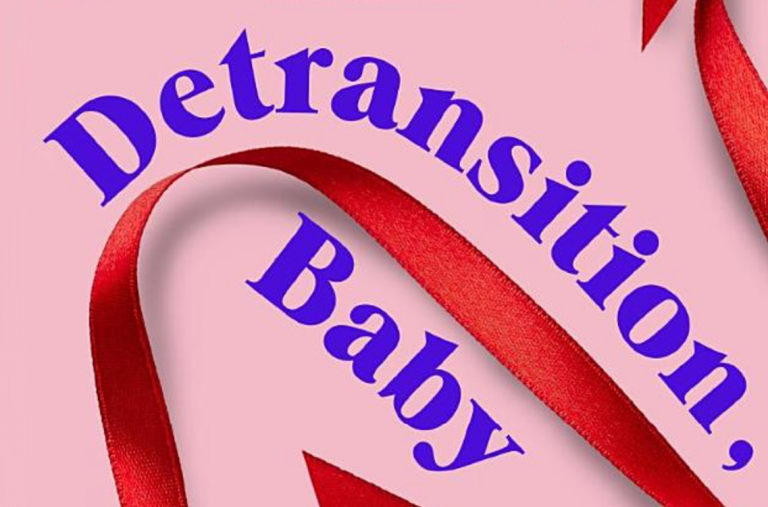 Detransition, Baby is an unapologetically queer book and one of the first written by a trans woman to be released with full fanfare by a major publisher. Hallelujah. This sparklingly intelligent debut novel from Torrey Peters tells the story of Reese, a city-dwelling thirty-something in a series of unstable relationships with inappropriate, unavailable men. Reese arms herself with a protective barbed humour, yet desperately yearns for the real love and family that seem tantalisingly just beyond her reach.

Early on, Reese lays out what she describes as “the Sex and the City” problem: as women advance in years, their search for meaning grows more urgent. For cis women, four distinct options, represented by the story arcs of the main characters in the show, are available. Find a partner, have a baby, define yourself through your career or find meaning through art. Yet, says Reese, “only the rarest, most stealth, most successful of trans women ever had the chance to even confront” this conundrum. She aspires to a bourgeois existence where such choices, limited as they might be, are at least available. So when Reese’s former lover and former trans woman Ames comes to her with an unusual co-parenting proposition, it isn’t something that she can easily dismiss.

Playing with timelines is an ingenious device to use for trans (and detransitioned) characters, enabling them to jump more seamlessly between identities than they could in real time

Ames – who has reverted from Amy to a closer approximation of birth name James – works in tech and is in a relationship with cis boss, Katrina. When Katrina announces that she is pregnant, Ames’ coping mechanism, of living at a slight emotional distance from the world, is threatened. Being perceived as part of a heteronormative family unit would be a dissociative step too far. The only way to make sense of it all is to bring Reese into the equation. Meanwhile Katrina, a woman of colour who has experienced both divorce and miscarriage, has faced her own obstacles and traumatic losses. Although Katrina’s own notion of her identity is temporarily disrupted by Ames’ revelation of her past, she feels empathy for Reese. Could the three of them bring up a child together?

Alternating dual timelines interweave the “before conception” story of Reese’s rollercoaster relationship with “sheepishly gorgeous” Amy. From their sweet first meeting at a trans lady picnic (held on a ‘militarily advantageous’ hilltop clearing that ‘a general might have chosen to make a stand’) to an ill-fated city car chase with the ‘after conception’ narrative of detransitioned Ames. In interviews, Peters has cited time-bending films such as Christopher Nolan’s Memento as influences. Playing with timelines is an ingenious device to use for trans (and detransitioned) characters, enabling them to jump more seamlessly between identities than they could in real time.

These fluid timelines are, in turn, punctuated by detailed detours and observations into trans life and queer culture; the kind of debates you can imagine Peters having with friends or on social media. Yet, as fictional characters, they are allowed a greater freedom to explore ideas than an individual might be granted these days on Twitter. One particularly powerful and elongated musing from Ames likens a bereft generation of trans women, who lost so many of their elders to suicide, overdose, HIV and secrecy, to juvenile elephants orphaned by gamekeepers.

Pronouns are used interchangeably depending on how Amy/Ames identifies within that particular timeline and, with this, there’s a relaxed irreverence about the potentially taboo topic of detransition. Ames has made a decision on how to present in the world based purely on a mathematical weighing up of external versus inner conflict. Day-to-day life as a trans woman can be tough. Maybe too tough.

As a cis gay female reader of a certain vintage, who grew up in It’s a Sin-era England, when homophobia was as vile and vicious as transphobia is now, I found so much to relate to in this book. Themes of constantly fashioning and refashioning a metaphor-rich manifesto for day-to-day survival and finding comfort in alternative non-biological forms of mothering resonate. I too have agonised over the baby question as the evolution of queer possibility started to make biological parenting feel ever so slightly more broadly available.

Yet for all the deep roots of queerness that support the ebb and flow of this bittersweet story of conflicted and messy humans, there is another intriguing parallel that is deftly drawn. The book is dedicated to “divorced cis women who had to face starting their life over without either reinvesting in the illusions from the past, or growing bitter about the future”. Indeed, in my own work about breakups, I have discovered a sense of reinvention in heartbreak that reverberates with echoes of my queerness. At certain points in our lives, perhaps we all experience a limiting and liberating otherness.

Detransition, Baby was published by Serpent’s Tail on 7 January 2021.

The header image is a close-up of the book cover, showing the words “Detransition, Baby” in purple serif font on a pink background, surrounded by a red ribbon.