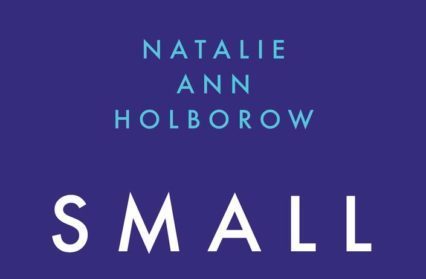 A toolkit for emotional heaviness

There aren’t many poetry collections that have stayed with me for a prolonged amount of time, nor many poems that have come back to me in the dead of night or while I’m out shopping for essentials. However, Natalie Ann Holborow’s Small has resonated with me in such a way that it now seems unimaginable that I could have navigated my day-to-day life without this haunting, vulnerable and comforting collection of poems that are ‘small’ in name and anything but in nature.

Small is Natalie’s second collection, following on from her debut And Suddenly You Find Yourself that was launched at the International Kalkata Literary Festival and was listed as Wales Art Review’s Best of 2017. Throughout the new collection Natalie presents the secretive and paradoxical nature of living in the shadow of an eating disorder, as well as navigating femininity, type 1 diabetes, heartbreak, travel and understanding her own roots. To begin with, we are presented with ‘Never Date A Poet’, a combination of vivid and intuitive imagery that welcomes the reader open-armed into the collection that they are about to embark upon. This particular poem echoes nostalgic girlhood, romance and a sense of homesickness that you only feel when looking back at memories of your sixteen-year-old self with rose tinted glasses.

“She says never date a poet / they are forever

bowling their souls through doorways /

to the moon / perhaps then you will confide in her

you have always adored poets”

In this passage, Natalie explores advice that was once given to her. However, she is now exploring this memory as a poet herself, analysing traditional and nostalgic ideas of what a poet is generally seen as. Swansea, where Natalie was born, was also the birthplace of Dylan Thomas and this particular passage brings to mind images of the canon of poets that we are taught about in school, including Thomas. In conjunction with this nod to the canon of literature are the lines “perhaps then you will confide in her / you have always adored poets”. It brings me straight back to my own Welsh girlhood, where anything slightly mysterious was adored and sought after, poets being one of them, the band Arctic Monkeys being a close second.

Throughout this collection there are several poems dedicated to Natalie’s ‘Small’, who Natalie presents to the reader as a second self of sorts, an intrusive commentator on her day-to-day life, from ‘Good Morning Small’ to ‘Small Takes a Bath’ and the heart wrenching ‘Small Sends Him Packing’. Through Small, Natalie brings to light the different scenarios in which the shadow of an eating disorder can disrupt your daily life. Between 1.5 and 3.4 million people in the UK are affected by an eating disorder; most of these will have developed through adolescence. Natalie presents the lived experience of these numbers through the difficult and raw relationship between herself and Small, where the battle is trying to reclaim her space, her mind and her thoughts from her eating disorder. This relationship constantly shifts from poem to poem, the reader being introduced to various situations which demand a pause for breath and reflection. It is in this thread that we find the underlying commonality between each of the poems titled around Small: the private battleground that exists in the mental space between an individual and their eating disorder – no man’s land.

In the following verse we see how Small has become the third wheel in a relationship, battling not only the narrator but also the unnamed voice of ‘Him’. This is an example of the overall theme of the collection, which is to shed light on the hardships of everyday life that exist when you live with an eating disorder.

“He is demanding and she a storm

giggling in his face on borrowed breath,

into the sift of the pillow, feathers tossed

It is astounding the way in which Holborow tackles the types of heaviness that we all encounter at different stages of our lives. Her poem ‘Attics’ echoes the endings that I have read before in the works of writers such as Plath, Woolf, and Szymborska, taking the same trip down the path of nostalgia. In ‘Attics’, Holborow leads the reader to confront their own ideas of past endings, holding our hand throughout. The line ‘I started digging for you amongst the tinsel, each memory’s wizened foil’ mirrors the difficulty we experience when faced with accepting the more sinister endings that life throws at us. ‘Identification’ by Wislawa Szymborska does the same: “He really was supposed to get back Thursday. But we’ve got so many Thursdays left this year.”

Similarly, with her poem ‘Grief’, Holborow breathes life into a subject that is largely misunderstood, burdensome and painful to confront. The 18 lines of the poem are soft and honest, full of round vowels that are comforting when read aloud. The below verse is vivid in imagery and explores the frantic questioning and strange optimism that can strike in the early days of the grieving process. In particular, the questioning of the divine and the denial that loss has happened in the first place:

“Maybe God will do something

with the flaccid roses, freeze

into the jug and bring them back,

Natalie has expertly provided a lyrical journey that paves our understanding of a body longing to be nourished and to be fed, as well as reminding us that we are built with the strongest of stuff. This collection is mesmerising: it is not often that I feel I am ‘better’ for reading something, but Holborow has presented me with a body of work, a toolkit with which I, and I’m sure many others, can tackle and describe the Smalls of this world… Thank you for that, Natalie.

Small is published by Parthian Books and out now in paperback.

Cover image of Small, used with permission, courtesy of Parthian. This image shows a woman’s silhouette surrounded by a light blue swirling against a dark blue background, as well as the book title and author name.