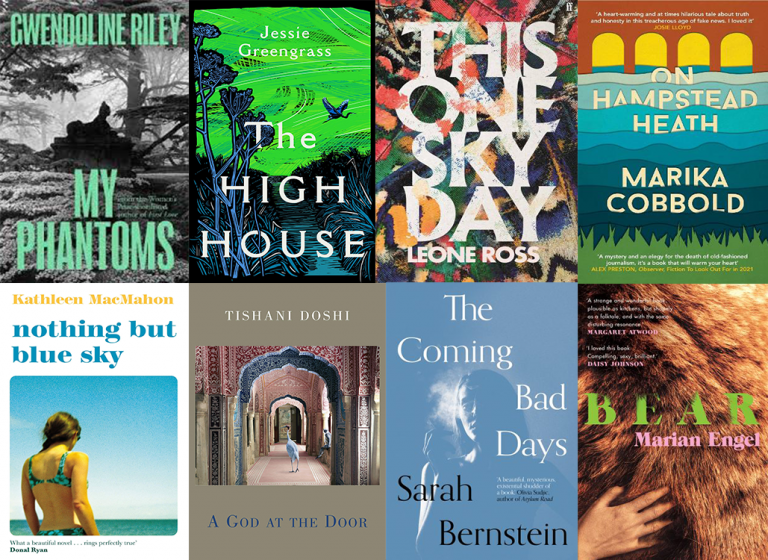 My Phantoms by Gwendoline Riley (1 April, Granta)
Nominated for this year’s Women’s Prize, My Phantoms is a fearless, darkly witty novel anatomising a mother-daughter relationship gone awry. Extroverted Helen – or Hen, as she is known to her friends – has always haunted her daughter Bridget. Now, as Helen is dying, the pair must confront their toxic relationship.

The High House by Jessie Greengrass (1 April, Swift Press)
Another writer familiar with the Women’s Prize (her debut novel, Sight was shortlisted in 2018) in Greengrass’s second novel, an ordinary family prepares for climate catastrophe. A stunning novel of the extraordinary and the everyday, The High House explores how family can be impacted by unexpected change, and events outside our control.

This One Sky Day by Leone Ross (15 April, Faber and Faber)
Set in a fictional archipelago called Popisho, where goats are jealous, gods are mischievous, vaginas drop out unexpectedly and everyone is a tiny bit bored with magic, Leone Ross’s new novel spans a single day. Ironic and sweet, dark and light, serious and silly, This One Sky Day questions the nature of love and addiction and creates a world that both satirises postcolonial society and celebrates oddness.

Nothing But Blue Sky by Kathleen MacMahon (15 April, Penguin)
Is there such a thing as a perfect marriage? Following the unexpected death of his wife, Mary, David reflects on their twenty years of marriage and seeks to learn as much about his wife as he can. A tender story of the complexities of relationships.

A God at the Door by Tishani Doshi (22 April, Bloodaxe)
This vast collection of poetry covers topics as broad and encompassing as feminism, class, poverty and war. A God at the Door is an unflinching collection that pinpoints a moment in history, covering past and present, universal and everyday.

Bear by Marian Engel (29 April, Daunt Books)
First published in 1976, Bear was once cited as the most controversial novel in Canada and is now undergoing a huge revival. This surreal novel follows Lou, a lonely librarian who engages in a close relationship with a bear.

The image shows the book covers in the order they appear in the list. Clockwise from top left: 1) a dark figure in black and white surrounded by woodland with the title in light green font overlaid, 2) a blue illustration of a river or pond with a stark green painted sky, 3) red, orange abstract printed patterns, overlaid with the title in white serif font, 4) a bold illustration of blue waves in front of a rust-coloured bridge, with the title inset, 5) a square image of a woman on a beach, showing the back of her head and long brown hair, set on a white background, 6) a blue bird inside a decorative interior, 7) a pale blue cover faintly showing the silhouette of a woman smoking, 8) the close-up of an animal’s fur, with a woman’s hand caressing it.