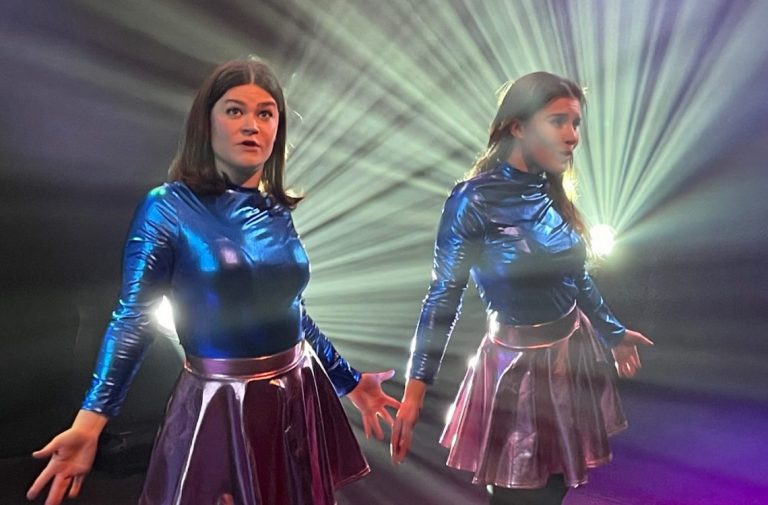 How to rule the world

General Secretary is a digital theatrical experience from comedy duo Thick ‘n’ Fast being streamed from Applecart Arts in east London. In it, writers and performers Cassie Symes and Georgina Thomas consider what would happen if, by some chance, they were appointed heads of the United Nations. Instead of having no power in the face of the Covid-19 pandemic, what if they had all the power? In idle moments, I have often wondered if demarchy, or choosing our rulers randomly rather like jury service, might be the true way forward; anyone who wants to be a politician almost by default shouldn’t be allowed to. In General Secretary we get a chance to try this idea out.

As the lockdown has forced theatre to become digital, companies have approached it in various ways. Some have performed pieces live with interaction, which has a lot of the immediacy of theatre. Some have streamed stage performances as if they are live, though they’ve actually been previously recorded. Some have made short films which you can watch at your leisure. With General Secretary comedy duo Thick ‘n’ Fast have made a short film, but you buy a ticket for a specific time slot – as I click on the link, I get the experience of settling down at a specific time to see a thing, but it is still essentially a short film hosted on Vimeo.

Once they’ve moved into their surprisingly basic office at the UN, the pinboard behind them is a total joy, including a note saying: “Live, Love, Laugh – POLICY”

Thick ‘n’ Fast have made the most of the possibilities of filming. It’s shot at several locations including a home, the stage of Applecart Arts and one moment in a very empty street. Green screen is used quite liberally. They’ve done well within the limitations of their budget to make it all visually interesting including some great use of wigs. It feels like a film, rather than a filmed stage show.

There are a couple of technical issues. The sound is both quite quiet and to my ears a little muddy – I have to plug my laptop into my speakers to catch what’s being said. I try turning on the subtitles but on the performance I watch early in the run they are not yet actually synched to the speech; there’s nothing for half the film, then all the words come up at once. It’s an early performance that I see however, and so technical glitches might have now been fixed. We begin with Symes and Thomas sitting at their shared kitchen table, working from home in the way that many of us have had to over the past year. They seem overwhelmed with work, or “adminton”, even though neither of them seem to have particularly high-powered jobs. They reassure each other that really, they should be in charge. This is the moment when the UN gets in touch with them to explain that, despite their lack of legal or international experience, they have still been appointed the new joint heads of the UN, or its general secretary. They take it relatively calmly: “Why not us?”

Symes and Thomas are very funny writers and performers. I particularly like the background gags that are scattered though the film. The Zoom look-a-like that the UN use to call the pair includes options to raise a “Nuclear Alert” and “Raise Hand to Ask Respectful Question” in its ribbon along the bottom. Once they’ve moved into their surprisingly basic office at the UN, the pinboard behind them is a total joy, including a note saying: “Live, Love, Laugh – POLICY”.

But although it’s all charming and great fun, some of the jokes rely on fairly dated stereotypes. There’s a “reciprocal orgasm tax” levied on those who don’t make sure their partner comes – presumably men – which makes me feel like I’m reading a copy of Cosmopolitan from the 90s. One of them uses her new found powers to make sure her ex knows she’s actually doing really great now, thank you. And of course, being women, they turn on each other. Among all the ludicrousness of the idea of the show, this pretty standard plot point seems a bit worn out and trite. I can’t say though that if I’d watched the same material on stage in the middle of a laughing audience that it would have bothered me as much.

There are a lot of ideas in General Secretary. It touches on socialism, big pharma, the role technology plays in our lives, how illegal drugs drive a lot of world crime and whether Eurovision brings countries together, but none of these ideas are explored in any depth. Of course it would be ridiculous to expect a 60 minute comedy show to spell out exactly how to achieve world peace, but I can’t help thinking that there might have been a step or two further to take investigating one or more of these subjects and the overall show would have been better for it.

Overall however, Thick ‘n’ Fast have made a funny, interesting, inventive show that is both inspired by the pandemic and makes the best of use of its imposed limitations. It’s 60 minutes where we get to dream about what a world run by women might be like. It could be good, reciprocal orgasm tax or not.

General Secretary is running until this Saturday 24 April online from Applecart Arts.

Both images are by The Other Richard. The feature image shows Cassie Symes and Georgina Thomas on stage with bright lights behind them. They wear matching shiny blue and pink costumes and stand with their arms out to their sides singing. The image in the text shows them both looking straight and seriously at the camera. We can see their heads and shoulders and they’re holding hands with their hands raised so we can see them. The background is yellow.

The trailer includes snippets from the show of Thick ‘n’ Fast including moments on stage, in their home and from their ‘UN office’. There is no dialogue and dramatic music plays over the top.