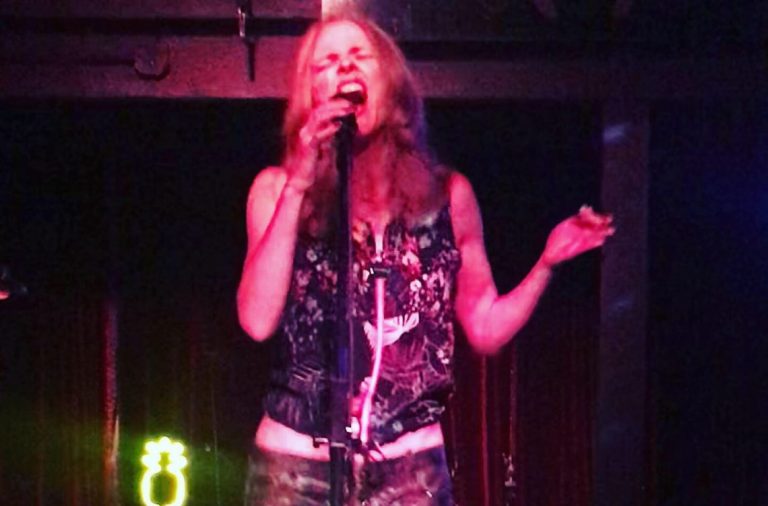 “Something about the term ‘gag order’ got me”

Born Stephanie Carlisi in Los Angeles, punk/EDM crossover artist Franki Pineapple has incredible amounts of energy. Dedicating her life to storytelling, she is a novelist, journalist, screenwriter, poet and spoken word artist. She first dipped her toe into music in her 20s, when the legendary songwriter and actor, JD Souther of the Eagles, hired her to transcribe his lyric journals. After her producer partner Nataraj Tribino (who has also produced artists such as PM Dawn and Nile Rodgers among many others) suggested the name Franki Pineapple, her logo was created by John Pasche, who designed the iconic ‘lips and tongue’ logo for the Rolling Stones.

Her music career was developing according to plan, until Apple Inc. saw Carlisi’s quirky stage name. I had the opportunity to ask her over email what happened next…

What made you choose the name Franki Pineapple?
Coming from a strong, close-knit Italian family, I had always been attached to my given name, Stephanie Carlisi, and had no intention of taking on an artist name. In 2016 I met music producer Nataraj Tribino and we began a musical collaboration.

One day I asked [Tribino], “What about Pineapple?” between bites of pineapple fried rice. “That’s it! I love it. It’s sexy, it’s memorable and a pineapple is sweet and soulful on the inside, tough on the outside, like your musical sensibilities,” Tribino said.

I began performing, creating, branding under the name “Pineapple.”

About two and a half years later, I decided to legitimise my branding. I hired an attorney and began the arduous process of [US] trademarking, but my attorney found I would have little to no chance of procuring the generic name “Pineapple” as a musical artist. He sent me back to the drawing board and told me to modify the name into one more unique.

My father, who passed of a drug overdose when I was five, was named Frankie. And then Apple got in touch?
My attorney researched and found Apple Inc. had recently also opposed several other small businesses who used fruit in their branding. He […said it looked a lot to him like] “trademark bullying,” a known practice by large corporations in the trademarking world. […] Clearly there was zero chance of “Franki Pineapple” being confused with Apple Inc., Apple Music, etc. in the marketplace?

How did you approach the case?
My attorney made contact with the attorney overseeing Apple Inc.’s opposition and they reached an “agreement-in-principle about how to resolve the matter”. At the time, Apple’s attorney referred to the pending agreement as a “fairly simple signed undertaking”. I was told Apple would essentially agree to drop the opposition if I added my name to the description of goods and services [in the trademark registration]. So, the registration of my trademark would be listed as: “by Stephanie Carlisi under the stage name Franki Pineapple,” although I would not be required to add this on to my products, only in the description of goods and services in the government trademark database.

At this time, my attorney advised we should also proceed to trademark my pineapple grenade logo on top of the Franki Pineapple name and incorporate it into the settlement with Apple Inc., as it became clear they would also (absurdly) oppose my logo, since it incorporates an appropriation [image] of a fruit in it. This was in late January [2020]…

My attorney sent me the “fairly simple signed undertaking” to look over and it was so confronting.

The first point of the agreement that bothered me was the title: Confidential Undertaking. This document was asking me to agree I would never discuss the agreement or my experience with anyone.

How did you respond?
That night my partner and producer [Tribino] was on the phone with his sister telling her about my suit with Apple Inc. I freaked out on him and told him he could not talk about it to anyone because it was a confidential undertaking that I would be signing. My boyfriend looked at me and said: “That’s a bullshit gag order. You’re allowed to say whatever you want and so am I.” Something about the term “gag order” got me. I am an artist with an independent spirit who believes in almost nothing more than our [US] First Amendment right to freedom of speech.

What were the next few months like?
I became obsessed with my Apple Inc. case. I was anxious, stressed out and physically, emotionally, mentally, spiritually sick over it. I could not sleep and found myself googling “Franki Pineapple trademark” ad nauseum in the middle of the night to see progress on the government’s trademark website.

Articles and publications began to pop up regarding Apple Inc. opposing small businesses appropriating [using] fruit in their branding. The public were angrily tweeting about the lawsuits and sharing information on social media.

Full of resentment, I would obsessively email my attorney during frantic meltdowns. This was when he gave me the exact advice I needed to hear – something like: “Please try to focus your attention on something else right now, and let the firm do our job in building our defence against this opposition; this is what you hired us to do.” Something clicked for me in that moment and I knew there was a spiritual lesson at hand.

My story with Apple is a typical David and Goliath underdog situation in which I was the tiny, (supposedly) weak opponent facing a powerful adversary. How often historically have women exemplified the underdog in our struggles against ‘the man’? All too often!

How did this journey end?
One day I was in the zone editing my podcast when my cell phone rang.

I declined the call and went back to editing. A text message came in from my attorney telling me to call him as he had big news; I realised the call had been from him. I was so deep in my creative process, I had all but forgotten about my Apple lawsuit. I called my attorney immediately and he told me: “We won!” I was speechless as this news hit me.

My attorney explained […] that Apple was set to fight, but he had opened up an eye-to-eye communication exchange with the attorney overseeing the case for Apple.

Soon after, the [Apple] attorney got back to my attorney and informed him they would drop the opposition as long as I was still willing to add “Stephanie Carlisi” to the description of goods and services, which we had no problem with, and which is what they had offered in the first place, nine months before.

Do you think big corporations need to stop suing smaller businesses and individuals for things that will never ever impact their business?
Absolutely! I believe in freedom, entrepreneurism and individualism in a fair marketplace and in the arts, above all else.

Do you think that your story with Apple shows that no matter how big the oppressor, women can’t be stopped?
YES! I absolutely believe this to be true. My story with Apple is a typical David and Goliath underdog situation in which I was the tiny, (supposedly) weak opponent facing a powerful adversary. How often historically have women exemplified the underdog in our struggles against ‘the man’? All too often!

[I feel] as though I, an unknown, independent female artist, won my battle against a giant in a man’s world.

Franki Pineapple’s song ‘Fuck It Man!’ inspired by her experience can be listened to here.

The feature image is of Franki Pineapple singing on stage. She is singing with conviction into a standing microphone in front of her. The picture is a bit blurry and she is wearing a dark top with no sleeves which shows a little of her midriff. A neon pineapple can just be seen behind her.

The image in the text is Franki’s logo. It shows the words “Franki Pineapple” in a red and black cursive script over a yellow explosion burst. This is superimposed over a grey grenade image which has red pineapple leaves on its top.