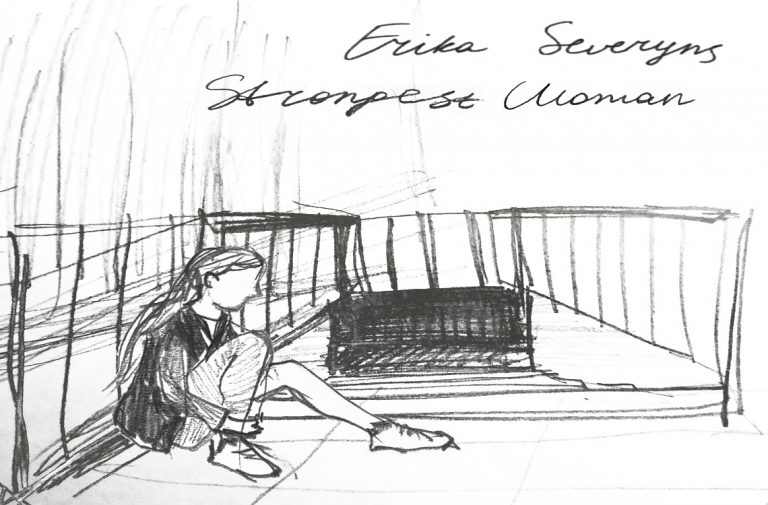 Being the strongest woman I only had one friend in Berlin when I arrived, so I set to writing posts in Facebook groups and swiping until my thumb hurt on Bumble and Tinder, hungry to meet new people. A friend from home told me he knew someone in Berlin and suggested putting us in touch, and I grasped the opportunity.

We met up at a bar and had a couple of beers each. I was getting tipsy – laughing loudly and talking too fast. After that, we got beers from a nearby shop and went to his place because I needed to pee (a woman’s plight, always struggling to find a public toilet). I sat down on the floor, drinking another beer and running my eyes over the guy’s bookshelf, as I noticed the room spinning around me. A wave of nausea washed over me, and I had to lie down on the couch in the corner of the room. “I don’t get like this from alcohol,” I thought at the time. I was too sick and confused to dwell on it, though.

He lay down next to me. We were still talking because I didn’t want him to see how sick I felt – I was embarrassed about feeling so bad after four beers. Then he put his arm around me, and a realisation flashed through my head – he thought we were going to have sex. The idea hadn’t crossed my mind until that moment. I jumped up and bolted out the door, making a rash and probably confusing escape.

Walking down the street, I remember feeling stupid – how had I not realised that was where the night was going? Perhaps I should have been clearer with my intentions (or lack of them)? Classic me. But then I don’t remember anything.

The next thing I knew, I was standing at the U-Bahn (the Berlin metro station), staring at Google Maps on my phone, unable to move. I saw the train stop in front of me and I knew I had to get on it, but I couldn’t bring my body to take the necessary steps. I didn’t understand what was happening, and a feeling of pure panic enveloped me until I sank to the floor and started crying. I didn’t know what to do – I was so close to the platform but walking there seemed impossible.

I don’t know how much time passed, but I forced myself to go outside for fresh air. I sat down on the ground outside the station, my red face streaked with tears. A girl who was walking past stopped and asked if I was okay. As she did, I started sobbing and shaking my head. I think that girl saved my life. She gave me water, lifted me off the ground and took a taxi home with me, before escorting me to my front door where I puked my guts up. I’d never thrown up from alcohol before. As I undressed and got into bed that night, I wondered: had I been drugged?

The day after, I went to the hospital, but more than 12 hours had passed and it was too late to see if there were drugs left in my system. I didn’t get raped and I’m grateful that the night ended how it did. I’m unsure what would have happened if I’d stayed, or who exactly drugged me – if it was that guy or something that had happened earlier at the bar. Ultimately, there is so much that I don’t know, and it’s that uncertainty that keeps haunting me.

After this happened, I surrounded myself with women friends, building a community that is still holding me up today. Through it all, I listened to other stories of women who have had similar – or worse – experiences. We talk about it around our kitchen tables, and there’s a glance of recognition when we overhear a familiar story whilst in a bar, or a hand squeeze when I tell someone what happened. Even though I didn’t get raped this time, the statistical odds of it happening someday are against me. But we try not to talk about it that much – it would bring the mood down in our day-to-day conversations about online dating or work problems.

That’s why I wrote the song ‘Strongest Woman’. Every woman has to be the strongest woman she knows not to be scared to walk down the street at night. I wrote it the night after I was drugged because I needed to hear it. Many songs exist about being drugged, raped, stalked, abused or assaulted, but I’m not sure how often they enter the mainstream, despite being common experiences for so many women. Why are we not talking about this more?

The proceeds from the Bandcamp sales will go to the Good Night Out Campaign – a UK non-profit that’s creating safer nightlife by training up venues, event organisers and communities to respond to and prevent sexual violence. I learnt about this particular campaign when I was 19 and working on a university essay about safe spaces at festivals. I didn’t know much about safe spaces back then. I believed that the world was a safe place in general; I still think it can be. But for now, I need my safe spaces so that at least for some time, I can forget about having to be the strongest woman I know.

‘Strongest Woman’ is a folk song written by Erika Severyns which laments sexual assault and drink spiking. You can listen to it on Soundcloud and buy it on Bandcamp to contribute to the Good Night Out Campaign.

Image 1. A photo of Erika outside. The image shows Erika sat down and turned to face the camera, although looking off into the distance. She has long, wavy blonde hair, and is wearing a grey dress with what appears to be a pale floral pattern and a black leather jacket. There is foliage surrounding the shot. Photo taken by Denise Dombrowski.

Image 2. Artwork for the song release. The image has a completely white background and is quite a stark pencil sketch of a figure with long hair sat on the floor outside a railway or underground station. The name of the song, ‘Strongest Woman’ and Erika’s full name appear in handwriting across the top right of the image.