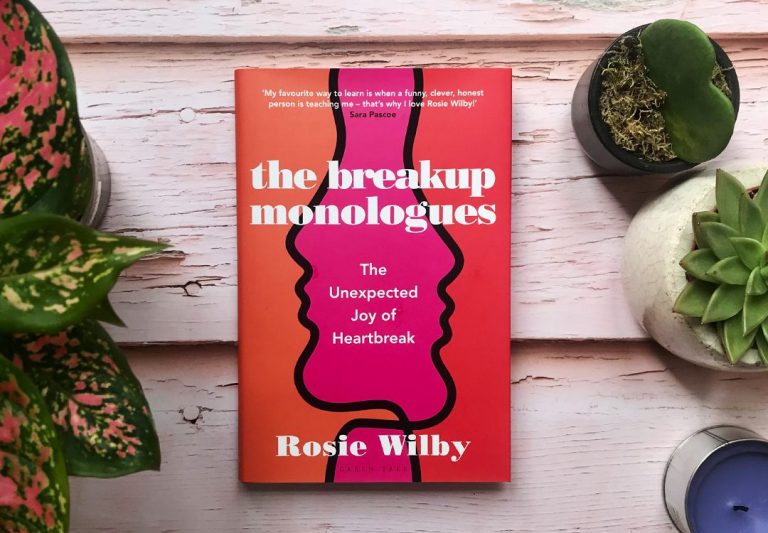 There’s something intriguing about the collection of human emotions and behaviours that come to play when reacting to heartbreak. A long tradition of white cis-het media culture has deemed most of them as hurtful feelings to be avoided, especially for women. But Rosie Wilby disagrees and in The Breakup Monologues: The Unexpected Joy of Heartbreak offers a fresh approach to the intricacies of dating and failed relationships.

Borrowing its title from the author’s own comedy podcast, The Breakup Monologues was inspired by Wilby’s career as a comedian and performer, sharing love and separation stories on stage. Wilby draws from personal experience and borrows heartbreak anecdotes and wisdom from friends to put together this witty catalogue of failed romances. Her recipe blends acid humour, feminism and scientific evidence to teach about the aftermath of heartbreak, useful lessons and reflections about navigating romantic life.

The voice in this book is charming. Sometimes too quotidian, sometimes vulnerable, but always friendly. The book is structured in short chapters with each very different from the last. While some chapters gossip about the relationships of friends and acquaintances, and even celebrity couples (like Gwyneth Paltrow and Chris Martin ‘conscious uncoupling’ story), most narrate Wilby’s own story in a somewhat disordered timeline, using her current relationship with the generically-dubbed ‘Girlfriend’ as a time reference. Chapters are marked ‘1 month A.G. (After Girlfriend)’ or ‘1 year B.G. (Before Girlfriend)’ and so on, but they don’t follow any apparent order. The lack of a clear structure might confuse readers used to a linear storyline, but considering the author’s background as a stand-up performer, this comedic style of rambling seems fitting. For me, Wilby’s jumbled retellings made it easier to hear her authentic voice and energy bursting through the book’s pages.

Throughout the book, Wilby shines a light on what worked and didn’t work in her previous relationships, recalling past emotions and topping them up with today’s wisdom of hindsight. She puts a strong focus on the act of breaking up itself. On one occasion, Wilby humorously recalls being dumped via email by a bisexual woman she had briefly dated: “Apparently, I’m getting a bit intense after just two dates, and she isn’t entirely comfortable. I guess she’s used to dating men. Maybe they are really offhand and noncommittal for the first few weeks. Two lesbians, on the other hand, would have already moved in together and got a cat by the second date.”

Wilby’s lessons on modern etiquette and lexicon of today’s breakups is also comical. “Ghosting spin-offs include a friendlier alternative,” she writes, “‘caspering’, where you let them down gently before disappearing. Or there’s ‘submarining’, where you suddenly decide to resurface a little while later. Or even ‘orbiting’, where you screen out their calls but continue to view and like their social media photos.”

Wilby creates a comfortable space for readers to relate and feel vulnerable in their own dating experiences. At the same time, she avoids dramatising and uses witty metaphors and puns, including offering an alternative to “butterflies in the stomach” with “the moths of doom”, adding comic relief to the pain of failed romance.

Wilby is undoubtedly funny and manages to find a soothing balance between lighthearted philosophy and inevitable pain. There are some cases, however, where one thinks the puns and style of humour would be better understood in a live performance.

From a feminist angle, she offers a very healthy perspective on breakups. She celebrates love and relationships, but also explores the layers of breakups and singledom as an opportunity for personal growth. Wilby reflects:

Without all my bad breakups,without all the times I waited around Agoraphobic Ex-Girlfriend, without all the times I wondered if Secretive Ex-Girlfriend was telling me the whole truth, without the myriad uncomfortable feelings that I didn’t want, I wouldn’t be in a position to know what I do want. I wouldn’t be in a position to make this better choice. None of those relationships were supposed to last forever, but a combination of them has brought me here. Far from being failures at love, they might have been successes at learning.

The notion of harnessing breakups for individual development and self-care is not new, but it’s always a very empowering reminder that I gladly welcome.

Something else I enjoyed in this book is the lack of male protagonism. This is, of course, because most (if not all) of Wilby’s dating stories are with other women, but it’s still very refreshing to encounter a book about relationships, a genre massively reigned over by heteronormative conventions, where men are little involved and not taking up any significant space.

In her conclusions, Wilby insists that by sharing our heartbreak stories, we can comfort each other “soothe one another, eat chocolate, dance, exercise and laugh together”, encouraging readers to heal in solidarity. As becomes palpable throughout the book, Wilby has not excelled at breakup recoveries, and it is this genuine will to make breakups better for herself and others which makes The Breakup Monologues a charming book for those who identify as having a broken heart but don’t want to take themselves too seriously.

Wilby will be recording a live episode of her podcast The Breakup Monologues on 3 September at London Podcast Festival.

The Breakup Monologues is published by Bloomsbury and available for purchase here.

The first image shows The Breakup Monologues on a wooden table surrounded by plants. The cover is shades of pink, orange and red and shows a black outline of the profiles of two faces. The second image shows author Rosie Wilby on stage. She is wearing a black leather jacket, standing before a microphone and looking directly into the camera smiling. There are gold streamers in the background. Both images used with permission from Rosie Wilby.