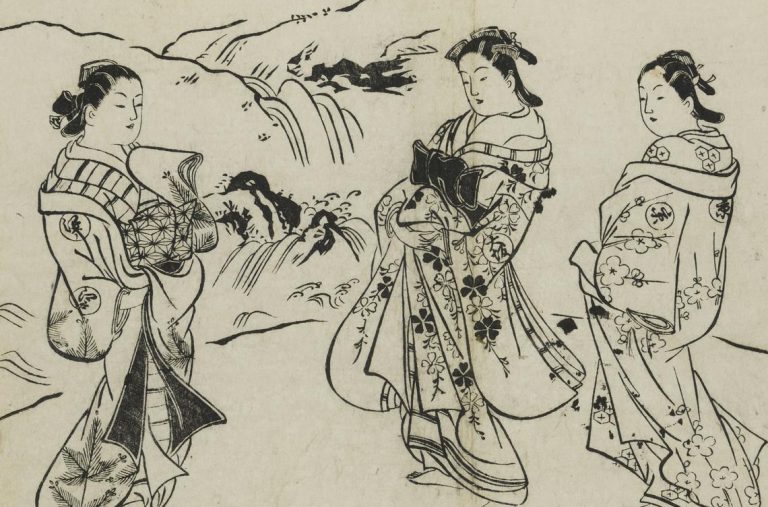 In this age, the term ‘sex work’ is multi-layered. From running accounts on OnlyFans and Seeking Arrangements to working red light districts and massage parlours, the sex industry is diverse and ever-evolving, without one definition. Sex historian Dr Kate Lister, author of A Curious History of Sex, encapsulates this evolution in her new book, Harlots, Whores & Hackabouts: A History of Sex for Sale. Offering a chronological and global journey through the history of sex work, Lister highlights how attitudes towards that industry have formed, distorted, plateaued and potentially grown over thousands of years.

I had a chance to catch up with her ahead of publication to discuss her research process and hopes for the types of conversations this book will provoke.

It seems right to start with discussing the cover image, which is stunning, by the way. How did you select it?
This image was sourced from a vintage French postcard. It’s a strong image for sure. I like that she’s sitting on his knee, slightly elevated. She looks like she’s in a position of power. But choosing a cover was a really difficult task, because which image would you choose? There’s no denying that the glamorous French escort culture was part of this history, but it’s not all of it. There are some really harrowing images in the book, like the images of the French sex workers after the war with their heads shaven to bear swastikas. It was hard to know what to show on the cover because I wanted people to notice the book but not be put off from reading it.

As you’ve just mentioned, the history of selling sex is complex and varying. What story did you want the book to tell?
When people talk about sex work and selling sex it’s usually very polarising. It’s either focusing on the horrendously exploitative, abusive side with trafficking and drug addiction, or it’s [treated as] super glamorous. The truth is it’s a complex history and such a complex experience. There is no ‘one story’, so I didn’t want to tell just one.

So is the title, Harlots, Whores & Hackabouts meant to highlight this complexity?
The naming of the book was complicated too. The publisher and I went back and forth trying to land on a title. Then finally there was this brilliant idea to call it Tales from Gropec*nt Lane. I was convinced I’d landed on a winner there. But then we got a hard no from higher up. But it’s in those kinds of moments you need to trust the publisher, and they know more than I do about marketing. The most important thing is that the book and the history are out there.

What keeps drawing you back to the history of sex and sex work as an academic specialisation?
For me, you can tell so much about a period of time and society of people by how they’ve treated the people selling sex. Because the sex worker is the most visible symbol of ‘sex for fun’ throughout history. So what is projected onto that person tells me so much about a culture and I’ve always read it that way – whether […] cultures that have cast them as victims or cultures that punish and harm sex workers. Another thing is that it’s a very living history. It’s not a dead history. It doesn’t matter if you go back to medieval London or ancient Greece or modern-day Japan; it hasn’t changed that much. And you can see the legacy of what we’re still doing today through its history.

Their voices have always been mediated, whether it be by pornographers or the police or well-meaning academics like myself. But we can finally listen to them

What do you hope to be the most important message to learn from this history?
I would hope that highlighting the elements of trauma and damage [that have] been meted out to sex workers will force the question: “Why are we still doing this?” but without being too obvious about it. The sex workers have always been here, but they’ve always been spoken for. Their voices have always been mediated, whether it be by pornographers or the police or well-meaning academics like myself. But we can finally listen to them. And now they can speak for themselves. I wanted the last chapter to say: “We are in such a fortunate position now; it’s never happened before where the sex workers can speak for themselves. So let’s listen to them.”

So with that in mind, going forward will you be working on projects or research focusing on sex work in the 21st century?
I think after a certain point you have to let the sex workers speak for themselves, otherwise you become part of the problem. One thing I’m passionate about is using history as a form of activism. I really want it to be useful in the debates and climate going forward and I hope it is. I’m on the board of the Sex Work Research Hub, which is a board of international sex work academics. They do amazing work. I think they’d be the ones producing research on what’s going on at the moment. But far more importantly than that, you don’t want to take space away from people who can speak for themselves.

Speaking of the research process, how do you go about sourcing all the information and resources for such an extensive (and backdated and long) history?
Well one of my biggest issues was that I was adamant it wouldn’t be western white history only. There are chapters on [the] history of sex work in China and Japan, but I don’t speak the languages. So that was an obstacle. It meant I was reliant on existing research, but because of Covid-19, libraries and archives weren’t open for the longest time. A lot of academic research is about knowing the key words you need to look for. For example, I knew that I couldn’t look up the word ‘sex worker’ in Victorian archives because I wouldn’t find anything. And if you look up ‘prostitute’ you would find a lot but not everything. Because they also used terms like ‘fallen woman’ or ‘great social evil’ or loads of other euphemistic stuff. So the key is finding out how your subject was discussed at that point in time. Identifying the key words is the crucial step. There’s reading between the lines too. A lot of the time, Victorian newspapers would report on ‘single women’ and that could often mean sex workers too, but it could also not, so then you’d have to use that research to lead you to other research.

While we’re discussing how sex workers have been described throughout history, your first chapter on the earliest records from ancient periods almost presents sex workers as magical and mythical: almost godlike. What do you think happened to distort this idea into something more sinister and harrowing?
We wouldn’t understand early attitudes towards sex work, because we’re still doing it from our understanding now. So if we’re trying to look at sacred prostitution from those periods, we’re already approaching it with our views now. But I have a suspicion that it’s always to do with money. Historically, we are very forgiving of very high-class, wealthy people selling sex. If you land a really rich client then you are a courtesan, not a prostitute. It’s always the poorest people doing it who are subject to discrimination and are attacked by the law as well. I guess the purpose of that chapter is to disrupt what we believe to be an idea of prostitution now.

Harlots, Whores & Hackabouts: A History of Sex for Sale is now on sale, published by Thames & Hudson.