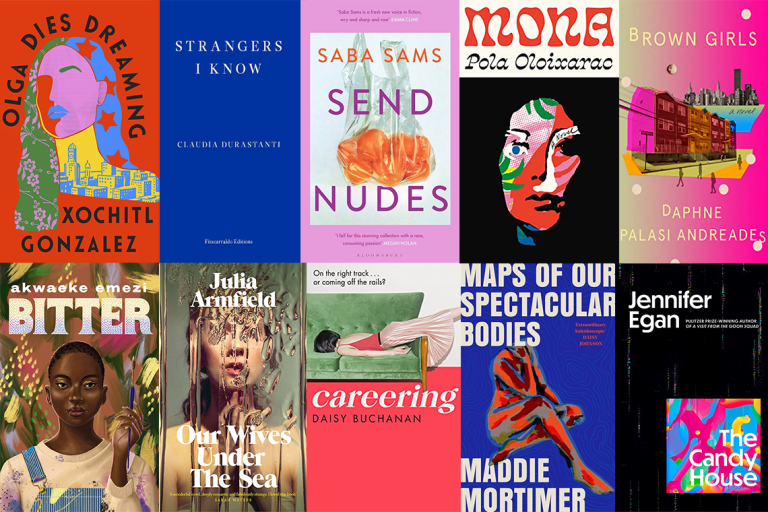 Strangers I Know by Claudia Duranstanti (19 January, Fitzcarraldo)
Another debut, Duranstanti’s novel is about being a stranger in your own family and life. Claudia’s mother says she met her husband when she stopped him from jumping off a bridge. Her father says it happened when he saved her from an attempted robbery. Both parents couldn’t be more different; they can’t even agree on how they met, much less who needed saving, leaving the unnamed protagonist marred by a lifetime of miscommunication, mystery and myth.

Mona by Pola Oloixarac (3 February, Serpent’s Tail)
Yet another debut for the list, Oloixarac’s engaging and challenging novel Mona, translated by Adam Morris, adds eccentric, intersectional feminist despair to Argentina’s literary tradition. The titular character – sardonic, intellectual, and a connoisseur of marijuana and prescription pills – is a rising star on the Latin American literary scene who seeks opportunities to break free from the international establishment that exploits her for the tick-box diversity her presence on campus allows.

Love Marriage by Monica Ali (3 February, Virago)
Love Marriage – from the bestselling, Booker Prize-shortlisted author of Brick Lane – is a powerful, human story of two families from different cultures trying to understand each other.

Bitter by Akwaeke Emezi (15 February, Faber)
A student at a special school called Eucalyptus, Bitter focuses on her painting surrounded by other creative teens. But outside this haven, the streets are filled with protests against the deep injustices that grip the town of Lucille. From the critically acclaimed author of Pet and The Death of Vivek Oji, Bitter, takes a timely and provocative look at the power of youth and the importance and cost of social revolution.

Our Wives Under The Sea by Julia Armfield (3 March, Picador)
From the critically acclaimed author of short story collection Salt Slow comes Our Wives Under The Sea. This debut novel is a story of the relationship between two women transformed by the discovery of a mysterious underwater vessel.

These Days by Lucy Caldwell (3 March, Faber)
Set in Belfast in 1941, These Days follows two sisters over the course of four nights as they try to survive the horrors of the Belfast Blitz. A timeless and heart-breaking novel about living under duress, about family, and about how we try to stay true to ourselves.

Glory by NoViolet Bulawayo (8 March, Chatto & Windus)
Inspired by the downfall of Zimbabwe’s long-serving president Robert Mugabe in 2017, Glory centres around a fictional country inhabited by animals, the unexpected fall of a long-serving leader and the ensuing drama which leads to liberation. An energetic, exhilarating novel from Booker-shortlisted Bulawayo.

Careering by Daisy Buchanan (10 March, Sphere)
There’s a fine line between on the right track and coming off the rails. Hilarious and honest, Careering is a dark comedy which takes a look at the often toxic relationship working women have with their dream jobs.

Maps Of Our Spectacular Bodies by Maddie Mortimer (31 March, Picador)
Maps of Our Spectacular Bodies is about a family coming to terms with the unthinkable: the death of a mother. Lia’s cancer has returned, and in the last months of her life, she is determined to keep the landscapes of her past, her present and her body separate. A heartbreaking yet darkly funny debut.

The Opposite of a Person by Lieke Marsman (28 April, Daunt)
When Ida, a Dutch climatologist, accepts an internship at a climate research institute in the Italian Alps, it means leaving her girlfriend Robin behind in Amsterdam. Ida finds herself grappling with love, loneliness and her place in a society unwilling to confront global warming. An unflinchingly honest narrative of vulnerability, longing and introspection is disrupted by essays and poems, creating an incisive, witty and devastatingly smart portrait of how we live now.

The Candy House by Jennifer Egan (28 April, Corsair)
Featuring familiar characters from Egan’s acclaimed A Visit from the Goon Squad comes The Candy House, an electrifying, deeply moving novel about the quest for authenticity, privacy, and meaning in a world where our memories are no longer our own.

People Person by Candice Carty-Williams (28 April, Orion)
Dimple Pennington is thirty years old, stationary and alone but for her social media presence, when a dramatic event brings her half siblings crashing into her life. The author of the beloved and bestselling Queenie returns with another winning combination of laugh-out-loud humour and exquisite character-led drama.

IMAGE DESCRIPTION: The image shows ten of the eighteen books listed in the order they appear. Clockwise from top left: 1) the outline of a woman’s face and hair on a red background, the face, hair and neck are filled with abstract patterns in bold colours of stars, flowers, and an illustrated cityscape; 2) the title and writers’ name in serif font on a royal blue background; 3) a white square inset on a light pink background showing the image of oranges in a clear plastic bag, the title is laid on top in pink capitals; 4) a woman’s face on a black background filled with block colours and patterns; 5) graphic images of buildings on a pink background; 6) illustration of a black woman wearing dungarees and holding a paintbrush, against a painted background; 7) a woman’s face obscured by running water on glass with the title and author’s name overlaid in white; 8) an illustration of a woman lying face down on a green sofa on a red carpet; 9) drawing of a nuder in bold reds on a purple background with the title and author’s name overlaid in white; 10) a black background with a small colourful square in the bottom right corner containing the title in white font.