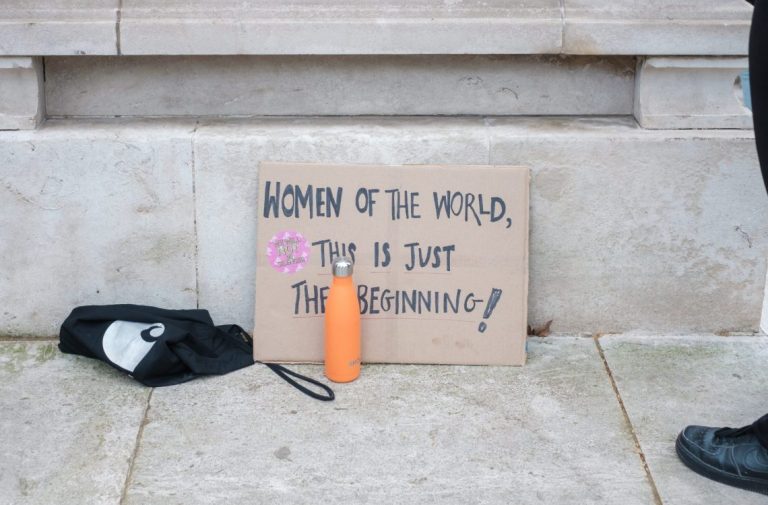 We’ve got a selection of the most interesting articles from the last seven days to share with you, hand-picked by The F-Word team, including a selection of articles on ideas and resources to help you celebrate Women’s History Month.

We’ve added content notes where possible, but some of the links may contain upsetting information so please click with caution. If you think we’ve missed any important articles or issues from the past week, let us know in the comments. We welcome debate in the comments section and on social media, but comments containing sexist, racist, homophobic, classist, transphobic, disablist or anti-sex-worker language will be deleted.

As always, linking to articles doesn’t equal endorsement from The F-Word.

The Ms. guide to celebrating Women’s History Month 2022 (Ms. Magazine)
From the article: “Though many of us are still physically isolated due to the COVID-19 pandemic, virtual events are keeping us connected all month long. Through panel conversations, film screenings, online art exhibits and more, it’s easier than ever to interact with like-minded speakers from all corners of the world—including activists, poet laureates, ambassadors and artists.”

Kanye West’s harassment of Kim Kardashian is not a joke (Hanna Phifer, Elle)
[CN: harassment, coercion]
From the article: “Kardashian is a woman of great means and wealth, which leads people to believe that she isn’t in the imminent danger that women of far less fortune are. Be that as it may, the passive and active enabling of West’s behavior sends a signal not only to Kardashian but also victims of this type of harassment, or even more serious abuse, that what they’re experiencing is not to be taken seriously.”

The decline of the girlboss? Post-pandemic, she’s more ubiquitous than ever (Rhiannon Lucy Cosslett, The Guardian)
From the article: “Despite claims that the pandemic has led to the decline of the girlboss, in fact what we are seeing is the opposite: confidence culture and its mantras only seem to be strengthening. Gill and Orgad noted, as a depressing example, an article in the Boston Globe which encourages women to not feel guilt at dropping out of the workforce because of the pandemic – rather than confronting the structural reasons they’ve been forced to.”

Wellness is not women’s friend. It’s a distraction from what really ails us (Kate Seers and Rachel Hogg, The Conversation)
From the article: “Wellness is an industry. It’s also a seductive distraction from what’s really impacting women’s lives. It glosses over the structural issues undermining women’s well-being. These issues cannot be fixed by drinking a turmeric latte or #livingyourbestlife.”

Angela Davis on the power of protest: ‘We can’t do anything without optimism’ (Simon Hattenstone, The Guardian)
From the article: “Davis is no stranger to splits on the radical left or factional feminism. She has seen it all her life, and regretted it all her life. She doesn’t understand why some feminists today see trans women as a threat. “There are some feminist formations that are very opposed to the trans presence, and that is so backwards. Those of us who are more flexible argue that if you want to get rid of violence directed against individuals in the world, whether it’s racist violence or gender violence, you have to support Black trans women who are the target of more violence than any other group of people.”

Performative social media activism doesn’t help Ukraine (Stacia Datskovska, Bitch Media)
From the article: “Sharing videos of whole buildings going up in flames or little children crying while planes flew overhead, barely missing their homes, is not “action.” It’s an immediate reaction—the tap of a button on a phone that seemingly signifies to the world, I am aware this is going on right now. I care! but does very little.”

The racial bias in western media’s Ukraine coverage is shameful (Nadine White, The Independent)
From the article: “Now, because of the Ukrainians’ whiteness and proximity to the west, it’s apparently difficult for some political commentators and roving reporters to grasp how this conflict could have come to pass. It’s as though bloodshed and invasion is only to be foisted upon countries inhabited by Black and brown people – and some have had no qualms about sharing their sense of alarm regarding this sobering turn of events, perhaps unaware of how this feeds into white supremacist ideology which renders the lives of others of no value.”

Ukrainian Eurovision winner recounts ‘terrifying’ ordeal after fleeing Kyiv with her young children (Emily Chudy, PinkNews)
From the article: “No matter how many warnings we have heard about how war could start, we could have never believed that something so horrible could happen. In the centre of Europe. In the 21st century.”

Ukrainian women’s ‘lives at risk’ by giving birth in bomb shelters with lack of equipment (Maya Oppenheim, The Independent)
From the article: “Caroline Hickson, regional director for International Planned Parenthood Federation, told The Independent the situation for pregnant women in Ukraine under Russia’s attack is ‘appalling’ as she warned ‘babies don’t stop and periods don’t go’ in conflict situations.”

Latin American street art reflects protest and hope for Black and Indigenous women (Marjua Estevez, Refinery29)
From the article: “From Haiti to Brazil to Puerto Rico, street muralists are scaling the faces and narratives of Black and Indigenous women in climates seething with growing femicide rates, reproductive injustice, and gender pay gaps that disproportionately distress these communities. For them, street walls are where they speak to women’s plights, celebrate community leaders, and imagine a new reality.”

Sentenced for a selfie: Middle East police target LGBTQ+ phones (Maya Gebeily and Avi Asher-Schapiro, Thomas Reuters Foundation)
From the article: “Around the world, marginalised communities are worried the internet is no longer a safe space for them as surveillance grows and hate speech goes unchecked. An in-depth study of court files published on Monday found police forces in Tunisia, Egypt, and Lebanon are increasingly relying on digital tools to identify, entrap and prosecute LGBTQ+ people – thus “intensifying anti-queer surveillance”.”

Imbokodo is a long overdue series of children’s books on South African women (Xolisa Guzula and Athambile Masola, The Conversation)
From the article: “A new series of books called Imbokodo: Women Who Shape Us explores the neglected histories of South African women. Geared at younger readers, there are three books in the series: 10 Extraordinary Leaders, Activists & Protesters; 10 Inspiring Singers, Writers & Artists; and 10 Curious Inventors, Healers & Educators.”

These short Netflix docs prove that Britain is not boring (Kofo Ajala, gal-dem)

Systems thinking can help end practices that harm women worldwide (Margo Day, TechCrunch)
From the article: “The key to solving many of the world’s biggest problems isn’t by tackling them individually – it’s by approaching them with an interconnected mindset, because the biggest issues don’t exist independently of other problems.“

Women’s History Month: 5 groundbreaking researchers who mapped the ocean floor, tested atomic theories, vanquished malaria and more (Maggie Villiger, The Conversation)
From the article: “Behind some of the most fascinating scientific discoveries and innovations are women whose names might not be familiar but whose stories are worth knowing.“

‘When I surf I feel so strong’: Sri Lankan women’s quiet surfing revolution (Hannah Ellis-Petersen, The Guardian)
From the article: “‘When I surf, it is such a happy feeling for me,’ she said. ‘I am filled with this energy, I feel so strong. Life is full of all these headaches and problems, but as soon as I get into the water, I forget about it all.’”

‘I just want to be competitive again’: Trans cyclist Emily Bridges on preparing to race in the female category (David Bradford, Cycling Weekly)
From the article: “‘These people tend to talk about factors like height, which change very little with hormone therapy,’ she says. ‘Yes, I’m quite tall [6ft 2in], but cycling performance is not height-dependent – some of the best riders are quite short. In longer, more mountainous races, being tall is a disadvantage, as you’re just carrying more weight.’ Bridges highlights that cycling’s key metric is power-to-weight, with the aim for most riders being to minimise bulk while maximising aerobic capacity. ‘I’m now trying to power a bigger frame [relative to others] but with a much reduced engine.'”