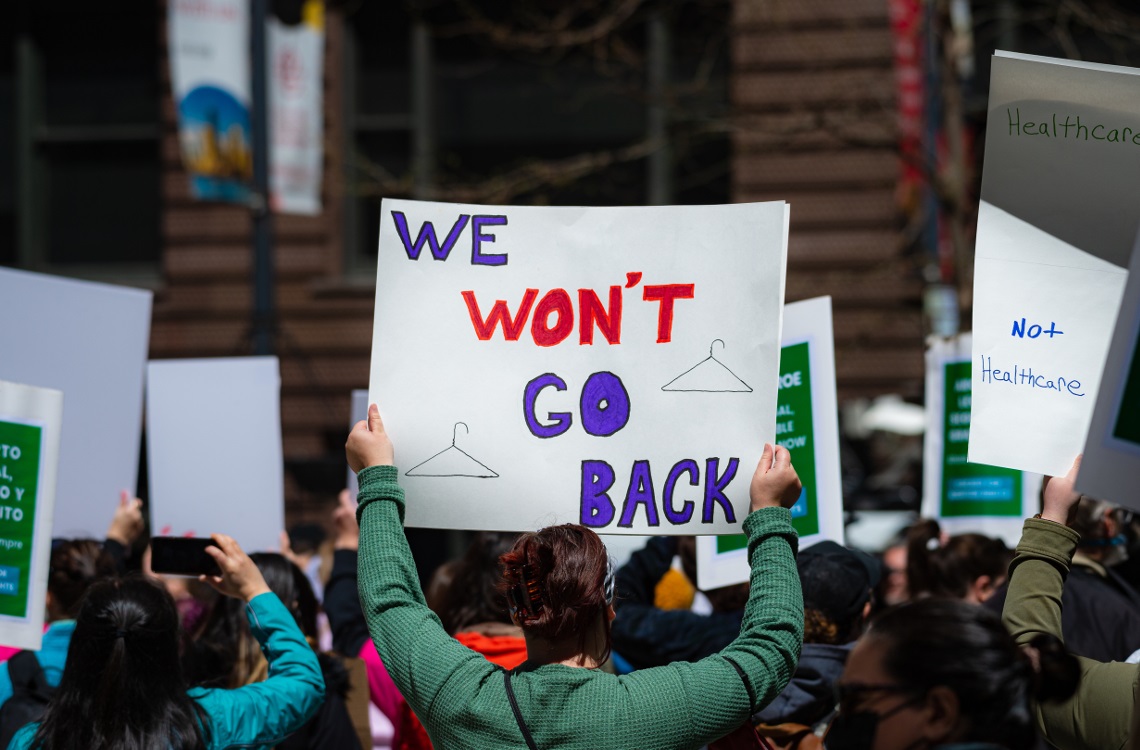 Abortion is a universal right, and no one is less deserving

Last Friday, the people of the United States lost their federal rights to abortion. By a margin of six to three, the Supreme Court voted to overturn Roe v Wade, the 1973 ruling that guaranteed access to abortion care nationwide, making it possible for individual states to protect, restrict or ban access as they see fit.

While expected, this decision is devastating, and for many of us the implications are still sinking in. As of 27 June, abortion is now illegal in eight states, with another ten set to ban or severely restrict access to abortions soon and a further twelve under threat. The criminal penalties for performing or helping with an abortion post-Roe vary widely by state, with a range of fines and prison sentences starting at six months set to be enforced across the country. At the extreme end of the spectrum is Texas, where anyone who successfully terminates a pregnancy will be guilty of a first-degree felony, carrying a maximum sentence of life imprisonment.

There are currently no abortion bans that attempt to prosecute women for travelling out of state, but the added cost of doing so will make abortion inaccessible to many, particularly those who are very young or come from disadvantaged backgrounds. There are fears that travel may become even more difficult in the future, with some states having (so far unsuccessfully) weighed legislation that would allow individuals who help a patient to cross state lines for an abortion to be sued.

Pregnant people who do not wish to be parents will now face a choice: undergo pregnancy, and delivery – with either many years of caregiving or an emotionally strenuous adoption process, regardless of the permanent impact this might have on their bodies, minds, financial security and aspirations – or risk prosecution. This really isn’t a choice at all.

Many have pointed out how especially horrific this will be for survivors of rape and incest. None of the bans imposed in Alabama, Arkansas, Kentucky, Louisiana, Missouri, Oklahoma, South Dakota, Tennessee and Texas have exceptions for these cases, and, pending a legal challenge, Florida may soon join that list. While Idaho, Mississippi and Utah do allow abortion care for rape or incest survivors, this exemption rests on the condition that a police report has been filed – something the majority of sexual assault survivors do not do. Other states have not specified how abortion providers are expected to determine the validity of survivor’s claims, meaning many will be reluctant to provide care for fear of falling on the wrong side of the law.

This is horrific. I’m appalled to live in a world where victims will be forced to deliver their rapists’ babies. The fact that there are people who believe terminating a foetus to be as big a tragedy as the trauma this will cause, and the fact that these people hold authority over large swathes of the US, is nightmarish. However, we must be careful about centring traumatic cases when criticising the overturning of Roe v Wade, as this narrative can inadvertently undermine the point that abortion should be a universal right, by implying that people who get pregnant due to their own mistakes are in some way less deserving.

Pro-life people may claim that they are defending the rights to life of unborn children, but their politics are typically much more about the sexual control of women than they openly admit (regardless of the fact this will also impact trans men and some intersex and non-binary people). You do not have to dive far into a Twitter thread or comment section related to abortion in order to find pro-lifers claiming that women who have sex need to own up to the consequences of their actions, or that women who do not want to be parents should simply not ‘act like sluts’.

They see carrying, delivering and being responsible for a child as a legal and moral duty – and perhaps a just punishment – for women who choose to have premarital sex, all without passing any judgement on or demanding any consequences for the men these women are having sex with. Rhetoric like this is symptomatic of society in which separation of church and state exists only in name, and a warped manifestation of Christianity holds significant sway over political thought.

While we should absolutely be defending the rights of sexual assault survivors to receive adequate care, finding exceptions within this sex-shaming logic by pointing out that some pregnant people did not choose to have sex does nothing to challenge the belief that a woman having sex outside of marriage is inherently immoral. Someone whose contraception fails while engaging in consensual sex is equally entitled to terminate their pregnancy as someone who has been raped, as is someone who – for whatever reason – chose not to use contraception at all.

Abortion is a right, and is not something that should only be afforded to those whose pregnancy is not deemed to be their fault. Abortion access should be unconditional. Someone’s body should not have to be violated before we grant them the right to choose what happens to it moving forward. Forcing someone to carry and deliver a baby when they do not want to is a traumatic experience in and of itself; it is an infringement of bodily autonomy, and it is a form of violence.

The featured image is by SHYCITYNikon and is taken from the Rally for Abortion Rights and march through downtown Chicago on 7 May, 2022. This shows a back view of protestors, with the largest visible placard (in the middle) showing the words ‘WON’T GO BACK’ and drawings of coat hangers, while a smaller visible placard shows ‘Not Healthcare’. The image is shared under an Attribution-NonCommercial 2.0 Generic Creative Commons license.