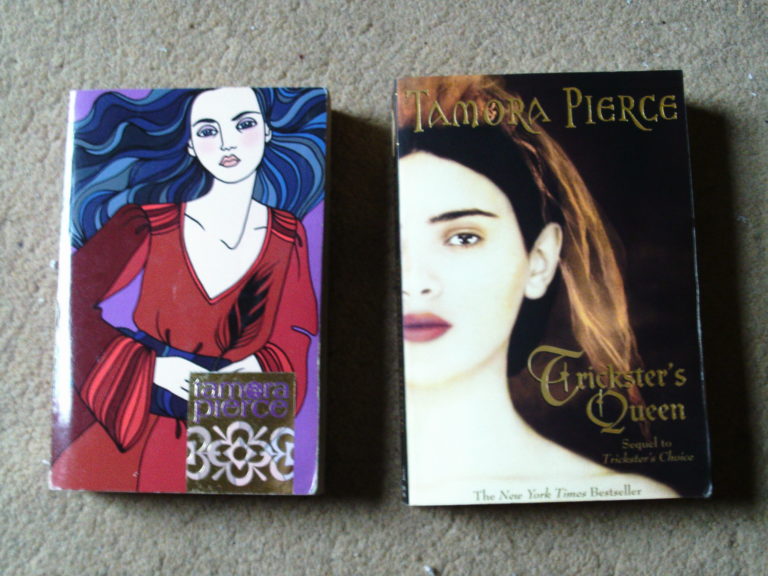 Tamora Pierce’s debut fantasy novel, Alanna: The First Adventure, was first published in 1983, it told the story of Alanna of Trebond, a daughter of a scholarly noble, whose fate was ordained to be that of many a mediaeval damsel: she was to be sent away to a convent in order to be taught how to be a lady in preparation for presentation at the Royal Court and, ultimately, to make a good marriage. Had this been the plot, rather than the catalyst, for Pierce’s novel, it’s unlikely that her debut would have brought her so many fans. As it was, Pierce’s heroine was emphatic from the outset that she didn’t want to be trained as a lady and groomed for the marriage market and, seeing as how her twin brother, Thom, was similarly unenthralled with the future planned for him as a knight of the realm, they traded places, meaning that he went (undisguised) to the cloisters in order to learn sorcery, while she disguised herself as a boy, and trained at the Royal Palace to be a knight. The rest, as they say, was history, and heroic fantasy was given its first Angry Young Woman.

Over the past twenty-three years, Pierce has built up a strong fanbase for her teenage/ young adult fantasy series’, both internationally, but particularly in her home country, America. Her fast paced, vivid fantasy narratives, with their complex characters and strong heroines have taken on a slightly darker tone in recent years, as have the works of Terry Pratchett and J.K Rowling, all of whom – to varying degrees – have recently engaged with themes of war, racism and racial conflict, the nature of evil, and the consequences of history. In Trickster’s Choice and Trickster’s Queen, Pierce adds another often uncomfortable theme to the list: Colonialism, and its long term consequences.

The Trickster books, of which there are two rather than Pierce’s usual four, (publishing houses around the world having, at last, recognised that teenagers will read books that are longer than 200 pages) take place in Tortall, and are the fourth of Pierce’s series’ to be set there. The central concern of the Tortall books, when taken as a group, is that of the girl/woman in a boys/mans world. Pierce’s heroines, whether Alanna, Daine in the Immortals series, or Kel in the Protector of the small series, are all competing for very high stakes, with the added pressure of what failure will mean: losing everything. If we include the two series’ not set in Tortall, The Circle of magic and The Circle Opens, her heroines and heroes can all be read as being outsiders. They are all, in one respect or another, outside the norm.

Alianne of Pirates Swoop, the heroine of the Trickster books, at first glance appears to turn this approach on its head: Whereas the earlier Tortall heroines (mentioned above) started out as outsiders who had to fight in order to be accepted, and who had secrets and aspects of their pasts that they needed to face in order to achieve a sense of victory and sense of self completion, Alianne’s story begins by showing us a seemingly happy, privileged, integrated, confident sixteen year old girl, at home with herself and those around her. Ironically, it is this comfort, privilege and integration that sew the seeds for her dissatisfaction, and which in turn allows the plot to unfold. For Alianne (Aly for short) is the daughter of unconventional parents: Her mother is Alanna of Trebond, now the King’s Champion and first female knight of Tortall in over a century, and her father is George Cooper, former King of Thieves, now the second in command to Tortall’s spymaster, and covert head of Tortall’s spy network, and as Aly tells their servants, being the daughter of legend is, she finds, “a great deal like work.”

Her mother, she feels, doesn’t understand her, whereas her father does, but is protective of her. Unfortunately, whilst both parents wish that Aly would pull herself together and do something useful with her life, neither parent is impressed when Aly tells them that she wishes to be a spy. Despite her obvious aptitude for the profession, both ban her outright from pursuing it as a career and, feeling decidedly miffed, Aly decides to leave home for a bit and return when they’ve both calmed down. Unfortunately, whilst out sailing, she is captured by pirates from the Copper Islands, and is sold into slavery. She will need all her skills and resources to survive, especially if she ever wants to go home again.

she will need all her skills and resources to survive

In the Copper Islands, Aly is taken in by the Balitangs, a family of mixed race and white nobility, who are on the outs with the increasingly unhinged and unstable Islands monarchy. She learns the history of the luarin (white) conquest in the Copper Islands, and the history of the Raka, the copper/brown skinned natives of the Islands. Early on, she makes a deal with the Trickster god, Kypriath, who promises to send her safely home to Pirates Swoop if she can keep the Balitang children safe throughout the summer.

By the second book, Trickster’s Queen, Aly has kept her side of the bargain, but remains in the Copper Islands by her own choice. The stakes are higher than ever: not only must she keep the Balitangs, newly returned from exile to the nations capital, safe, she must also oversee a network of spies, acting as the spymaster for the Raka rebellion, as well as overseeing the destiny of the Raka royal house – Sarai and Dove Balitang.

Whilst Aly is a precocious, worldly heroine, cynical, and with skills beyond her years, it’s important that Pierce shows her young heroine making mistakes, falling in love, but never losing sight of the battles ahead. It’s also important that Pierce doesn’t pull any punches when describing the impending rebellion and inevitable revolution. She reveals all too clearly the ways in which the luarin monarchy are not afraid to weasal, bargain, and kill in order to stay in power, whilst also demonstrating that those seeking to overthrow them will do everything in their power to succeed, and to place a Raka queen on the throne, regardless of the human cost. Pierce not only reveals these truths in unflinching, often shocking, detail, she also makes it clear that Aly herself is struggling with her conscience, even as she knows, ultimately, what will happen, and that many innocent people will die.

the politics of the novels have a contemporary resonance

Because the struggle at the heart of the Copper Islands is essentially a colonial struggle, the politics of the novels have a contemporary resonance as well as the historical resonance that Pierce outlines in her Notes and Acknowledgements at the end of Trickster’s Queen. It is probable that Pierce is aware of this resonance, but she has chosen to play it down.

Less played down is the feminist aspect of the story, with Pierce revealing, mainly through Aly, Dove and Sarai, the variety of roles and choices available to these three very different young women. Whilst Aly is cunning and precocious, her mission and role becoming increasingly clear to her, Sarai is beautiful, imperious, emotional, and increasingly rash in her actions and behaviour. She does not seem to know what she wants and is, in many ways, one of Pierce’s most problematic heroines, with a strong sense of humanity, but equal weight of anger and self-pity. The quiet, intellectual Dove, like Aly, has incredible strength, resources, and precocious intelligence, and in some respects, she bears relation to the young Maura of Dunlath from Wolf Speaker, the second book in the Immortals series, in that both young women are overshadowed by their older and more beautiful siblings, but must ultimately make their own way in the world.

Of all the characters, Dove’s development is the most subtle and rewarding. The matriarchal nature of the Balitangs in general, and the almost intimidating force of this strength, is also very revealing, and it’s interesting that Pierce’s Trickster heroines are not warriors or sorceresses to any great extent, rather they display a different kind of strength to Pierce’s previous heroines, shifting the emphasis towards a different kind of fantasy heroine.