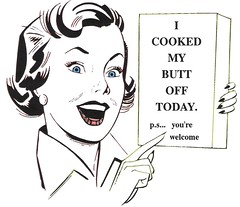 Researchers have calculated that unpaid labour by housewives (and, we must presume, househusbands) is worth an average of £29,771.56 a year, reports the Daily Mail.

They broke down the costs according to the average wages paid to professionals for tasks such as getting children dressed and ready for school, feeding them, helping with homework and getting them ready for bed.

A nanny working the same hours would earn £36.40, based on an average hourly wage of £8.

And adding up the value of tasks that would be carried out by chambermaids, accountants, chefs and mystery shoppers, the study came up with a total of £29,771.56 – several thousand above the national average wage.

I think this is a useful exercise, in that it demonstrates the scale of unpaid labour carried out by women. However, I’m not 100% convinced of the idea of actually setting up some kind of wage system – imagine the problems of having your partner as your boss! I can’t imagine it would be particularly healthy for the relationship.

If the working partner decided that the one that stayed at home had inadequately cleaned the oven, for example, would they withhold wages? How would that further embed ideas about women’s duty to be a sort of domestic goddess? And would it put pressure on women to stay in the home when they don’t necessarily want to (“Why do you want that job when you could be paid for washing my socks?”)

Image from Kimmick, shared under a Creative Commons license