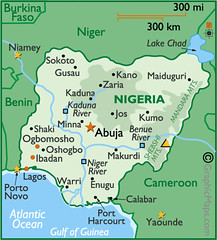 A Nigerian senator has proposed a bill which could see women and men jailed for six months if found guilty of “indecent dressing”, reports AllAfrica.com.

I can’t actually find anything online which sets out what would count as “indecent dressing”, although one Nobel laureate quoted by the Nigerian Tribune suggests that the law could target Indian women wearing saris.

Feminist and women’s organisations in the country are understandably up in arms. The Women Unity Forum and Civil Liberties Organisation put out a joint statement, arguing that the bill “will become a ‘legal’ license and a bulwark for wanton abuses, particularly of women”. They explain:

We recall that in the very recent past, some state governments, including Lagos and some sharia states in the North commenced a campaign of clampdown on women going about their business on allegations that they were indecently dressed. This misguided undertaking led to a harvest of unlawful arrest and detention, and sexual molestation of many women by officials of the Nigerian police and other law enforcement agencies. It took vigorous campaigns and outrage by women and other human rights groups before this madness abated.

Not only this, but the senator who put this forward is chairperson of the committee on women and youth. The NGOs suggest that she should really have some other priorities in mind:

We have the CEDAW Bill, the Bill on Violence against Women, and the Bill on Freedom of Information etc. These bills, if supported with the same zeal and vigour that Senator Ekaette has promised to pursue the frivolous indecent dressing bill, have the potential of addressing not just indecent dressing, but will also give teeth to the anti corruption efforts of the federal government and provide greater guarantees for the respect of women’s human rights, roll back poverty and unemployment and discourage desperation by the youth.

There are some things to take issue with in this joint statement (which throws around terms like “moral decadence” rather freely), but the basic argument is clear.

Another set of local NGOs and the Nigerian Feminist Forum, put out a similar statement:

The Nigerian Feminists Forum is of the view that a Bill on indecent dressing with an attendant jail term of six months for a female offender (bearing in mind that there is a high violence record against female prisoners in our current prisons) is a gross violation on the fundamental human rights of citizens and is not the most effective way to curb moral decadence in the society. This is not the most urgent and critical social problem that confront women and young persons in Nigeria today. It is a ‘non-issue’ taking cognisance of the fact that women and young persons are worst affected by poverty and lack of sustainable development: a major threat to the right to life and a sustainable livelihood.

Image shared by Yodod, under a Creative Commons license