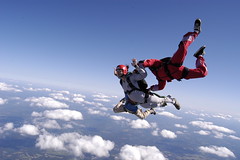 Grandma isn’t like she used to be. Or so reported Joanna Moorhead in a Guardian profile of “skydiving” grandmothers a few days ago.

No previous generation of grandmothers has contained such a high percentage of women who either worked while raising their kids or returned to work when they had grown up. As a result, many of today’s grandmothers are women at the very top of their careers, more likely to be locked in a boardroom or speaking at an international conference than gardening or watching TV. “I know plenty of grandmothers who carry pictures of their grandchildren in their briefcases,” says Curtis. “Women in their 50s and 60s are often at their career peak – but they don’t want to miss out on being a grandmother. It’s like a second chance, and they know how quickly the early years go by, so they’re even more determined to make the most of it. You’d think women wouldn’t want to be grandmothers because of what it meant in terms of growing older, but in fact I think that once their children are old enough, they long for it.”

As you can probably tell from the references to briefcases and jet-setting, Moorhead is only really writing about a particular type of grandmother: she is wealthy and educated, probably middle or upper class, she has had a successful career and independent life. Vibracobra has already pointed out the class element to all of this:

Her interviewees include “Jill Curtis, a psychotherapist, writer, and also a grandmother of seven”, “Writer and broadcaster Miriam Stoppard”, “Julie Cooper, 57” who runs “an events management company, so I might be organising a conference for 500 one day and a fashion show the next.” Meanwhile, “Tanya Hine, 65, is a graphic designer and president of the British Association of Women Entrepreneurs, and her work means she is constantly on the go. ‘I was in Monte Carlo last weekend, I’m off to St Petersburg in March and I’ll be in Florence in April’, she says.” And “Sally Greengross, Baroness Greengross of Notting Hill, has been in the House of Lords since 2000 and is chief executive of the International Longevity Centre. She has a frantic workload, and nine grandchildren ranging from two to 16.” In fact, the person with the most modest occupation is “Linda Price, 55, a former childminder”, but even she has “been all over the world – Mexico, Cuba, the US, Egypt, Africa, Greece and Malta. My husband and I can afford it, so we think, why not? And we often take the grandchildren along.”

This is absolutely true, and it’s so much more of an upbeat and sexy story to talk about the women who are able to live these full lives, than to talk about the vast majority of grandmothers, who face the gender pension gap, society’s disdain for the older woman, perhaps also pressures to take on more childcare and work responsibilities, as well as anything else.

That said, I do agree with cupcate at Dollymix that this should definitely be classed as good thing, and a plus for feminism.

Photo by Andy Ciordia, shared under a Creative Commons license