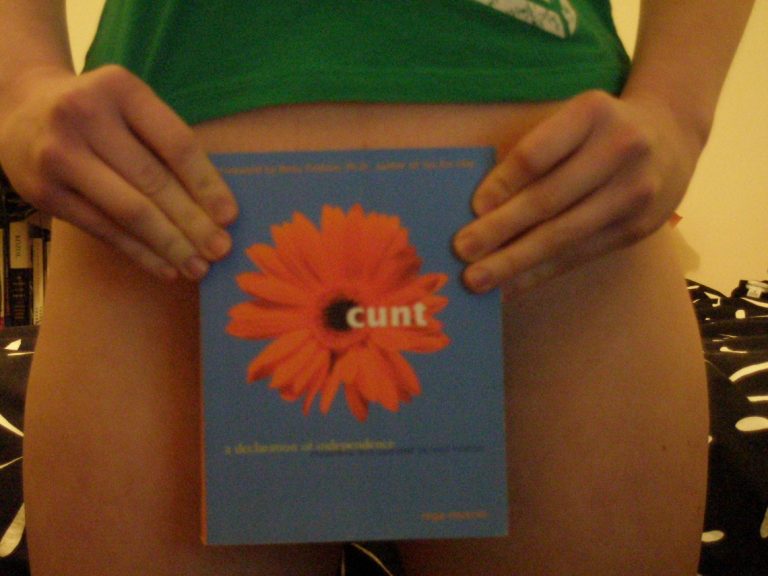 First, a bit of background: Yahoo Answers is a community where users informally ask and answer questions on a range of topics. It can be a bit hit and miss if you need a reliable source of information but is often fascinating if you want to get a feel for public opinion or find out what is generally thought of as established knowledge. It’s also incredibly addictive, with the relationships and health sections readily serving as prime fodder for procrastinating feminists in search of distracting challenges. Admittedly, I wiled away many bittersweet hours during the peak of my own addiction…

Unfortunately, Yahoo’s Customer Care had rather caringly removed the question by the time I hit “submit” so here’s a sample of the answers I had saved:

“C**T is a very offensive word. The other one……not so much.”

“c**t definately!!! havent heard the other one….obviously i can work out the meaning, i just haven’t heard it before…..they are both pretty horrible words to use!”

“The first one i think.”

“Hell, both repulsive. First one worst. Can’t stand that word.”

All the answers so far were from women, as the asker had specifically asked for responses from “ladies.” (Ironically, I’ve found that some of the most interesting results on the site come from provocative questions from possible jokers or trolls who are probably just looking to get a reaction before they -predictably- get reported.) However, I can also say that a male friend of mine wrote on my Facebook wall, after I posted a status update on the matter, to admit he can hardly bear to type the word as “c*nt.” We might be led to believe otherwise but, in my experience, direct words for so-called “lady-bits” tend to make guys squirm too…

How can one word be so powerful? Why is it that the words “prick,” “cock” and “dick” don’t cause nearly as much offence, even when they’re used as insults? I appreciate that some people just hate the way the word “cunt” is used but does that really mean the word itself is bad? And, if so, doesn’t that impact on attitudes towards women’s bodies?

In my view, getting offended by a word for a part of the body that millions of people live with and achieve pleasure from every day just plays into the hands of misogyny.

Photo by JCardinal18, shared under a Creative Commons Licence.