End Patriarchy: For Geeks Only? 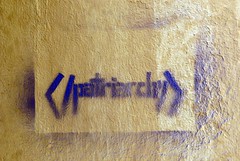 I’m guessing that most of you will be aware of the rather clever End-Patriarchy thing that Jessica Valenti has drawn attention to on Feministing today. I’d also guess that most of you will have got the hook inherent in the format. Time for a confession from me: I didn’t. Well, not fully anyway…

Yeah, I know. As a blogger, HTML commands ought to be ingrained in my brain. And, as a geek of sorts, I ought to have been right on the money with this one. And, yes, our Lynne’s take on the design (see below) meant I had already figured out this most definitely wasn’t some advert for patriarchy and that the code had something to do with that. It’s just that, if I’m honest, I have to admit I did need Jess to remind me exactly what those symbols mean.

I know I’m probably being an old spoilsport. It’s just that the thought of walking around in a T-shirt that could potentially be read as just plain old “Patriarchy” makes me nervous. We already have to contend with accusations that patriarchy is nothing more than a feminist fantasy so wouldn’t this potential misunderstanding be just the sort that anti-feminists would love? Also, isn’t a T-shirt that could alienate feminists who aren’t familiar with HTML just a little bit elitist?

I’m basically looking for some reassurance here because I do really, really want to like these T-shirts and I do think it’s a clever joke (indeed, the very act of wrapping the code around the word quite literally makes it disappear). I’m just not sure if a large enough number of the people we want to reach will get it.