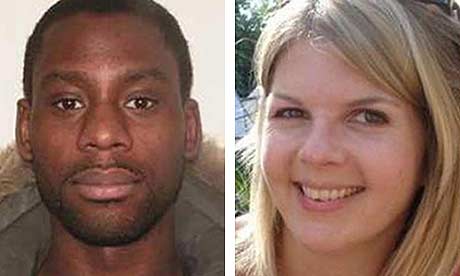 The Guardian reports that Karl Taylor has been convicted of murdering Kate Beagley on their “first date”. I put that in inverted commas because often a friendly relationship is called “dating” in Court and I don’t know whether this was an actual date or not – Taylor and Beagley met in a club and agreed to meet up a few days later but Taylor then claims she was “ignoring” him on the “date”. What isn’t in dispute is that Taylor stabbed Beagely 31 times in the face and neck.

I kid you not that his defence was ” she ran onto my knife 31 times to commit suicide, your honor”, his explanation to the Police was that he stabbed her in self-defence because she was scratching his face (obviously that’s reasonable force). He also stole Beagely’s car and mobile phone and she was found naked so one can only assume what happened between death and Taylor leading Police to her body which he had dumped in Oxhey Woods, north west London. Taylor has admitted to washing the body (to remove evidence we assume) but nothing more.