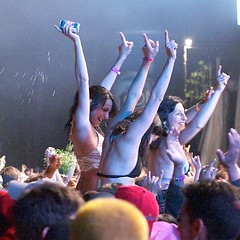 According to AOL music whilst the Spice Girls were about “fun feminism” (I assume as opposed to the un-fun nasty dour sort) we have now entered a phase of music being about male sexual titillation. Now, of course, you could always say that popular music has always been about male titillation – after all Bucks Fizz didn’t have their skirts ripped off in a show of solidarity with other women – but its also reductive to say the whole of music involving female artists can be reduced to the Spice Girls for the 1990s and the Pussycat Dolls for the 2000s.

Whilst the article is suitably critical of the move to hyper-sexualise music in general, it still maintains this highly reductive notion of where women are, and aren’t involved in music.

It’s hard to blame the Pussycat Dolls for marketing their hyper-sexuality. It’s the music industry as a whole that put all their eggs in the old “sex sells” basket. In the last 15 years, rap videos have gone from the ‘hood to the strip club, while Britney Spears’ crotch is considered more newsworthy than her new record.

If you, however, look at the most influential female artists you’ll notice that the Spice Girls only make 191 and the Dolls don’t make it at all. Any why should we be surprised a “pop” group which started life as a “burlesque” act in the Viper Lounge before moving to be their own tourist attraction at Caesar’s Palace, isn’t selling empowerment to the girls who listen to them?

So lets look at some women who do make the cut in the influential women artists list – people like Janis Joplin(No 7), Chrissie Hynde (No 21) and Annie Lennox (No 22). Or for more up-to-date contributions Melissa Etheridge (No 53), The Go-Gos (No 63) and Ani di Franco (No 85). Or better still go explore the list for your own favourites!