Friday afternoon round up 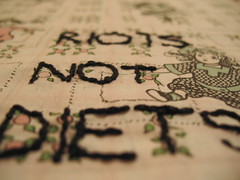 Womenspace posts an update on Southall Black Sisters’ unfortunate funding situation. It is particularly saddening to read that Refuge is apparently making a bid for the £100,000 of funding that SBS would very likely have received otherwise:

Shakesville continues its series on “funny” items that involve disembodied women. The “Bitchcruiser” is an attachment for a bicycle in the image of a naked woman, impaled on the frame. Click through at your own risk.

Sunny posts a link at Pickled Politics to a news story on men from the UK, US and Canada who travel to India and marry local women, scoop the hefty dowry and then leave, never to be seen again:

The men get married to vulnerable and unsuspecting Indian women – but shortly after the formalities have been completed, they return to the countries where they hold citizenship, often never to return.

Needless to say, they take huge dowries with them – often up to $60,000 – and renege on promises to begin the immigration process that would enable their wives to join them.

To make matters worse, many of the men who do this are already married.

Meanwhile, Fred Vincy at Stone Court reports on how people attempt to police attempts to break from the “gender orthodoxy”, by persuading parents and guardians to dress their small daughters in pink:

Yesterday, the owner of Baby’s day care, with whom we have become very friendly, bought Baby some clothes and shoes. This was very kind and appreciated. But everything was pink, a circumstance she mentioned. (I think she even said, “pretty in pink”.) Implication: That baby doesn’t wear enough pink.

Most men ranked “blue eyes” as the most important attribute followed by “long blonde hair”, with “occasionally wears glasses” as third.

Intelligence was not a priority, but she must be “very good looking”, have a “wacky personality” and “be optimistic”.

It’s not all completely depressing news, though! The Christian Science Monitor reports on a refuge for girls who want to escape female genital mutilation.

Five years ago, when Millicent was 13 years old, her father told her it was time to leave school and get married. But first, he said, the Masai adolescent must be circumcised.

Millicent had her own ideas; she had learned at a recent village workshop about the dangers of female circumcision and early marriage. But her family was unsympathetic. “I was circumcised, your mother was circumcised,” her grandmother told Millicent. Fighting back tears, she explains, “In my community, it is difficult for a girl who is not circumcised to get married.”

Today, after a cousin who helped her run away, Millicent lives at the Tasaru Girls Rescue Center in Narok. There, she has continued her schooling and received an alternative rite of passage – part traditional rituals, part health class – which she hopes will allow her to be accepted by her community, if not her family, in the future.

More from Sinclair at SugarButch Chronicles, too, who posts (NSFW) a rant against female masculinity from Craigslist, although I’m linking because of this moving response

Photo by cmt2779, shared under a Creative Commons license