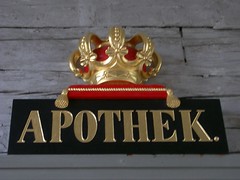 While the attorney general of Texas has nothing better to do than try and reinstate the state’s sex toy ban, the Swedish government is going to begin selling vibrators:

From The Local’s coverage, this fantastic quote:

“We are aware that sex is a very important part of everyone’s life. It is important to help people in this area, and there is a certain demand for the products,” [state pharmacy] Apoteket’s spokeswoman Elisabet Linge Bergman told The Local.

RFSU has produced a range of sex toys on behalf of Apoteket, which will be available for purchase in fifty stores nationwide for a one year trial period. But Apoteket has not yet decided exactly which products to stock.

Meanwhile, Sweden’s Liberal Party wants to make sex-ed compulsory. I can see the downsides to this (parents may just keep kids out of school completely if they object very strongly). But at the same time, this statistic is pretty compelling:

“It’s inappropriate that a rule about freedom from obligatory lessons which was meant to be used in exceptional cases has resulted in that every fourth foreign-born girl doesn’t participate in an important teaching moment in school,” write Party Leader Jan Björklund, Integration Minister Nyamko Sabuni, and Party Secretary Erik Ullenhag.

The three point to a doctoral dissertation which shows that 27 percent of foreign born girls don’t receive instruction in athletics, swimming, or sexual education.

And the deadline for all Norway’s big listed companies to fill 40% of board seats with women has been and gone. Today’s Guardian reports on the reaction, under the rather negative headline “you’re fired!” (what about all the women who heard “you’re hired!”?)

In 2002, only 7.1% of non-executive directors of ASAs were female. When they introduced the 40% quota, the government had expected a widespread rebellion, but by the final deadline for compliance – February 22 this year – only a handful of companies had failed to meet it. Most ASA boards have acquired between two and four new women in the past several months. It is not exactly an army on the march, but it is a step in the right direction and has allowed Norway to buck an international trend; in Britain, women fill only 14.5% of non-executive board positions and one in four of the FTSE 100 boards still has no women at all. The number of women holding executive directorships in FTSE 100 companies actually fell last year to the lowest level for nine years, according to research by Cranfield business school. And the picture is similar all over Europe. Only 2% of boardroom posts in Italy are held by women, and in Spain the figure is 4%.

There are lots of interesting details about how the quota has been sold to the population and then achieved in practice:

The quota was presented less as a gender-equality issue, and more as one driven by economic necessity. He argued that diversity creates wealth. The country could not afford to ignore female talent, he said. Norway has a low unemployment rate (now at 1.5%) and a large number of skilled and professional posts unfilled. “I could not see why, after 30 years of an equal ratio of women and men in universities and having so many women with experience, there were so few of them on boards,” he says.

But if it was Gabrielsen who set the terms of the debate in a way that made it less threatening to men, it was a woman who worked out how to make the quota achievable. In 2003, the NHO, the Norwegian equivalent of the Confederation of British Industry, decided to step up the pace of voluntary change. It headhunted 32-year-old Benja Stig Fagerland and gave her a two-year deadline to achieve a minor miracle.

Photo by pineapplebun, shared under a Creative Commons license