How masculine are you?

How do you even choose what to tackle here?! Well, this quiz, taken from the pages of something called ‘Real’ from 1954 is such a bold statement of what underlies some of the myths of masculinity in our culture, and pours such an awful lot of cold water on those fantasies of domestic bliss from that period, that I couldn’t resist. If you want to know how feminism benefits men, and how patriarchy hurts them, look no further: 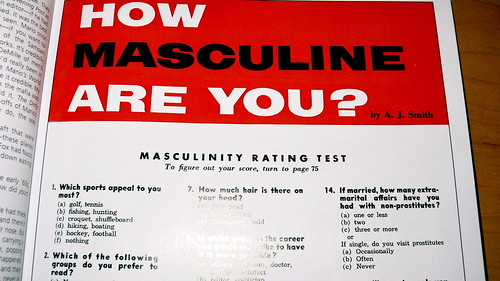 It’s a long quiz, but here are some notable questions:

3. What is your chief sexual outlet?

It should come as no surprise that the fuckers who wrote this test gave a score of zero to any readers who answer ‘d’.

5. How long are you about to continue during intercourse?

a) Two minutes or less

b) two to five minutes

7. How much hair is there on your head?

20. Which of the two choices do the following words make you think of?

TRAIN a) travel A) engine

DEVIL b) tempt B) hell

I particularly like how the sophisticates who wrote this have cunningly indicated the ‘correct’ responses with a capital letter.

OK, so this dates from some time ago. But I thought it was an interesting example of how men’s adherence to masculinity has been hysterically policed. It’s all set out there – ‘real men’ don’t sew, hate dirt or sleep with other men.