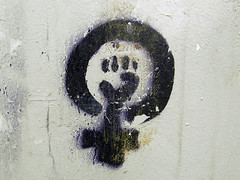 Having defended the Women’s Officer, we want to go on and campaign for officer positions to support these other liberation campaigns, and the establishment of an Equality Officer would give those who oppose liberation campaigns and politicised, representative Unions justification for opposing separate full time liberation officers. Self representation is essential for all these groups and this would not be guaranteed by an Equality Officer, who would have to be a disabled, Black lesbian in order to represent all the groups in the position’s remit.

Last night’s victory was an important one for the NUS women’s campaign, which has been faced with sustained attacks on women’s officers over the past few years, and we’re all happy happy beans, if a little the worse for wear after a night of celebrations! Big congratulations to everyone who was involved in the campaign, particularly to our current Women’s Officer, Bryony Shanks, who is a political genius!

Image by Eva the Weaver, shared under a Creative Commons licence.