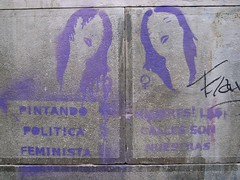 The English language is not alone in having deeply ingrained problems with sexism.

Because [email protected] involves the raising of consciousness, respect for oneself and for others (even females!) we make an effort not to sweep women under a male pronoun, as they have to live with normally, but to recognize them as equal players in this world, as they certainly are. To do this, we are lucky enough to already have a symbol on the keyboard that joins both the “a” and the “o” and makes sex-neutral/sex-inclusive words like “[email protected],” to include both types of friends at once.

(Hap tip to Lisa for introducing me to this excellent blog)

Photo by Gonzavision, shared under a Creative Commons license