New feature: not a happy birthday

Threatened, intimidated, bullied, violated: this is hospital birth as many mothers experience it. Amity Reed reports on the little-recognised crime of birth rape 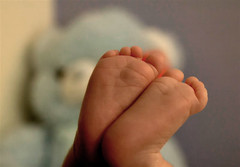 When Lynsey (not her real name) went into hospital to have her baby, she expected to leave a mother. After many hours of difficult labour and a wholly unexpected turn of events, she exited the building not only a mother but a victim of assault. Like thousands of other women, she was violated in the worst possible way when at her most vulnerable. What she had experienced was birth rape, and she would never be the same.

The idea of being raped while giving birth is difficult to imagine. In most people’s minds, rape means forced sexual intercourse where a penis is inserted, forcefully and without consent, into another person’s body. Some broaden that definition to include objects as well as body parts. But still, we often picture rape as an act of demented sexual anger and misogyny, perpetuated by sick individuals. In fact, rape is more frequently a display of power and control, a way to subjugate another human being. And it doesn’t just happen in dark alleyways, bedrooms tinged with the smell of alcohol and ‘mixed signals’, or in war zones. It can (and does) happen in some of the most respected and revered institutions in the land – hospitals.

A woman who is raped while giving birth does not experience the assault in a way that fits neatly within the typical definitions we hold true in civilised society. A penis is usually nowhere to be found in the story and the perpetrator may not even possess one. But fingers, hands, suction cups, forceps, needles and scissors… these are the tools of birth rape and they are wielded with as much force and as little consent as if a stranger grabbed a passer-by off the street and tied her up before having his way with her. Women are slapped, told to shut up, stop making noise and a nuisance of themselves, that they deserve this, that they shouldn’t have opened their legs nine months ago if they didn’t want to open them now. They are threatened, intimidated and bullied into submitting to procedures they do not need and interventions they do not want. Some are physically restrained from moving, their legs held open or their stomachs pushed on.

Photo by gabi_menashe, shared under a Creative Commons license