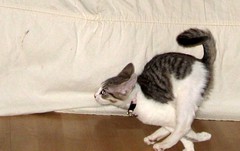 When people are forced to flee their homes because of domestic violence, what happens to their pets?

Well, the RSPCA in Wales is recruiting foster ‘parents’ for pets so that women (yes, it is mostly women) are not forced to leave them in the hands of an abusive partner, reports womensphere. The scheme is already up and running in England:

Bernice Dawes, from Bristol, urged Welsh families to look after pets; she has taken in 10 cats since 2004.

She said, “When the animals first come to you they are very traumatised. They will have seen a lot of violence or had very violent things done to them.”

But she added, “It’s very rewarding. You see them visibly relaxing.

“Just be patient and take your time and wait for the animal to come to you. Eventually the cat will come out and want to know you and be nuzzled and so on.”

Ms Dawes said she was sad to see the pets go, but delighted she could help people escape domestic abuse.

“I think a lot of women hold on for longer because they don’t want their pets to be harmed,” she said.

“Seeing an animal and owner happy when they are reunited makes it easier to part with the animal when it is time for them to go home.”

And just to underline the importance of the service being provided:

“A human victim of domestic abuse once said to us, ‘If I did not own pets then I would have left years ago.’ Our scheme offers such victims a safe home for their animals for as long as they need it. “If we can step in and break that cycle, we will be doing a tremendous amount to help both people and animals.”

Photo by Malingering, shared under a Creative Commons license